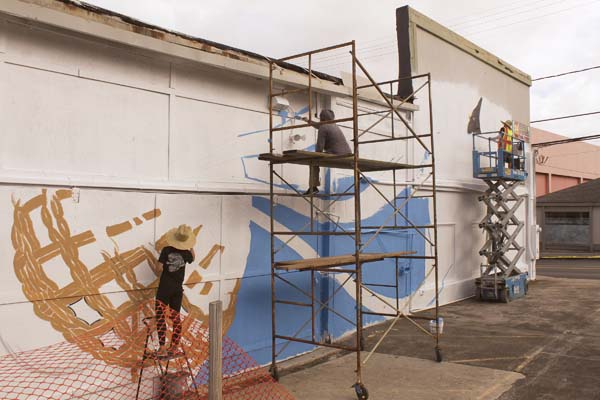 Maui artists Amanda Bowers (from left), Noble Richardson and Kirk Kurokawa work on their painting next to the Main Street Promenade on Monday afternoon in Wailuku. They are taking part in the “Sea Walls Maui – Mauka to Makai” project that runs through Saturday. The Maui News / MELISSA TANJI photos

WAILUKU — Former Maui resident Alexandra Underwood spent hours watching videos and reading articles on the effects of increased carbon dioxide in the atmosphere and acidification of the ocean that impacts everything from plankton to shellfish populations.

The 2013 Baldwin High School graduate is not a scientist but an illustrator, who is among about 20 artists the public will see in action in different places in Wailuku and Central Maui this week.

They will be working on murals as part of the “Sea Walls Maui — Mauka to Makai” project.

The painting began Monday with bits of color emerging on the walls by late afternoon. Work is expected to end Saturday.

The artists, who are volunteering their time, include at least seven from Maui or with Maui ties, along with a handful from Oahu and other countries, including Canada, New Zealand and the United Kingdom. 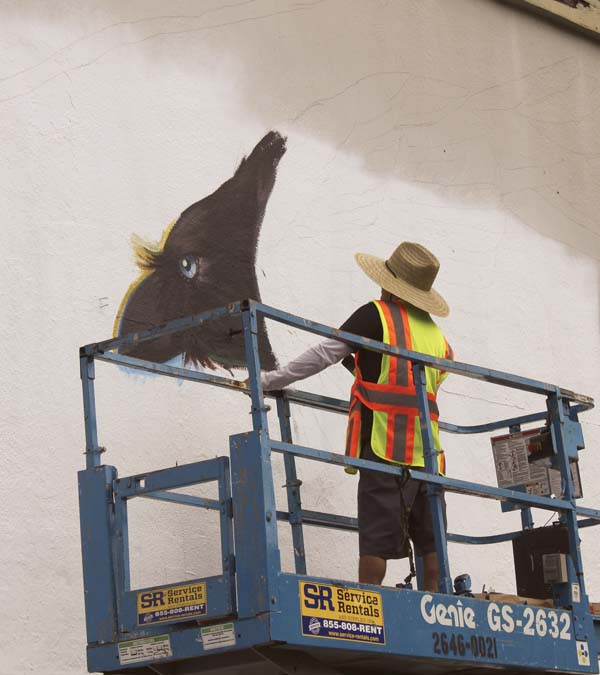 Maui artist Kirk Kurokawa paints the head of an alala, or Hawaiian crow.

The mural project is hosted by the PangeaSeed Foundation and Small Town * Big Art. The goal is to “catalyze positive change” for the oceans in the local community and among visitors and to reinforce the connection of upstream, noncoastal towns, such as Wailuku, to the sea, according to a news release.

The large-scale works by invited artists will act as educational tools and conversation starters. On Monday, artists, including Underwood, talked about their projects when people would stop by and ask questions.

With the ocean acidification topic, Underwood and painting partner Joey Rose from Northern California, where Underwood now lives, drew various images in pencil in their sketchbooks to prepare for their piece. They had their sketchbooks with their rough images with them on-site Monday morning before they began to paint on the side of the building at 1975 Vineyard St.

Sketches included jagged lines with Rose playfully writing “ACID” in capital letters with liquid depicting acid spewing out of the letter “A.” 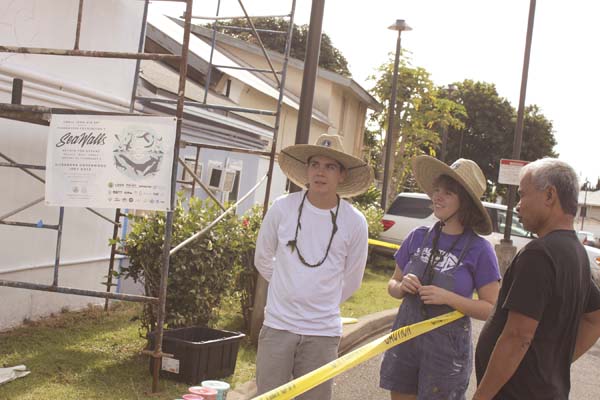 But those were not the images the artists eventually chose.

Using digital technology, the two artists came up with a colorful sketch of orange-pinkish coral and yellow tang, though colors could change, they said. Underwood said there will be a plume of acid in the mural.

“It was hard to come up with,” Underwood said. “You don’t want to make it depressing, but you want people to like it.”

To get the image from a digital program to the 40-foot-by-30-foot wall, they used a projector to shine the image onto Ray Angel’s building Sunday night.

“We get a marker and trace,” Underwood said.

Angel said other businesses were allowing murals to be drawn on their buildings, so he jumped in too. Angel has a 10-year-old daughter who is an aspiring artist.

It rained late Sunday night, so the tracing was only half done, said Underwood, who designs the popular PopSockets phone grips for cellphones. Her designs can be found on PopSockets sold in Target in Puunene.

Another Maui artist, Amanda Bowers, who is working on a mural at 2020 Main St., explained that artists use a projector to blow up their small image on a larger canvas. The sketches translate better that way to the larger-scale wall.

She explained that freehand drawing a sketch onto a large wall is much different than drawing a sketch on paper. Bowers, a 2008 graduate of Baldwin High, said there are various tools artists use to sketch out their larger drawings, including a Chinese marker that is waterproof and oil-based.

Like the team of Rose and Underwood, Bowers said her group of artists worked on their ideas both the “old school” way of pencil-and-paper sketches and the “new way” by using digital programs to sketch and send each other their ideas.

The group’s artwork on the Iao Valley side of 2020 Main St., next to the Main Street Promenade, will feature a hina’i, or basket fish trap, he’e, or octopus, and the ‘alala, or the Hawaiian crow. The painting will depict the environment from mauka to makai, or from mountain to ocean.

The physical model of the basket fish trap was made for the artists and was on location Monday.

“We want to create something to educate people and spark interest,” Bowers said.

Kurokawa, who in 2017 had his painting of former Gov. Neil Abercrombie unveiled as part of the Art in Public Place Program, said he was the oldest on the mural project at age 44. Since his experience with Abercrombie’s portrait, he got into the idea of public art.

“It’s about getting art out to a wider audience. I can’t even afford my own paintings,” he joked, but added public arts projects may start at $1,000. With the current mural work going on, everyone can see it, Kurokawa said.

Even as the message of protecting the ocean is aimed at the public, the artists and the project are promoting conservation and sustainability themselves. Lunches will be provided in metal containers with reusable utensils.

And no paint and water will be dumped onto the ground and into storm drains. They will be collected by project officials and disposed of properly with water separated from the paint, the artists said.

Project areas include Baldwin High School, where artists and students will collaborate to paint walls there. Other painting spots include the Vineyard Street side wall of Maui Sporting Goods, Fiesta Time along Lower Main Street and Jace & Kim Collision Specialists along Mill Street, which is a collaboration with the Coral Reef Alliance, said Akira Biondo, PangeaSeed Foundation director of operations and Sea Walls Maui co-director.

The PangeaSeed foundation is an international nonprofit that has created 300 murals in 14 countries with a roster of more than 250 professional artists. Maui Redevelopment Agency, the county Office of Economic Development, Pacific Whale Foundation along with other local and national organizations have partnered to fund the project, according to Maui County.

The project on Maui was inspired and coordinated by Maui-born artist Matt Agcolicol.

If someone were to pay for the project, Biondo said, it could easily cost $350,000 when adding up the value of all the volunteer work, donations and in-kind donations received.

Another Maui artist on the project is Gregg Kaplan. Former Maui resident Roxanne Ortiz, who resides on Oahu, also is participating. She is part of the art duo Wooden Wave with husband Matthew Ortiz.

In keeping with the sustainability and ocean preservation theme, a cleanup of Kaehu Bay in Waiehu in partnership with Sustainable Coastlines Hawaii will take place from 1:30 to 4 p.m. Saturday, with check-in at 1 p.m. A luau potluck will be held afterward for participants. For more information, go to Sustainable Coastlines Hawaii’s Instagram account.

This is a composite of sky photographs taken by Pan-STARRS and its 1.8-meter telescope atop Haleakala. UH Institute for Astronomy photo

Kamehameha Schools Maui and Campbell players, including the Warriors’ Teija Tuitele (10), compete for a Kamehameha corner kick during the first half of the Warriors’ 1-0 loss to the Sabers in a state tournament first-round match Monday afternoon at Kanaiaupuni Stadium. The Maui News / MATTHEW THAYER photos

The Warriors’ Lilia Wietecha-Davis heads the ball over the Sabers’ Cayla Nakatsukasa and Hokulei Ishikawa.

The Warriors’ Brynn Rodrigues (right) competes for the ball with the Sabers’ Shaylee Limatoc.

Maui artists Amanda Bowers (from left), Noble Richardson and Kirk Kurokawa work on their painting next to the Main Street Promenade on Monday afternoon in Wailuku. They are taking part in the “Sea Walls Maui – Mauka to Makai” project that runs through Saturday. The Maui News / MELISSA TANJI photos

Maui artist Kirk Kurokawa paints the head of an alala, or Hawaiian crow.