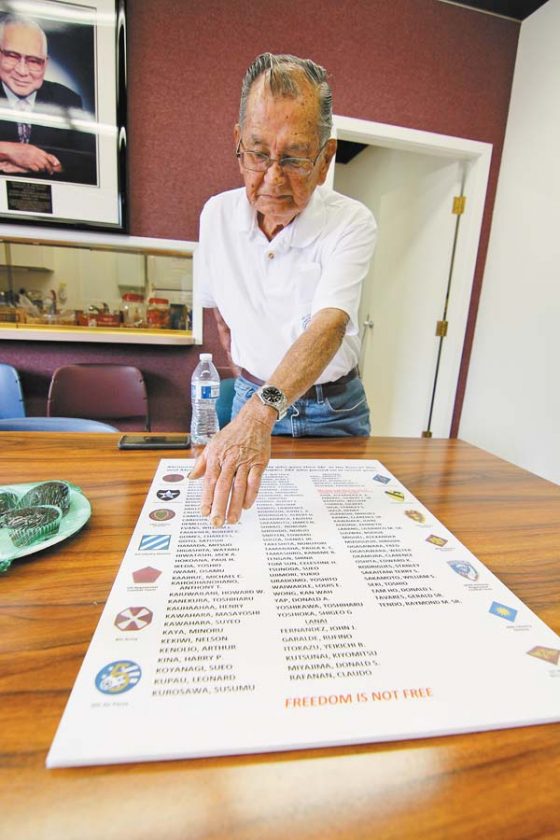 Korean War veteran Warren Nishida of Kula points out some of the familiar names on the list of Maui County veterans killed or missing in action during the Korean War. The Korean War Veterans Association of Maui No Kai Oi 282 Chapter will be holding its annual candlelight service at 5:30 p.m. Tuesday at the War Memorial Gym in Wailuku. The Maui News / COLLEEN UECHI photos

WAILUKU — On Oct. 16, 1952, Warren Nishida was hunkered down in a foxhole on a Korean hillside when a mortar shell struck him in the shoulder.

Badly injured, Nishida crawled out of the hole and was trying to walk to safety when his sergeant stopped him and told him they’d call a medic instead.

“When they laid me down and both of them were on my side, another round came in right next to us,” Nishida recalled. “Killed the medic instantly and the sergeant in an instant. So without both of them I would have been killed because they protected me.”

The Battle of Triangle Hill was one of the bloodiest of the Korean War, nearly wiping out Nishida’s entire regiment. But almost 70 years later, it’s one of the lesser-known conflicts from a lesser-known war that never really ended. 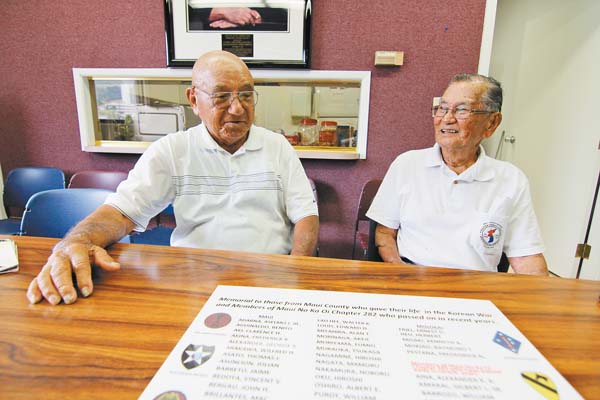 Korean War veterans Moses Kahalekulu (left) of Waiehu and Warren Nishida of Kula talk story Sunday after sharing some of their memories of the Korean War.

The Korean War is known as “the Forgotten War” not only because it was sandwiched between the cross-continental World War II and the controversial Vietnam War in Southeast Asia but also because military censorship of the press kept many things — including embarrassing defeats and military criticism — in the dark. The fighting ended with an armistice on July 27, 1953, but no peace treaty has ever been signed.

War broke out in Korea not long after the end of World War II. In fact, it occurred so shortly after that American troops were equipped with outdated and at times malfunctioning weapons left over from World War II, Nishida recalled.

Formerly under the Japanese empire, Korea was divided along the 38th parallel between Soviet forces in the north and U.S. forces in the south after World War II. Tension at the border erupted into all-out conflict when the North Korean Peoples’ Army invaded the south on June 25, 1950.

Nishida, the Kula-born son of a cabbage farmer and a housewife, was drafted on Sept. 26, 1951. He’d graduated from Maui High School in 1949, and since he didn’t have money to attend college, he returned to the school for post-graduate programs. He hadn’t been there long when he was drafted and later shipped out to Korea in December 1951.

Nishida was stationed in Kumhwa in Central Korea, an impoverished rural area of mountains, valleys and farmland. As part of the Army’s 7th Division, 32nd Infantry Regiment, Nishida was near the 38th parallel, conducting reconnaissance and ambush patrols that involved dangerous treks into North Korean territory to capture enemy troops for intelligence.

Nishida saw very little action for the first several months, until U.S. forces decided to take a place called Sniper Hill that was a prime spot for observation. Nishida was being held in reserve when he started to see wounded troops coming back from the battlefield.

“I was so damn scared for a moment,” he said.

The troops got the orders to move up, and about halfway up the ridge, they were bombarded by mortar fire and “screaming rockets.”

“We were ordered to dig in, and I was surprised how fast you can dig a foxhole,” Nishida said. “In no time, I dug a hole and jumped right in.”

Nishida was in the foxhole when he was hit by the mortar shell. That’s when he attempted to walk to safety and was stopped by the sergeant who would later be killed along with the medic. Nishida said because they were hovering over his body working on his injuries, they took the brunt of the mortar strike.

Falling in and out of consciousness, Nishida rolled himself down the hill, where his assistant squad leader found him and carried him to safety on a jacket stretched across two rifles.

Nishida was flown out to a hospital in Tokyo where he spent three months and underwent four operations to his injured arm, head, foot and shoulder. He was later flown to Tripler Army Medical Center on Oahu, where he spent a year and a half undergoing about a dozen operations, including bone and skin grafts. And yet, he recalls it as “the best time I ever had” because he got to gamble and play cards with his fellow veterans.

While Nishida does have dreams of combat sometimes, the flashbacks don’t bother him too much, and he’s been able to adjust to civilian life. His mantra when it comes to his war memories is to “just forget it and keep on living.” He finished his studies, got a job at a mechanical drafting firm in Los Angeles, married his wife, Misa, and moved back home to Maui where he worked for Tanaka Engineering.

Some Korean War veterans also went on to serve in other conflicts, like Waiehu-born Moses Kahalekulu, a 1952 Kamehameha Schools Kapalama graduate who joined the Army after high school and did maintenance on trucks and equipment in Korea. Kahalekulu re-enlisted after the Korean War and was sent to Europe, where he built bridges as a combat engineer, and then served two tours in Vietnam. He made a total of seven tours overseas — including a return to Korea, where he met his wife, Chun Pong, — before retiring from the military in 1976.

“War is war,” the 86-year-old Kahalekulu said when asked to compare the Korean War to other tours of war he served. “In the military you gotta do what you gotta do to survive.”

About two years ago, Vietnam veteran David Fukuda approached Korean War veteran Mike Takamatsu about putting together a museum exhibit on the Korean War. Fukuda, the son of a decorated 442nd Regimental Combat Team nisei veteran, has conducted many oral histories with World War II service members. He told Takamatsu that the problem was they waited too long, and that many of those who served in World War II had already died by the time they began compiling their stories. He didn’t want to see the same thing happen with the Korean War veterans.

Takamatsu said it was hard at first, because “90 percent of them wouldn’t have anything to do with it.” However, he tried to explain that he was “more interested about what you did before you went into the service and what you accomplished after the war.” So far, he and Fukuda have been able to interview more than 20 veterans.

“I kept reminding them, ‘I was just as bad as you,’ ” Takamatsu said. “I didn’t want to have anything to do with the war for 60 years.”

The veteran said that changed when a church member told him about the Revisit Korea program, which invites Korean War veterans back to the country as a way of showing their gratitude. In 2011, Takamatsu and his wife, Myriam, traveled to South Korea, where they visited historic sites and participated in special ceremonies that Takamatsu said “really opened my eyes.” He recalled how well they were treated and how everyday Koreans came up to tell the veterans how, if it weren’t for them, they might be struggling like their neighbors to the north.

“It changed my attitude completely,” he said.

Takamatsu hopes to get a Korean War exhibit in the Nisei Veterans Memorial Center by mid-September. The job of gathering oral histories grows more important by the year. When Takamatsu first joined the local Korean War veterans chapter about seven years ago, there were 51 members; now there are 37.

Nishida, now 89, recalled a speech he heard once about how a veteran can die twice — once when he or she is killed in action, and another time when he or she is forgotten. That’s why he still remembers guys like Donald Yap, a Baldwin football player who went missing in Korea. It’s why he remembers his classmates Gary Hashimoto and Jack Hiwatashi, “inseparable” friends who served in different areas to avoid being killed in action at the same time. Hashimoto learned Hiwatashi had been killed when he found his coffin aboard a ship bound for Hawaii.

On Tuesday, the Korean War Veterans Association of Maui No Ka Oi 282 Chapter will host its annual candlelight service to remember all Maui County veterans killed and missing in action in Korea. The ceremony will take place at 5:30 p.m. at the War Memorial Gym and is open to the public.

A memorial is seen at the site where a Beechcraft King Air twin-engine plane crashed Friday evening killing 11 people near the fence surrounding Dillingham Airfield on Oahu. No one aboard survived the skydiving plane crash. The flight was operated by Oahu Parachute Center skydiving company. Honolulu Star-Advertiser / DENNIS ODA photo via AP

A crowd including Navy sailors in white uniforms attend the christening ceremony for the future USS Daniel Inouye at shipbuilder Bath Iron Works on Saturday in Bath, Maine. Inouye, the ship’s namesake, was a Medal of Honor recipient who broke racial barriers and represented Hawaii in the U.S. Senate for a half-century until his death in 2012. AP photo

Irene Hirano Inouye smiles after breaking a bottle of Champagne on the bow of a warship bearing the name of her late husband, Sen. Daniel Inouye, during a ceremony at Bath Iron Works on Saturday in Bath, Maine. Bath Iron Works photo via AP

Korean War veteran Warren Nishida of Kula points out some of the familiar names on the list of Maui County veterans killed or missing in action during the Korean War. The Korean War Veterans Association of Maui No Kai Oi 282 Chapter will be holding its annual candlelight service at 5:30 p.m. Tuesday at the War Memorial Gym in Wailuku. The Maui News / COLLEEN UECHI photos

Korean War veterans Moses Kahalekulu (left) of Waiehu and Warren Nishida of Kula talk story Sunday after sharing some of their memories of the Korean War.

Alex Chiarella holds the championship trophy after winning the Lethbridge Paradise Canyon Open on Sunday for his first win on the Mackenzie Tour (PGA Tour Canada). The 25-year-old from Makawao shot a 3-under 68 in the final round to win by one shot. Mackenzie Tour / Zenon Andreo photo

Marlins starter Jordan Yamamoto pitches during the first inning of Miami’s 6-4 win over the Philadelphia Phillies on Sunday. AP photo