MPD officers return to Maui after being called to Mauna Kea 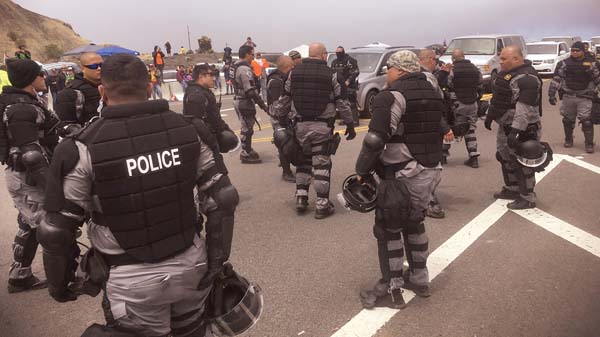 WAILUKU — About two dozen Maui Police Department officers are back in their regular jobs after spending a week on Hawaii island assisting Hawaii County police officers at the base of Mauna Kea, where protesters have gathered to oppose the start of construction of the Thirty Meter Telescope.

“Initially it was to assist with the safe convoy of vehicles to the summit,” said Assistant Chief John Jakubczak, who was with the MPD officers on Hawaii island. “By the time we got there, there were demonstrators at the access road.

“Our objective and our role was to assist the Hawaii County Police Department.”

The MPD officers went to Hawaii island on July 16 and returned to Maui on Tuesday, Jakubczak said at a Maui Police Commission meeting Wednesday at the Wailuku Police Station.

“We were activated at one point when the roadway got congested to the point where the roads had to be closed,” Jakubczak said. “Vehicles were being parked and abandoned.

“The purpose was to make sure everything was safe for everyone on both sides of this situation. Once the roadway was cleared, we were pulled back. And for the most part, the rest of our time there was in a support role if need be.”

While the county is paying the officers’ salaries, the state attorney general’s office will reimburse the county for overtime costs for the officers, said Victor Ramos, who is the acting Maui police chief while Faaumu is on vacation until Monday.

Under state law, if one county police chief requests assistance from another police chief and there’s an agreement between the chiefs, officers can go to the other jurisdiction “with all authority and rights,” Ramos said.

“Not in this scale, but it happens quite often,” Ramos said at the Police Commission meeting.

He said there are state task forces, many of them drug-related, that include officers from county police departments as well as federal law enforcement officers.

When Green Harvest marijuana eradication was occurring throughout the state, “every county would send officers to participate in that,” Jakubczak said.

In a lawsuit filed last week in 3rd Circuit Court on Hawaii island, cultural practitioner and Hawaii Community College professor E. Kalani Flores alleged that police violated state law by having Honolulu and Maui police officers assist Hawaii island officers at the Mauna Kea protest. According to the request for a temporary restraining order and preliminary injunction, the law prohibits county police officers from exercising their police powers beyond their territorial jurisdiction unless it is related to an investigation that originated in their home county.

On Tuesday, the same day notice was given of a TRO hearing, the Honolulu Police Department filed a motion to remove the case to federal court. After amending the complaint to omit references to violations of the federal constitution, Flores’ attorney, Peter Olson, is asking that the case be remanded back to state court.

Meanwhile on Maui, officers also have been monitoring daily demonstrations against the Thirty Meter Telescope.

One driver who was honking his horn in support of protesters along Honoapiilani Highway and Kaanapali Parkway in Lahaina was arrested at about 6 p.m. Monday after police recovered an unloaded bolt-action rifle, ammunition and marijuana in a search of the silver sport utility vehicle he was driving.

After driving slowly past sign-waving protesters, the southbound driver had stopped on the road, “creating a hazardous situation, especially at that time of day,” Jakubczak said.

He said officers who initiated a traffic stop for impeding traffic approached the driver and saw three rounds of loose ammunition in an open ashtray. More ammunition, a butterfly knife, brass knuckles and 40.7 grams of marijuana were found in a search of the vehicle, police said.

He said organizers have called to let police know where demonstrations are occurring.

“We’re not going to send anybody there to stay with them the whole time, but we will make periodic checks on them,” he said. “So far, they have been organizing and keeping everyone safe and orderly.”

At a demonstration at Kahului Shopping Center on Monday, an organizer called to ask for police assistance so demonstrators could safely cross Kaahumanu Avenue to Hoaloha Park, Jakubczak said.

“We had ample staffing to answer all calls for service,” he said. “The community should not be concerned about that.”