Panel votes to create committee to look into EMI system 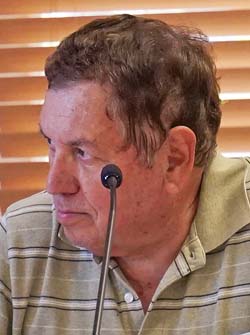 WAILUKU — The county Board of Water Supply voted Thursday to establish a subcommittee that would research the feasibility of buying and maintaining the East Maui Irrigation system, with many members suggesting the county wouldn’t be the best fit to acquire the system.

The move comes in the wake of a legislative session that leaves Upcountry residents in the crossfire between supporters and opponents of revocable water permits for East Maui streams. Meanwhile, Upcountry remains under drought conditions, with the Department of Water Supply asking for voluntary conservation since May.

Public water users Upcountry have been in limbo after a bill that would have extended water permits for Alexander & Baldwin, along with utilities and small farmers statewide, failed at the state Legislature in May.

Owned by A&B and Mahi Pono, EMI uses 74 miles of tunnels, ditches and siphons to bring East Maui water westward for agricultural and public domestic uses. A&B holds a permit to take water from East Maui streams on state land and deliver it via EMI to 35,000 Upcountry residents. Because the bill failed, renewal of that permit, which expires in December, was put in question. It also leaves end water users such as 35,000 Upcountry residents in uncertainty as well.

He added that water as a public trust shouldn’t be in the hands of a corporation.

“We are trying to find an alterna tive way of delivering clean, safe water to (the public) as a public utility instead of a weird situation where a corporation pretty much tells us what, when and how we’re going to get our water, which is kind of spooky,” he said last month.

Eight of the nine members voted Thursday afternoon for the temporary investigative group, with one member, Buddy James Nobriga, abstaining from the vote.

“I try to look at both sides,” Nobriga said. “For me, this TIG is to basically . . . take the ability of the ditch and Mahi Pono to control how water gets to where it gets to, away.”

Member Hanna Mounce said the community is asking for someone to explore the possibilities.

“I would like to vote in favor of continuing with the TIG because I think we owe it to the community that has suggested that we investigate the feasibility of this over and over again,” Mounce said, adding that she does not think the county should take over EMI. “It has been asked of us many times and I think we should follow through.”

Another vote named members Franco, Shay Chan Hodges, Joseph Aquino and Antonette Eaton to the group, and appointed Franco as chair and Hodges as vice chair.

Member Dean Frampton said that based on public reports, EMI requires about $2 million per year to maintain. However, the county pays 6 cents for every 1,000 gallons of water used, which equals about $65,000 annually for more than 1 billion gallons per year in demand, he said.

“That’s a good deal,” said Frampton, who also said the county should not be the one to take over EMI.

Testifiers supported the investigative group but many were against the county acquiring the water delivery system.

Dave DeLeon of Haiku, who supported the formation of the group, commended the board taking leadership on the important issue.

“The EMI system is an irreplaceable community asset that must be maintained, either privately or publicly,” he said. “The loss of this asset would be an inexcusable disaster for the Upcountry community and Maui in general.”

Albert Perez of Maui Tomorrow also testified in support of the group and suggested that the group explore different types of entities other than the county, as well as have a neutral engineering firm assess the current condition of the ditch system.

“I don’t like the idea of the county owning it,” he said. “I think the county is going to be too politically exposed. And so I would like to have some other entity that people are appointed to that would be at least partially insulated from the politics at the moment.”

Kula resident Dick Mayer testified that a public utility could take over EMI and it could be regulated, much like Maui Electric Co. is regulated.

Simon Russell, a farmer and managing member of Hui O Malama Aina LLC, testified in support of the TIG and hopes it will consider the formation of a B Corporation to hold, manage and maintain the privately held lands in the watershed and other water delivery systems around Maui. Certified B Corporations are businesses that meet standards of verified social and environmental performance, public transparency and legal accountability to balance profit and purpose, according to its website.