Committee set to consider resolution to settle the case 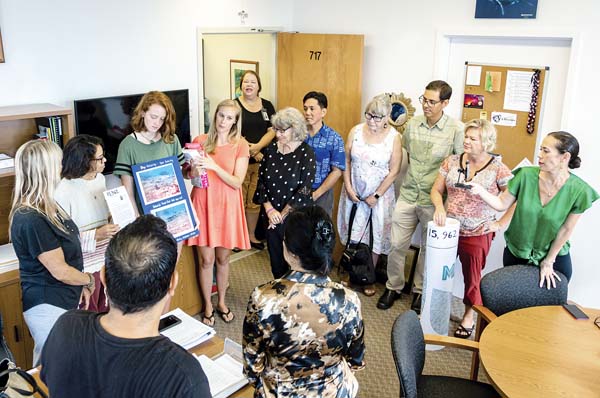 Four community groups that sued Maui County over its use of injection wells in Lahaina have brought forward petitions bearing 15,962 signatures of people from across the country — 448 from Maui County — who are asking the county to withdraw its case from the U.S. Supreme Court.

In 2012, the four groups sued the county over its use of injection wells at the Lahaina Wastewater Reclamation Facility, saying the effluent was reaching the ocean and impacting sensitive coral reefs at Kahekili Beach.

The county had argued that the discharge of treated wastewater from injection wells did not require permits under the Clean Water Act because the pollutants did not flow directly into the ocean but rather flowed indirectly through groundwater.

The U.S. District Court in Hawaii disagreed, ruling in 2014 that the county’s use of injection wells was a violation of the Clean Water Act. The county appealed to the 9th U.S. Circuit Court of Appeals and lost in February 2018. The court denied the county’s request to reconsider the ruling in March 2018.

However, earlier this year, the U.S. Supreme Court agreed to hear the case after circuit courts around the country were split over their rulings on the reach of the Clean Water Act. The case could be heard in November, according to Earthjustice.

The petitions call for the county to settle the case instead of taking it to the nation’s highest court, and to instead seek alternative long-term solutions.

“This case is being closely and eagerly watched by some of the worst polluters in the country,” Earthjustice attorney Mahesh Cleveland said in a statement Wednesday. “The loophole the county seeks would allow industrial and municipal polluters to evade regulation under the Clean Water Act simply by moving their discharges just short of the shores of navigable waters, or disposing of pollutants via groundwater. A Supreme Court ruling in the county’s favor would have serious negative impacts on water quality nationwide.”

Maui County spokesman Brian Perry said in a statement Wednesday afternoon that “the petition doesn’t speak to the merits of our appeal to the U.S. Supreme Court.”

“It seeks to create fear of national impact over what is a home-rule issue for Maui County and its right to appeal a 9th Circuit decision that creates a costly and potentially impossible regulatory burden on municipalities and taxpayers,” Perry said.

He added that “the 9th Circuit ruling in 2018 is a new interpretation of a federal law that dates back to the 1970s.

“Maui County has been and continues to operate its Lahaina wastewater injection wells safely and in compliance with permits under the federal Safe Drinking Water Act and the state equivalent statute,” Perry said.

Mayor Michael Victorino said that “regardless of what happens with this lawsuit, Maui County’s goal is to recycle 100 percent of its wastewater as soon as possible.”

On Tuesday, the council’s Governance, Ethics and Transparency Committee will consider a resolution that would give the council a say over a settlement in the case. The meeting will take place at 9 a.m. in Council Chambers.

American women seek more than $66M in damages from US Soccer

Lakers return from break with win over Grizz