No heat data for Saturday, Sunday; it is repaired Monday 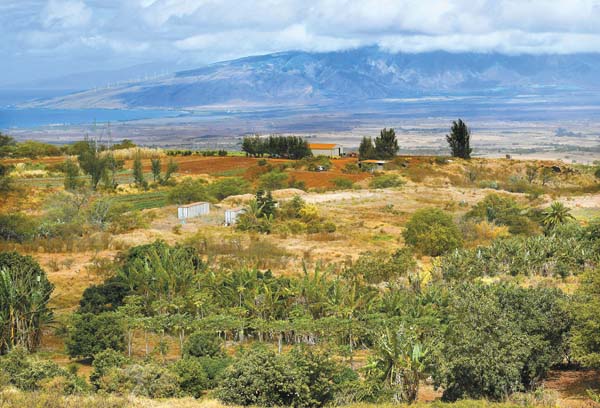 The central valley as viewed from the Kula Ag Park in Omaopio has been dry and hot the last couple of months with temperatures in the 90s. The parched conditions with dry brush and trees have helped fuel large wildfires recently. This photo was taken on July 30. The Maui News / MATTHEW THAYER photo

The National Weather Service said the downed weather gauge at Kahului Airport was repaired Monday but that warm weather on Saturday and Sunday couldn’t be confirmed as data was lost.

Meteorologist Vanessa Almanza said Tuesday that NWS did not know what broke and deferred questions to the Federal Aviation Administration, which repaired the gauge.

FAA also said the problem was a mystery as technicians investigating the issue Monday found it had resolved itself before fixes needed to be made.

NWS’ Automated Surface Observing System feeds winds, temperature and dew point information to an FAA system. Over the weekend, there may have been a communication issue between the two systems, according to Ian Gregor, FAA Pacific Division public affairs manager.

“We don’t know what the problem was,” he added.

Despite reports of record-setting temperature over the weekend, Almanza said NWS cannot confirm information on Saturday or Sunday.

“It was lost,” she said Tuesday.

Before the gauge broke, Kahului experienced a record-setting temperature on Friday of 95 degrees, which broke the previous record of 92 degrees set on the same day in 2004.