As space opens up, challenges grow

Experts say it will take a team effort to manage congestion 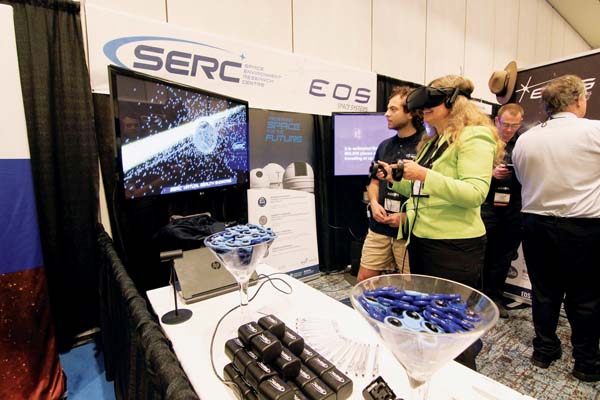 WAILEA — Public school students in Irvine, Calif., have something in common with Elon Musk’s company, SpaceX — both can lay claim to satellites that have been launched into orbit.

These days, it seems nearly everyone, from students and tech giants to various countries, has a shot at space. But with all that innovation and access comes a challenge — tracking all those objects and keeping them in check.

“It shouldn’t escape any of us that the International Space Station routinely gets warnings about collisions, and it’s operating in lower orbit,” said U.S. Air Force Gen. John Shaw, one of the keynote speakers at the 20th annual Advanced Maui Optical and Space Surveillance Technologies Conference. “As we continue space exploration out to the lunar sphere, that challenge remains.”

More than 900 people in government, academia, business and the military gathered at the Wailea Beach Resort-Marriott, Maui, this week for the AMOS Conference, hosted by the Maui Economic Development Board. Many discussions focused on the rise of objects in space and how the international community can work to control that congestion.

“I’m not a scientist by education, but what I do know is in the 20 years of this conference, we have seen the space catalog get more and more densely populated,” said Leslie Wilkins, MEDB president and chief executive officer. ” ‘Congested’ is the word that you hear. And so we are definitely at the point that we need international collaboration and transparency on keeping space safe.” 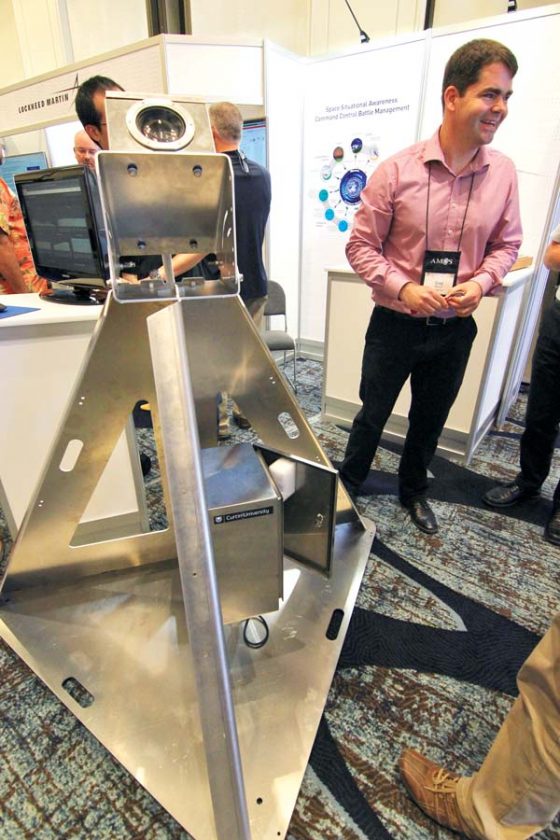 Greg Madsen of Lockheed Martin gives conference attendees an overview of the FireOPAL, a camera that allows the company to capture images of satellites in space.

Since 1957, there have been about 5,450 rocket launches (excluding failures), according to European Space Agency data as of January. These launches have placed about 8,950 satellites into orbit; about 5,000 of them are still in space and about 1,950 of them are still functioning. Nearly 23,000 objects — including satellites, rocket bodies and fragments — are being tracked through space.

Francesca Letizia, a space debris engineer working for ESA and another keynote speaker, said that the number of launched spacecraft has grown in recent years, from about 100 every year to 300 or 400. And, satellites are getting smaller as universities build more of them and commercial companies shift to using many little satellites to perform a mission.

Ralph Dinsley, director of Northern Space and Security Ltd. (NORSS) in the U.K., explained that “products from space touch every aspect of our life,” from GPS to weather forecasting.

“So if we should lose any of that, then obviously it will have an impact on our life,” Dinsley said. “It wouldn’t be catastrophic. It would throw us back. It would slow down our pace.”

Dinsley said the space industry has been trying to reduce debris through such methods as pushing rocket bodies back down so that they burn up during reentry into the Earth’s atmosphere. 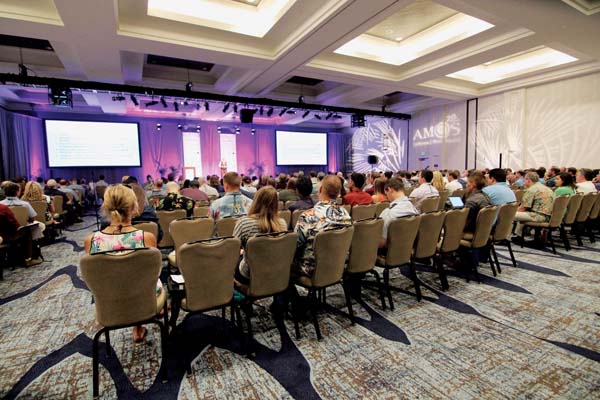 More than 900 experts representing the government, academics, business and the military attended the conference.

“One of the biggest problems of the ’80s and ’90s was the proliferation of rocket bodies in space,” Dinsley said. “But that’s reduced in number even though there’s more launches because they’re getting rid of them quicker. Or you get the SpaceX pieces that are actually reusable . . . which has got to be one of the coolest things.”

In May, SpaceX launched the first 60 satellites in its Starlink fleet, part of efforts to provide global broadband internet. David Goldstein, director of special programs for SpaceX, said that the company aims to reduce its impact on the space environment by operating satellites at an orbit altitude of 550 kilometers (just over 340 miles), a sort of “sweet spot” it’s found after studying collisions and debris.

“By doing that, if a satellite happens to become unmaneuverable, then it will naturally decay and reenter the Earth’s atmosphere after 1 to 5 years,” Goldstein said, adding that this is below the international standard of allowing debris in space up to 25 years.

Because the International Space Station also operates at a lower orbit, Goldstein said that SpaceX could consider operating even lower in the future.

As for navigating space traffic, the company relies on the U.S. Air Force’s Combined Space Operations Center (CSpOC), which tracks and predicts the future locations of all debris and satellites. They provide updates to companies like SpaceX and many other satellite owner-operators. 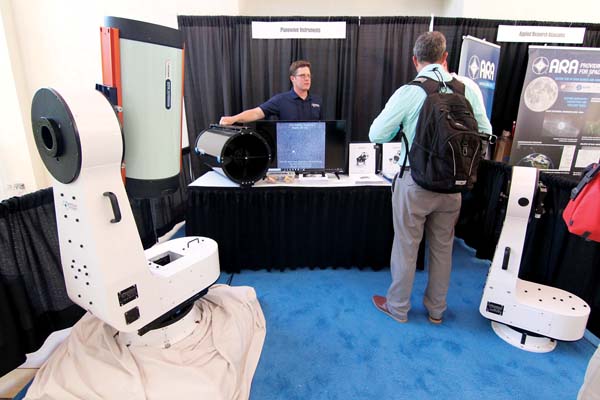 A conference participant stops by to check out the devices at Planewave Instruments’ booth.

Goldstein explained that the growing congestion is not only due to the rise of satellites.

“As technology on the ground gets better, we’re able to see smaller and smaller debris objects, and so the largest growth of the objects that we’re seeing is more because of our ability to detect them than the forming of new objects,” he said.

Goldstein added that space operations are a team sport, and that it’s up to everyone to be transparent and collaborative so space can be used in the long term.

“Even if we’re competitors, we all have the same goal to keep space sustainable,” he said.

But companies and countries aren’t always compliant. While some satellites in low Earth orbit (below 2,000 kilometers or about 1,200 miles) will burn up on their own, others need a bit of a push. And of those satellites, only 15 to 25 percent are actually disposed of. Letizia said 90 percent is ideal. However, there’s hope for improvement — over the past 20 years, the disposal of rocket bodies in low Earth orbit has gone from 20 to 80 percent.

Letizia said some of the ways to manage space congestion include ensuring spacecraft don’t explode and create extra debris. This is done by releasing all energy on board once a mission is completed.

“Another aspect that is important is once your mission is finished, is you have to be sure you leave the area where you are operating,” she said. “For example, try to reenter toward the Earth so that new operators can go and use these orbits and you don’t have the problem of the defunct satellites going around.”

Jeff Chadwick of Lockheed Martin, which developed the Space Fence in the Marshall Islands that helps the Air Force track objects in space, said that both the public and private sector are looking for more ways to partner up and manage space.

“For example, there’s a lot of commercial sensors popping up all over the place,” Chadwick said. “The more you can track things up there, the more eyes you have on it, the better information you can use to make decisions about what you’re going to do about it. And we’re seeing a lot more cooperation between the government and the private sector to make sure there is a fundamental awareness of what’s going on.”

Levi “Pio” Aki Jr. appears on Thursday in 2nd Circuit Court. Aki was placed on four years’ probation and was given credit for about six months he previously spent in jail for felony threatening of a man who was renovating his house in Kahakuloa Village five years ago. The Maui News / LILA FUJIMOTO photo

Greg Madsen of Lockheed Martin gives conference attendees an overview of the FireOPAL, a camera that allows the company to capture images of satellites in space.

More than 900 experts representing the government, academics, business and the military attended the conference.

A conference participant stops by to check out the devices at Planewave Instruments’ booth.

Devon Sa-Chisolm and the 3-0 Lunas take on the 0-3 Sabers on Saturday at War Memorial Stadium. The Maui News / MATTHEW THAYER photo

Jaguars quarterback Gardner Minshew scrambles away from Titans linebacker Jayon Brown during the first half.

Titans quarterback Marcus Mariota gets up slowly after being sacked in the second half of Tennessee’s 20-7 loss to the Jacksonville Jaguars on Thursday. AP photos

Serenity Texeira-Medeiros holds up a ribbon in K-2 goat undecorating.

Tim Gorlangton, Mike Marvin and Don Marovich of the Kingston Trio will be performing Dec. 20 at the Maui Arts & Cultural Center.

A bunker at Sandbag Castle is shown after a direct mortar hit from a 500-pound bomb in this photo taken in January 1953 during the Korean War.