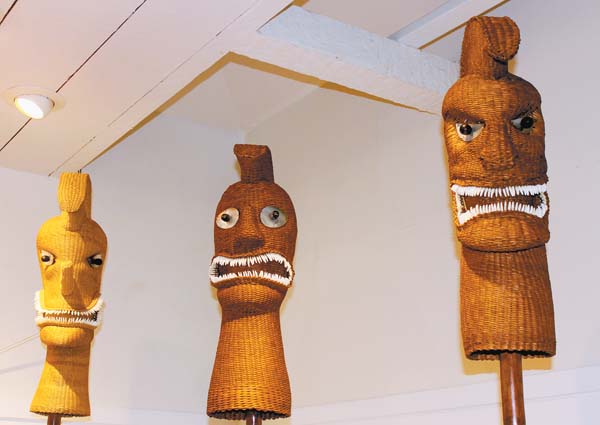 WAILUKU — A pair of Native Hawaiian practitioners hope to “revive the lost art of weaving” by teaching a cohort of nine haumana (students) on Maui and sharing a piece of Hawaiian history.

Under the instruction of kumu Lloyd Harold Kumula’au Sing Jr. and wife May Haunani Balino-Sing, the students learn about ancestral artistry and connecting with their kupuna for knowledge during a yearlong weaving program “Na Akua Akea, The Vast and Numerous Deities.”

The finished pieces of Na Akua Akea are currently on display at Hale Ho’ike’ike at the Bailey House in Wailuku since the exhibit’s opening Aug. 17.

The program includes creating ‘ie’ie style basketry and recreating representations of the ki’i akua hulu manu, or Hawaiian ancestral deities, as well as fish traps, fans and baskets. “This is the first time in modern times that you have this many ki’i here produced by the people of Maui,” Kumula’au said.

Students selected for the cohort have completed a prerequisite of beginning basketry, the kumus said. During each month of the program, the students were expected to complete a certain amount of weaving until the final product was ready. 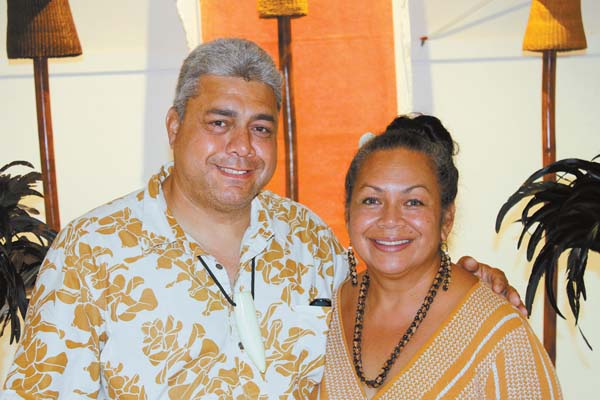 Program mentors Lloyd Harold Kumula‘au Sing Jr. and May Haunani Balino-Sing smile Friday afternoon while surrounded by their students who created and are displaying weaving art pieces at the Bailey House in Wailuku.

“What we’re trying to do is really elevate them and to push them to teach the greater community so that we can bring back the art, and revive it at a faster rate,” kumu Kumula’au said Friday.”

“Through the weaving, they learn the traditional ways as best as we know how to teach them, and with the knowledge that we have, but we also encourage them to evolve on that and to create things that they feel they want to create,” Haunani said.

Kumula’au started weaving in the ’90s under the mentorship of Raymond Nakama. After Nakama’s passing in 2014, Kumula’au and Haunani carried on the inspiration and mastery of ‘ie’ie weaving.

They have taught weaving in their hometown on Oahu, on Hawaii island and Kauai, but Maui “seemed to be the place where the people really have the hunger to want to learn.” 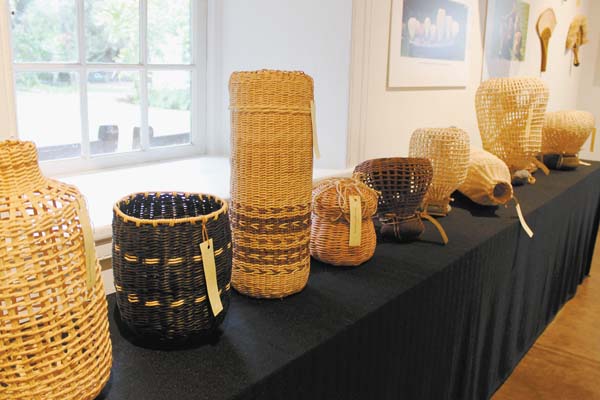 Hina‘i is a woven basket or container made of rootlets, pandanus, coconut husk or other material, and was used to catch small fish, shrimp and eel. Hina‘i hinalea is a more loosely woven basket that was placed in tide pools or along reefs to also catch fish in the ocean or streams.

“That’s why we chose here,” Haunani said. “We wanted to come back and teach, and we have the long-term goal of settling here.”

While the pair were already involved with workshops and teaching independent basketry classes, they pitched the idea of starting a yearlong cohort under a mentoring grant from the Hawaii State Foundation of Culture and Arts.

“Not too many people are aware of the ‘ie’ie weaving, and what we’re trying to do is pioneer that back and get people in the community doing it and eventually get our students to be teaching others so that they can reach further in the community,” Haunani said. “The grant was supportive of our vision.”

Now with the help of the state and local communities, Kumula’au and Haunani have been able to share and preserve a lost art.

The ki’i akua hulu manu are powerful feather ancestral images that are unique and meaningful to each artist, but traditionally, ki’i were used during ceremonies or wars as a reflection of courage and strength.

“We’re in that kind of time now where there’s a lot of things going on in the movement, and I’m not just talking about the Mauna, but the movements with us Hawaiians today,” Kumula’au said. “These images are really intended to uplift our people because that’s what they were traditionally used for, to uplift the chief, his people, and to carry these images into battle and bring home victories.”

The next step in the project will be learning the technique of traditional feather-work, which is historically woven into the deity’s helmet, Kumula’au added.

“These are spiritual and religious images. That’s why some of these are really personal to our students, especially the ones who integrated their hair into it,” he said. “It’s become a very personal piece, and it has a very special place for them in their home.”

Kumula’au added that the artwork itself took about eight rigorous months to complete, but part of the process also includes harvesting different types of vines and roots, which were collected over the summer using respectful and environmentally friendly practices.

Along with the ki’i, the students also made hina’i, or woven basket, which were used for trapping fish, shrimp, and eel along streams or tidepools.

However, the pieces are more than just art and used for display.

After a week of exhibition, one student took his ki’i to Mauna Kea while protesting against the construction of the Thirty Meter Telescope.

“This is a very special and unique exhibition because normally you have your exhibition sit for a period of time before you take it down, but this one is sort of an active one because our practitioners are more involved in the community,” Haunani said. “He took it to the Mauna for a few days and then brought it straight back. We’re open to that because we want to encourage and continue what we used to do before, in today’s time.”

As part of the “active” exhibition, the pieces will travel this spring to be on display at the Kaanapali Beach Hotel as well as at the Ritz-Carlton in Kapalua during the Celebration of the Arts Festival. Additionally, the kumus of the cohort hope to add the Merrie Monarch festival to the schedule, they said.

In May 2020, Na Akua Akea will be showcased at the Festival of Pacific Arts and Culture on Oahu, which only happens once every four years in a different Pacific nation.

“It’s a great opportunity to bring awareness to the art, and we’ve just been so blessed with our students that we have in the cohort,” Haunani said.

** This story contains a correction from the original published Monday, Sept. 16, 2019.

Program mentors Lloyd Harold Kumula‘au Sing Jr. and May Haunani Balino-Sing smile Friday afternoon while surrounded by their students who created and are displaying weaving art pieces at the Bailey House in Wailuku.

Hina‘i is a woven basket or container made of rootlets, pandanus, coconut husk or other material, and was used to catch small fish, shrimp and eel. Hina‘i hinalea is a more loosely woven basket that was placed in tide pools or along reefs to also catch fish in the ocean or streams.

Rainbow Warriors quarterback Cole McDonald takes a snap during the first half Saturday.

Na Alii’s Nicolas Strand intercepts a pass in front of the Warriors’ C.J. Hamasaki in the first quarter.

Warriors quarterback Tiliti Adams runs with the ball in the first quarter.

Washington’s Richard Newton reaches with the ball to score a touchdown as he’s tackled by Hawaii’s Paul Scott on Saturday. AP photos