Expert: Hawaii could lose ‘localness’ if housing not fixed 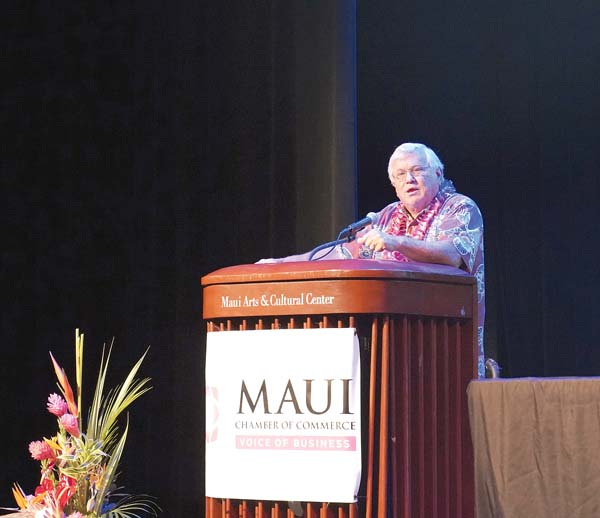 Maui Nui Attainable Housing Forum keynote speaker Peter Savio, who has four decades of experience in Hawaii real estate, discussed different strategies to tackling the affordable housing crisis, which would remove the state’s “localness” if not fixed in the near future, he said during the forum Wednesday in Kahului. Forum organizers said about 100 people attended the first day of the forum on Tuesday at the Maui Arts & Cultural Center and more than 100 attended the second day on Wednesday. The Maui News / KEHAULANI CERIZO photo

“In the next year, we need to change what we’re doing,” he said during a housing forum Wednesday. “If we don’t change, forget local. They’re all gonna be, ‘I live in Los Angeles, I live in Nevada, I live in Washington state.’ Everyone’s going to leave and the only person who can stay is the person who owns real estate.”

Savio, born and raised in Hawaii, was the keynote speaker at the two-day Maui Nui Attainable Housing Forum at the Maui Arts & Cultural Center that featured panels with local housing, developer and government speakers. Presented by the County of Maui and Maui Chamber of Commerce, the event drew hundreds to the MACC over two days.

As president and chief executive officer of The Savio Group, Savio has more than 40 years of real estate development and sales in Hawaii. He traced the state’s housing crisis back over decades and said old strategies aren’t working.

“People in our state believe that housing is expensive. . . . They believe the government has to do something about it,” Savio said. “The reality is, they’re wrong. We have to do something about it and government has to help us — but you cannot expect government to lead. The public, the people, the developers, the buyers, those of you who are interested in your community, have to speak up and basically say, ‘Hey, guys, we’ve been doing this for 60 years, maybe it’s not working, and shouldn’t we try something else?’ “

Over his career, Savio said, he’s created about 5,000 affordable housing units and has given away $300 million to $400 million dollars of profit to buyers in the form of below-market pricing.

When it comes to real estate, Savio said, government is cumbersome, restrictive and unrealistic.

“They should not be involved with housing,” he said. “They should provide assistance and funding, but they should stand aside and let developers do their things.”

In the 1950s, the Hawaii real estate market was stable and prices were reasonable, Savio said. By the 1960s, though, the state started seeing high prices and no one was asking why.

“What happened in the 1960s? Jets, tourists, Mainland buyers, military. Here, you have a slow, stable market, then 500, 600 people come to Hawaii and buy real estate, what does it do? It skews the market,” he said.

Modern times are proving what Savio said he’s always feared — that Hawaii has turned from a local real estate market into an international one.

Savio pointed to an October study where 58 percent of Hawaii residents pay more than 30 percent of their income on rent; he said you cannot have a local real estate market where that occurs.

Strategies he offered included the following:

• The county and state should not build affordable rental units; they should build “affordable rent to build equity,” allowing properties to create value for people. He said rental housing is “evil” and a “stealer of wealth,” since renters give away family wealth to a landlord, helping the landlord get wealthier. “Wealth creation is about ownership and retaining the value for the local community.”

• Adopt the Singapore program. “It’s not building 40-, 50-, 80-story buildings,” he said. Instead, the country prioritized ownership for their people. “They don’t believe in rental projects, they believe in ownership. They did nothing but work on creating ownership. Today it’s one of the most wealthy, educated countries, and they are 95 percent owner occupied.”

• Create a financing program, government-sponsored, for local developers who will do 100 percent affordable housing but restrict their profit to 5 to 10 percent. “Doing that reduces the cost of housing off the bat, by 20 percent,” he said, adding that risk is then taken out of the equation. If the county or state says it’s too expensive, “you don’t have to insure everything, just the top 10 or 20 percent. If the developer fails, take the project and finish it.”

• The county can separate market housing from affordable housing. “What we need is developers who care about the people. If they want to build their multimillion-dollar homes for the Chinese and the Japanese, let ’em, just don’t give them concessions, don’t subsidize them, take that money and subsidize developers doing 100 percent affordable.”

• If a local developer is going for an affordable project, allow the infrastructure to be added later if possible. He discussed an affordable Maui project he considered in the past, but the county would have added $100,000 to the price because it wanted him to build a bridge, stoplight and other infrastructure. “Maui lost 500 units at $250,000 each that could’ve been sold at the local market, because the county wanted concessions and it was politically unwise to not change it. They encouraged me to go someplace else. They just killed the deal.”

• Local developers should be building Hawaiian Homes housing. “You know why? Number one: Mainland haoles can’t buy them. No one can buy but Hawaiians. They’re local. So anything you build stays local. The other good thing, if you build 30,000 Hawaiian Homes, you actually create 40,000, maybe 50,000 units, they move out of their rental or the house they’re in and you are creating something on the other side. We’re creating more housing.”

The forum, with its first day of free attendance and its second day at a $60 fee, was created to help lead discussion and solutions on housing opportunities.

For select recap of the forum, visit the County of Maui Facebook page.