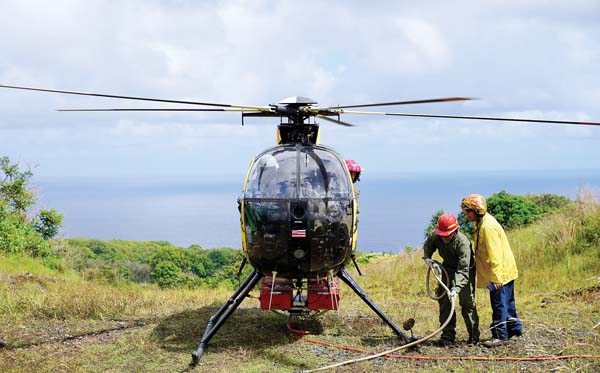 A Windward Aviation helicopter had gel bait refilled while it was running to save money and time in a joint effort Tuesday to treat an infestation of ants on 150 acres in Nahiku from the air for the first time. The Maui News / KEHAULANI CERIZO photos

NAHIKU — A roughly 150-acre section of Nahiku jungle seems even more enormous when compared to its miniature foe.

Little fire ants, called one of the worst invasive species in the world and smaller than the average friendly ant, have millions of queens and billions of workers living in this East Maui area. Thick vegetation and dangerous terrain make the tiny terrors difficult to combat despite years of treatment administered on foot.

This week, though, humans may have helped Nahiku’s native ecosystem gain the upper hand in the struggle to combat the invasive insect.

“This approach isn’t being used anywhere in the state,” said Lissa Fox Strohecker, MISC public relations and education specialist. “It’s the first time we know of that anyone is using gel bait from a helicopter anywhere in the world.” 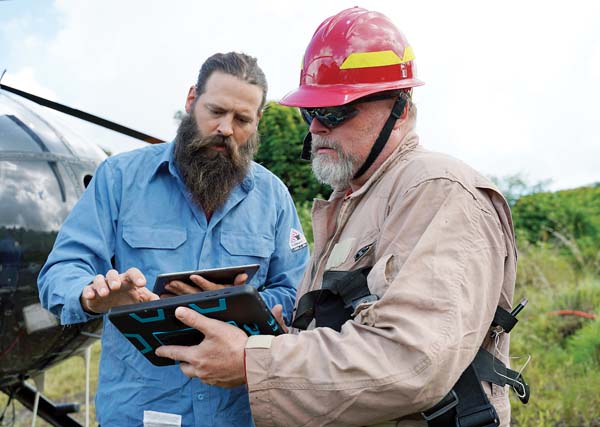 Crews from Maui and Hawaii island have been working for years to obtain environmental permitting, surveys of the area and funding. It took about a year to create a special device to spray the bait from the air. Using a proven recipe by the Ant Lab that combines food-grade ingredients and a growth regulator that acts as a birth control, the new tool could mean big things in the larger fight against the small but destructive insect.

“This will help the entire state,” Strohecker said. “Once we have this technology (established), we can use it elsewhere.”

MISC manager Adam Radford said places outside the state may benefit, too.

“Tahiti is super interested in this,” he said. “They have been doing stuff with drones and UAV (unmanned aerial vehicle). It’s pretty exciting.”

After early-morning rain cleared, the first Windward Aviation flight took off and started spraying. Cheers erupted in the middle of a forest clearing accessible only by four-wheel drive. 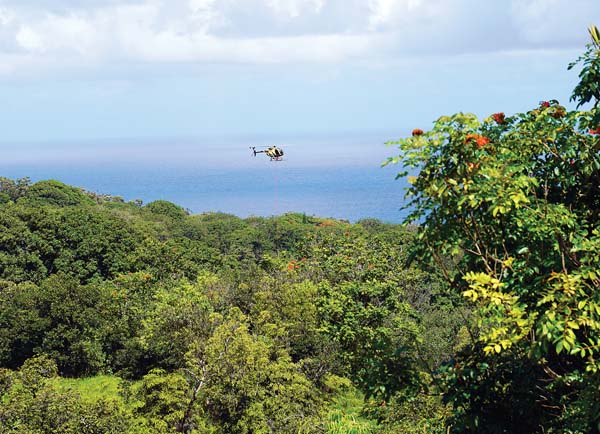 “This has been a long time coming,” said Michelle Montgomery, Ant Lab research specialist. “We’ve been waiting for this day for years.”

Not just another ant

The little fire ant, also known as the electric ant because of the burning that comes from a sting, has been been called one of the 100 worst invasive species globally by the International Union for Conservation of Nature Invasive Species Specialist Group.

Stings can permanently blind cats and dogs and can cause irritation for humans. Also, they can create huge colonies (80 million ants per acre) and even fall from trees, creating “ant rain.”

Native to South America, the ants have invaded tropical and subtropical regions around the world and have been found in colder regions, like Europe and British Columbia, Canada, according to the Big Island Invasive Species Committee. 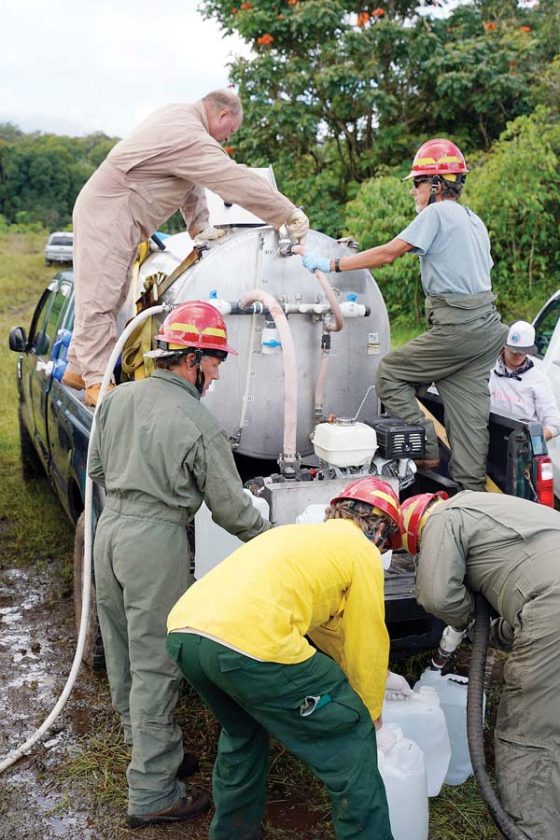 In a meticulously timed effort by Maui Invasive Species Committee and Hawaii Ant Lab, crews Tuesday prepare ingredients, fill MISC tanks atop trucks, feed it to lines and refill tanks on the helicopter.

Out-competing other insects, the pests already have altered lifestyles on Hawaii island, with parents avoiding taking their children hiking, fishing and hunting because of the ants.

Every MISC and HAL crew member queried Tuesday said they had experienced firsthand the pain of a little fire ant sting. Some said the pain can’t be compared to other biting or stinging creatures in Hawaii, like centipedes or Portuguese man-of-war.

“It’s a slow burn, and you don’t notice it at first,” Montgomery said, who added she “lost count” of how many stings she’s experienced. “It turns into a hot needle for 15 to 20 minutes.”

The sting site is noticeable for a while. For some people, like Montgomery, stings turn into welts. Others get more of a “super itchy” rash. 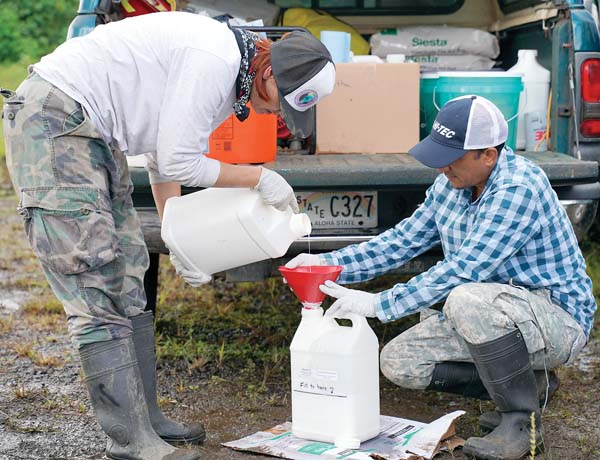 Hawaii Ant Lab specialists Michelle Montgomery (left) and Ersel Hensley pour ingredients for low-toxicity gel bait developed by the Hilo-based lab. The final product looks like pancake batter but must be runny enough to filter through an aerial spraying device.

Experts said the ants often sting on the collar, pants belt line and bra line. Ants don’t have a limit on the number of stings they can inflict and are often on the move, likely stinging elsewhere before the human or the pet notices pain.

Humans and pets aside, Monte Tudor-Long, MISC little fire ant crew member, said the ant is a “game changer” for the environment and native ecosystems.

“It destroys everything in its path,” he said, discussing negative impacts to sea turtle and seabird nests. “No other ants can coexist with it. 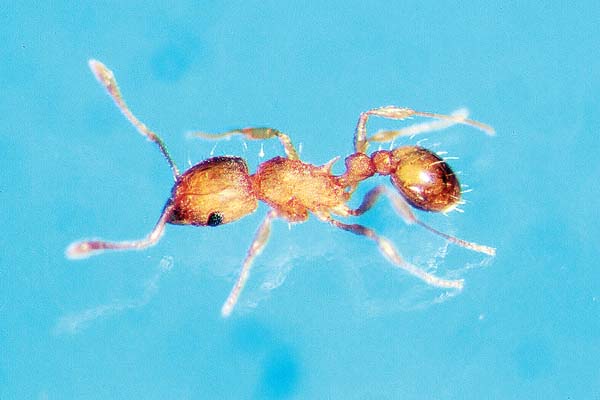 With the helicopter treatment, experts are hoping to take some of the pain out of fighting the ants.

Control methods come in two varieties, according to MISC. One is a slow-acting toxic bait that workers take to the nest and feed to the queen and growing larvae. They are killed over several days.

Another is an insect growth regulator or birth control (called Tango, with an active ingredient of (S)-Methoprene) that doesn’t kill the ant outright but rather stops the queen from producing viable offspring.

Bait, a gel substance for trees and granular mixture for the ground, delivers the treatments by attracting the ants. Developed by the Ant Lab and used effectively for nearly a decade, Montgomery said the gel bait ingredients are food-grade material — water, vegetable oil, peanut butter and/or beef liver powder and Xanthan gum. The active material comprises 5 percent to 0.1 percent of the solution.

“One misconception that people have is that they ask, ‘Is it going to affect my reproduction?’ ” Montgomery said. “I say nope, because it’s an insect growth regulator. Unless you’re an insect, then it won’t affect reproduction.”

Strohecker said ants like the mix of beef liver, oil and water, but it’s not attractive to “beneficial pollinators” like bees and butterflies.

“The control method we’re using is extremely low-toxicity and is safe to use around food crops and animals,” she said.

A meticulously timed effort by the crew Tuesday prepared ingredients, filled MISC tanks atop trucks, fed it to lines and refilled helicopter canisters while the aircraft was running to save money and time.

MISC GIS operations specialist Brooke Mahnken, who was aboard the helicopter with pilot Pete Vorhes, directed the path of coverage. Digital mapping showed lines that matched the 22-meter (72-foot) wide swath of the product.

Mahnken’s mapping has been pivotal for tracking ants and treatment sites on Maui and beyond, Strohecker said.

“We were pretty encouraged by that, and we think it will do the same here,” he said.

This aerial treatment will be done every six to eight weeks for a year. After about six months, results can be seen, MISC said. With all Hawaii sites, rigorous treatment may last years, followed by monitoring phases.

Detected in 2014, Nahiku’s infestation represents the largest single-site infestation outside of Hawaii island.

“At first, we had no idea how we were going to address it,” Strohecker said, noting the complexity of jungle terrain. “It’s just like, OK, we don’t have the technology yet, we don’t the techniques yet to address 150 acres of little fire ants.”

Up until now, the treatments have been applied using a 4-gallon backpack and sprayer that weighs about 50 pounds, said Joe Brower, MISC little fire ant specialist working in East Maui.

“In a jungle like this, I’m crawling, climbing, taking it off, going under trees that are lying down — it’s gnarly,” he said, adding that stings are part of the job. “This stuff is not very glamorous.”

For years, MISC has been focusing on keeping the insects from area roadways and perimeters of homes.

“We were holding it basically until we could address it,” Strohecker said. “We were preventing any movement.”

Resident support has been important in the Nahiku effort to fight the ants.

“The community here has basically been saying, ‘Let’s go, let’s get it done now,’ ” Radford said. “That’s always really important just to have buy-in from everybody.”

Strohecker said government and various groups have been collaborating on the effort.

“We had funding, the County Council has been really proactive,” she said. “We also had the support of Hawaii Ant Lab. It was sort of the right combination.”

There is one established location on Kauai, but treatment has brought the ants to undetectable amounts, according to statewide outreach website Stop the Ant. There are about four active sites on Oahu, with a handful of others in monitoring phases.

Hawaii island, which was the first island in the state to identify little fire ants back in 1999, has the most widespread infestation in the state. The pests have been found in all districts of the Big Island, Stop the Ant said.

“It takes a lot of work, but it can be done,” he said. “We shouldn’t be afraid of fighting a large infestation. It’s not time to give up.”

“Up to today, it’s been about control,” Brower added. “But I think now it’s about eradication.”

“That’s when it’s overwhelming,” she said. “If they start with prevention and taking it seriously from the start, it makes for less headache and less money in the future. Prevention is the cheapest and easiest thing to do.”

The Ant Lab and MISC said that they provide many resources for the public and encouraged people to contact them.

“I want people to know that they can ask questions, they can call us and send us pictures, whatever,” Tudor-Long said. “We have people who can answer questions. The more samples we get from the public, the better off we all are. We map it out to know which species live where.

“We want to know all of our ants.”

Awareness is a big part of prevention, Montgomery said.

Area residents who have encountered stinging ants — particularly those who have been stung on their neck and upper body after working with or under vegetation — are urged to report suspect ants to:

Information on little fire ants is available on these websites:

The Travaasa Hana is the largest employer in Hana with a staff of 185. The new owners, Mani Brothers, said there will be no staff cuts and, in fact, they may increase personnel. This photo was taken in 2016. AL ARGUETA photo

Maui County Council Member Tamara Paltin, who holds the West Maui residency seat, speaks against the Makila Farms project, a proposed mix of market-rate and affordable homes in Lahaina, during the council’s meeting on Friday. The council voted 5-4 on Friday to approve the project. The Maui News / COLLEEN UECHI photos

A Windward Aviation helicopter had gel bait refilled while it was running to save money and time in a joint effort Tuesday to treat an infestation of ants on 150 acres in Nahiku from the air for the first time. The Maui News / KEHAULANI CERIZO photos

Hawaii Ant Lab specialists Michelle Montgomery (left) and Ersel Hensley pour ingredients for low-toxicity gel bait developed by the Hilo-based lab. The final product looks like pancake batter but must be runny enough to filter through an aerial spraying device.

In a meticulously timed effort by Maui Invasive Species Committee and Hawaii Ant Lab, crews Tuesday prepare ingredients, fill MISC tanks atop trucks, feed it to lines and refill tanks on the helicopter.