Prospects good for Doobie Brothers to get into rock hall 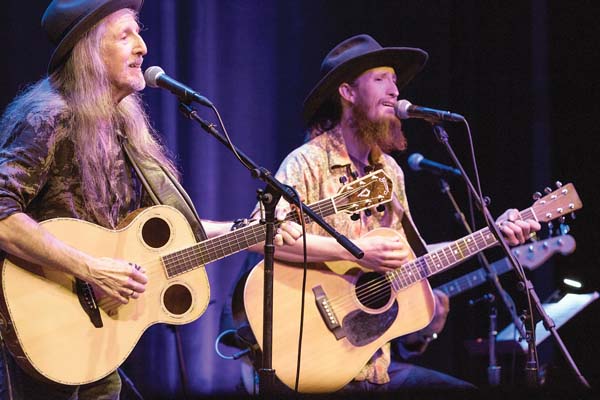 Long-time Maui resident Pat Simmons (left) can occasionally be seen playing music with his son, Pat Simmons Jr. Besides the Doobies, Simmons has been working with his son on a new record. “I’ve recorded a song with him, ‘I Want to Make My Own Decisions,’ and we’ll probably do a video,” said Simmons. “We cut the track here with Chris Thomas and Hutch (Bonnie Raitt bassist James Hutchinson). I laid down my guitar and Dave Mason played on the track . . .”

It’s been a mystery for many years why legendary rockers the Doobie Brothers, with three Grammy wins and a number of major hits, had never been nominated for the prestigious Rock and Roll Hall of Fame, while lesser artists like The Moonglows, Lloyd Price, Donna Summer, and Joan Jett have all been inducted.

As Billboard magazine recently noted the Doobies non-selection is, “long considered one of the Rock Hall’s great slights.”

Eligible for induction for more than 20 years, the Doobies finally have a shot at the Rock Hall, having received their first-ever nomination on Oct. 15.

Back at his Haiku home on a brief break from a Doobies tour, founding lead guitarist/vocalist Pat Simmons was pleased to hear the news.

“We’re pretty thrilled to be on the radar,” he says. “For Tommy (Johnston), it’s particularly meaningful because he wasn’t there when we got Grammy Awards. He deserves a lot of credit for the songs he’s written and his performances on records, and his general dedication to music. I’m really happy particularly for him to see this.”

“I’m happy to see the other guys get recognition, Jeff Baxter, Tiran Porter, and John Hartman are all still around,” Simmons continues. “We’re looking at the early founding band and a portion of the musicians who were there when Mike (McDonald) joined the band. John McFee joined later and he’s been involved for the last 30 years.

“Speaking for myself, I don’t live my life looking for accolades or awards. My reward is in the music and having the opportunity to do what I’ve done with the band and outside the band. Having fun doing what I’m doing is a huge reward for me.”

A long-time Maui resident, Simmons, along with McDonald, is a regular performer at Shep Gordan’s annual New Year’s Eve charity bash in Wailea (both will play this year on Dec. 31), and can occasionally be seen playing with his son, Pat Simmons Jr.

Other Roll Hall nominations for 2020 include the Dave Mathews Band, Pat Benatar, Soundgarden, Judas Priest, Kraftwerk, Depeche Mode and Nine Inch Nails. The top Rock Hall vote-getters will be announced in January and inducted on May 2nd, 2020.

Prospects look good for the Doobies as they are currently placing third in fan voting, behind the Mathews Band and Benatar.

Until Dec. 9, anyone can vote for their favorite artist. The top five acts will comprise a “fan’s ballot” that will count as one of the ballots that will determine the class of 2020.

“Fans can vote daily,” Simmons explains. “You can place a vote every day. The public votes influence somewhat how the folks on the committee decide who is going to make it. But in a certain sense, it’s who they feel deserves it and what their particular tastes are in music. Odd people have made it into the Hall, more personalities.”

Since forming in 1970, the Doobies have sold more 48 million records worldwide (including three multi-platinum, seven platinum, and 14 gold albums). Their “Best of the Doobies” album has sold more than 12 million copies. The band’s hits include “Listen to the Music,” “Black Water,” “Long Train Runnin’,” “China Grove,” and “Takin’ it to the Streets,” along with “What a Fool Believes” and “Minute By Minute” composed by McDonald.

“To this day, I think of myself as a Doobie Brother, all these years later,” McDonald, who will tour with the Doobies in 2020, told NPR.

Over the years, the Hall of Fame’s nomination process has faced criticism as it has been partially controlled by an elite group of industry titans, managers, journalists and a few musicians. “Why any particular act is chosen in any particular year is a mystery to performers as well as outsiders,” The New York Times reported.

“They have a committee meeting and they talk about who might be nominated,” says Simmons. “Then they take a round-table vote.”

Just because a band is nominated, it doesn’t mean they will be inducted. “We may not get in until my later, unfortunate demise,” Simmons jokes. “I figured I’d be passed on before I’d ever be considered.”

The nomination news arrived as the Doobies were ready to hit the road again with special shows that included performances of their classic albums “Toulouse Street” and “The Captain and Me.”

In February, they head to Las Vegas for an 8-show residency at the Venetian. “We’ve had some extended stays there but never this many shows,” he notes. “Other bands have paved the way for us.”

With the 50th anniversary of the band’s formation coming in 2020, they will release a new five-song EP, produced by John Shanks (Van Halen, Jon Bon Jovi). “It’s totally different from anything we’ve ever done before,” Johnston told Ultimate Classic Rock.

“And we have a book coming out that a friend wrote, just really Tommy and I telling stories of the past,” Simmons says.

Besides the Doobies, Simmons has been working with his son on a new record. “I’ve recorded a song with him, ‘I Want to Make My Own Decisions,’ and we’ll probably do a video. We cut the track here with Chris Thomas and Hutch (Bonnie Raitt bassist James Hutchinson). I laid down my guitar and Dave Mason played on the track. We have a new percussionist Marc Quinones, who played with the Allman Brothers, and he played on it. Bill Payne (of Little Feat fame) played keyboards and John McFee played cello. It sounds pretty good. We’ve got a cool arrangement.

“Pat (Simmons Jr) did a video for his song ‘Rust’ with a Maui video crew and I think it would make a cool video, so we’re trying to get something together. He’s a minimalist and I’m a maximalist. I like to make things bigger and deeper and more convoluted. This song deserved it.”

It’s been years since the Doobies played Maui. Does he think they will return?

“Eventually, we’ll probably do a benefit. If someone books us for a corporate deal, I’ll book us for a fundraiser.”

* Rock Hall voting for fan’s favorite band is available at www.rockhall.com. Voting is capped at one ballot per day. Daily voting continues through Jan. 10, 2020. Pat Simmons Jr. performs at Toohey’s Butchery & Bistro in Haiku tonight at 7. He also plays Cafe Des Amis in Paia on Friday at 7 p.m.

Maui Arts and Cultural Center will celebrate its 25th anniversary with a major free concert on Sunday open to all ages. Beginning at 4 p.m. a marching band will lead the audience from the entrance gates into the A&B Amphitheater.

Fun activities include face painting and balloons, and the evening will feature free birthday cake and a fireworks finale.

The fest will open on Dec. 5 at Fleetwood’s on Front with a show featuring musician/song writers Lucis Silvas, Bob DiPiero, Tim Nichols, Kassi Ashton, and Kevin Griffin. It will continue on Dec. 6 with a “How I Wrote That Song” show at the Fairmont Kea Lani. More information is available at www.mauisongwritersfestival.com.