Culture can’t be contained to classroom 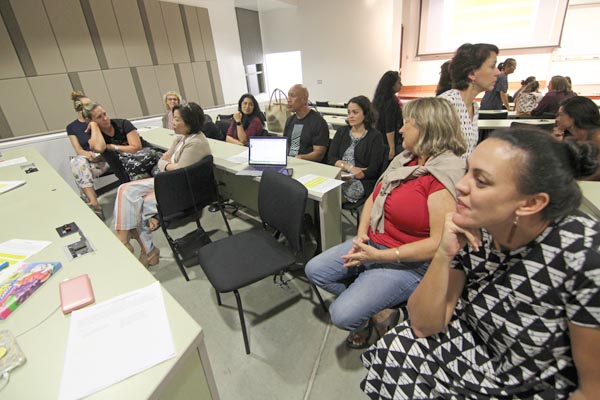 Hawaiian immersion school teachers discuss some of their concerns during a state Board of Education meeting on Tuesday night at the University of Hawaii Maui College. Teachers focused on three main topics: curriculum, staff and leadership. At least 50 people attended the meeting. The Maui News / COLLEEN UECHI photo

KAHULUI — When Kalamaku Freitas teaches his Hawaiian immersion students about a certain type of traditional fishing, he wants them to learn it for themselves — to meet the people who keep the practice alive, to understand why they use certain bait or techniques.

But he’s limited in what he can do and how often he can take his students out.

“The only way for them to truly gain that appreciation and truly strengthen their cultural identity is really practicing it themselves and really being able to just experience it and internalize it,” said Freitas, who teaches grades 6-8 at Ke Kula Kaiapuni ‘o Kalama. “Right now, I think in this Western box, we aren’t able to achieve that.”

Freitas is among the many kumu kaiapuni, Hawaiian immersion school teachers, who struggle to fit the entirety of a language, culture, history and indigenous knowledge within the confines of a Western education system.

Like many English-language teachers, their resources are limited, and they spend countless hours of their own time putting together their own lessons. But there’s even less Hawaiian-language material available, and some of the traditional methods that kumu use to teach — hula, mele, oli — aren’t seen as actual instructional time. 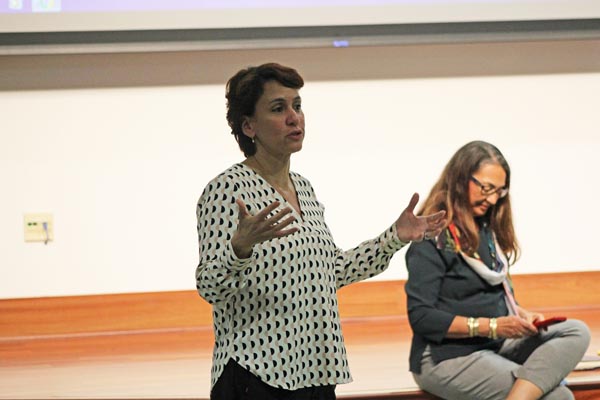 Department of Education Superintendent Christina Kishimoto addresses teachers during a Board of Education meeting at UH-Maui College on Tuesday night. The Maui News / COLLEEN UECHI photo

At a state Board of Education meeting on Tuesday night, Maui’s kumu from kindergarten to college level shared some of their biggest struggles.

Curriculum has long been a problem, said Kaleikoa Kaeo, an assistant professor in Hawaiian studies at the University of Hawaii Maui College. Programs for languages like Spanish and French have “a clear scaffolding of the language” that outlines what literature and vocabulary students should be learning at certain ages. Hawaiian language programs need a similar structure, said Kaeo, adding that he’s seen “real young kids learning some real obscure words.”

“The biggest change . . . is going to come through the curriculum,” Kaeo said. “That’s what I really think. It’s always been an issue. But to create that kind of curriculum, you have to include actual teachers. . . . Teachers haven’t had the opportunity to work together to actually create the stuff we need.”

Punohu Ah-Sau, who teaches kindergarten at Ke Kula Kaiapuni ‘o Pa’ia, said that the prep time allotted to teachers is not enough. Often, they end up translating materials on their own time after work. Ah-Sau added that “there used to be more project-based learning.” Now, students are learning the language, but nobody is teaching them to throw net or pound kalo, for example.

For Freitas, that’s one of the greatest challenges. A culture so deeply rooted in the ‘aina is hard to convey through textbooks and exams. He wants to take the kids to places where they can envision ancient battles and dip their hands in traditional practices. But being stuck in a classroom for most of the day and having to share funding for a limited amount of field trips makes it tough.

“It’s like a waste of all these cultural spaces,” Freitas said.

When asked what resources the Department of Education provides, Freitas replied, “Honestly, they provide the classroom.” Not only is there a lack of material on Hawaiian language arts, there’s also not enough material in Hawaiian language on subjects ranging from history to science.

“So for us, it’s just basically double the work,” Freitas said. “We have to read the textbook, then take whatever we want out of it, translate it, and then still try to make that connection to our people and our culture. . . . “That’s a difficult thing.”

And, even as they rely on their own ways of teaching, some of those methods are not actually recognized as instructional time.

Kaleialoha Kaniaupio-Crozier, for example, begins her 3rd-grade class at Paia with oli, mele and hula to prepare her students “to enter into this place of learning and to acknowledge our ‘aina as well.” It teaches the students language and culture as well as subtle things like where the sun rises and sets. But, it doesn’t count.

Kumu kaiapuni are constantly trying to pull their students back into the world of ‘Olelo Hawai’i, she added. When the students leave school and go to the store, watch an evening TV program or talk to their parents, the language of choice is often English.

“There’s this type of ‘olelo switch that shouldn’t exist,” Kaniaupio-Crozier said. “You should literally just have it and leave it on for the rest of your life. But that’s not the case. And so for the most part what happens is that when these keiki come to school, they leave the switch on, but once school ends, 2 o’clock bell rings, boom, off.”

It’s why many teachers during the BOE meeting wanted to see a K-12 immersion campus on Maui, which would streamline the things they’re teaching and create a controlled language-learning environment that would help keep the students in an ‘Olelo Hawai’i mindset.

Both Freitas and Kaniaupio-Crozier are graduates of K-12 immersion programs — he of Ke Kula ‘o ‘Ehunuikaimalino, the only K-12 program on Hawaii island, and she of Ke Kula Kaiapuni ‘o Anuenue, the only K-12 program on Oahu. They’re both young teachers who know they benefit from a system built on the blood, sweat and tears of their own kumu, whom Kaniaupio-Crozier called her “biggest heroes.”

In fact, one of her former teachers is now the director of the Office of Hawaiian Education — Dawn Kau’i Sang, who agreed Tuesday night that “there has to be some changes to what is happening in the schools.”

“Teachers have to feel safe that it’s OK to try something and not have sort of this fear of retribution for not doing the Western stuff,” Sang said. “I’m not saying that there isn’t value for those things, because there is. I think the ‘how’ to get there has to be revisited. The space for teachers to do that work and to be able to revisit how to deliver quality education in the context of Hawaiian language and culture is important.”

She added that there are “already pockets” of teachers innovating, “and we need to shine a light on those best practices.”

“It’s trying to change the mindsets of people so that they recognize that actually some of those ‘hows’ that come from traditional practices has always been a good ‘how’ for students,” Sang said.

Hawaiian immersion school teachers discuss some of their concerns during a state Board of Education meeting on Tuesday night at the University of Hawaii Maui College. Teachers focused on three main topics: curriculum, staff and leadership. At least 50 people attended the meeting. The Maui News / COLLEEN UECHI photo

Department of Education Superintendent Christina Kishimoto addresses teachers during a Board of Education meeting at UH-Maui College on Tuesday night. The Maui News / COLLEEN UECHI photo

A humpback whale mother slaps her tail in waters off Launiupoko in January. The Maui News / MATTHEW THAYER photo