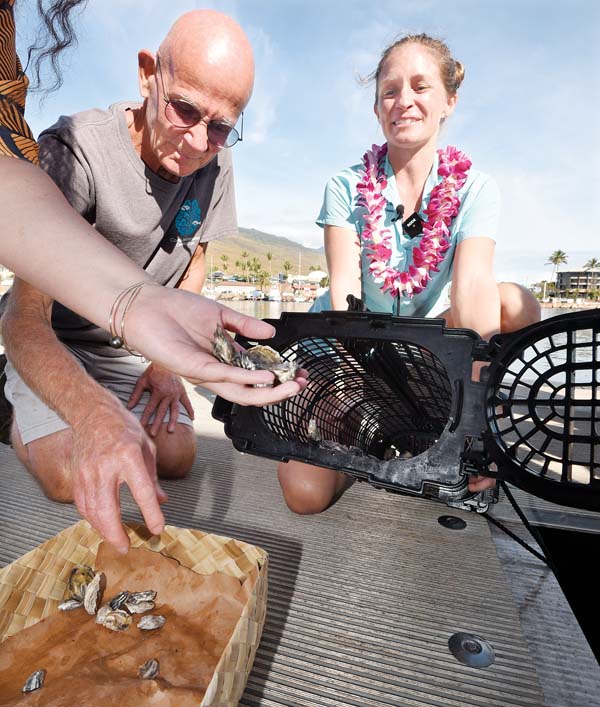 MAALAEA — A total of 518 caged Pacific oysters were dropped into Maalaea Bay on Friday morning to clean pollutants and harmful bacteria from the ocean in the Valley Isle’s first-ever oyster filtration project.

“It’s been a long process, a positive one,” said Amy Hodges, programs and operations manager of the Maui Nui Marine Resource Council. “We think this project is going to be successful based on the other ones that are on Oahu and the East Coast, so I think we’re looking at a bright future for the project here.

“I’m very excited to come and work with the oysters.”

About 15 people, all of whom played a role in the project, gathered for a blessing and to “celebrate an awesome day” before dropping the first batch of caged Pacific oysters into Maalaea Bay off the harbor’s old ferry building. A few more cages were dropped along the pier. 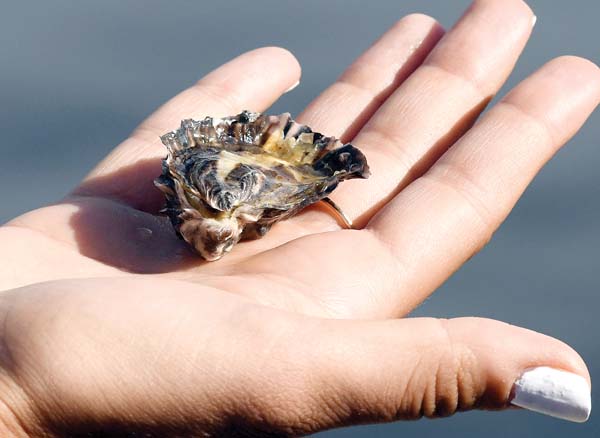 These Pacific oysters can remove sediment, bacteria, heavy metals, PCBs, oil, micro-plastics and runoff nutrients from the water through filter-feeding. They were grown at UH-Hilo. — The Maui News / MATTHEW THAYER photo

There were about 100 oysters per basket.

Hodges told the group that this pilot project has been two years in the making, including gathering permits and ensuring that Pacific oysters would be a beneficial way to remove pollutants and improve ocean water quality.

For part two of “Vision for Pohakea,” the council is working to prevent sediment runoff, debris and pollutants from entering Maalaea Bay from the 4,000-acre Pohakea Watershed area. Hodges said they are adding firebreaks, planting vegetation and reconfiguring unused agricultural roads.

According to the Pohakea Stormwater Management Plan, recent studies have demonstrated that increases in sediment discharges from watersheds associated with poor land-use practices can impact reefs over 62 miles from shore. 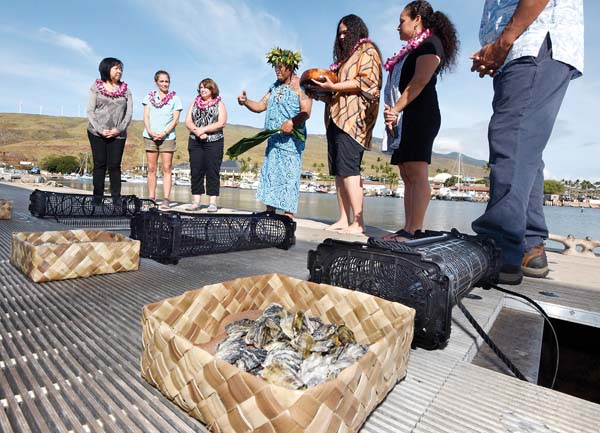 The entire project will run through 2021 and is a partnership with Waterkeepers Hawaiian Islands and the Pacific Aquaculture and Coastal Resources Center at the University of Hawaii-Hilo. Funding is provided by the National Fish and Wildlife Foundation, state Division of Boating and Ocean Recreation, Hawaii Tourism Authority’s Aloha Aina Program and the Maui County Office of Economic Development, Hodges said.

One Pacific oyster can filter up to 50 gallons per day, removing pollutants and digesting the types of bacteria that cause skin-borne illnesses, such as staph and MRSA.

During the first month, Hodges said that the crew will be checking the “extra hardy,” nonreproductive oysters almost everyday for measurements, die-offs, algae growth, crabs, worms or anything else that may hinder their filtration abilities. Eventually, monitoring will be every two weeks by council staff.

If the oysters thrive, another batch of baby oysters will be added to the multi-year project at Maalaea and hopefully inspire an expansion across Maui, Hodges added.

As an educational outreach, Hodges said the Maui Nui Marine Resource Council will be recruiting volunteers who will learn monitoring procedures and how to care for the oysters.

An electronic, ocean water monitoring probe is being used to collect baseline data on nutrients, turbidity and enterococcus levels in the bay by kayak every two weeks or during stormwater events.

Coming up, a permanent in-water sensor will be installed in the bay that can be submerged for six to 12 months to continuously monitor water quality and levels of chlorophyll a, “a parameter closely related to algae growth,” Hodges said.

Algal blooms are the result of excess nutrients, such as phosphorus and nitrogen, which in turn can suffocate coral reefs and other marine wildlife. Additionally, leaching from nearby cesspools may be contributing to the high levels of enterococcus, a bacteria, and algae nutrients observed within Maalaea Bay. Cesspools can leak contaminants into oceans, streams and groundwater, which can increase levels of chlorophyll a.

The inedible, noninvasive Pacific oysters were raised at the Pacific Aquaculture and Coastal Resources Center at UH-Hilo for a year, until they were mature enough to be shipped to Maui and survive in Maalaea waters.

“This project is important for a lot of reasons,” said Maria Haws, UH-Hilo director and associate professor of aquaculture. “For one, throughout the state of Hawaii, we have to address our water quality problems, and this is one way to do it. Just as people are saying, this is just a small piece of the puzzle, . . . we’re hoping it draws people’s attention to the larger things that can be done.”

Maui is the last major Hawaiian island to embrace oyster filtration, so “it’s kind of a big day for all of us who have been working on this for more than 10 years,” Haws added.

“Cleaner water allows for more sunlight penetration, which is important for corals and other animals,” said Rhiannon “Rae” Chandler-Iao, executive director of Oahu Waterkeepers, which also raises its oysters at the UH-Hilo facility.

Maui has two species of native oysters — pearl oysters and the native Hawaiian oysters. Native oysters are only about a couple inches in size, which are much smaller than the Pacific oysters used in the Pohakea pilot project.

For every one Pacific oyster, roughly four native ones would be needed to do the same job, Haws said. These non-native oysters are not considered invasive, though, and were first introduced to the Hawaiian Islands in the late 1920s.

When Haws brings the second batch of oysters next month, she hopes to include a mix of native species with the Pacific oysters “once we know they can survive.”

“We didn’t know how well they would do in the water, so that’s why we went with the bigger, hardier species,” Hodges said. “The ultimate goal is cleaning up these waters, making it as clear as possible for all our fish.”