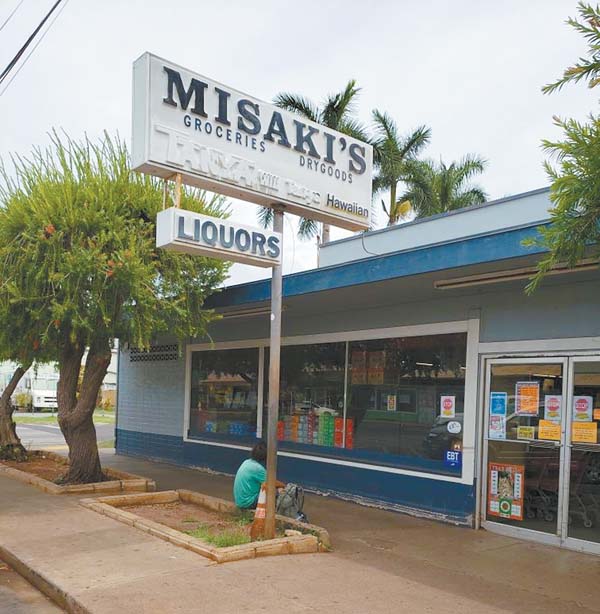 After Friendly Market employees tested positive for COVID-19, Misaki’s plans to shift to phone and pickup orders. As the other major grocery store in town, Misaki’s will likely shoulder the load with the closure of Friendly Market. KEVIN MISAKI photo

Confirmed cases of COVID-19 in two Friendly Market employees have spurred grocery stores on Molokai to switch to curbside pickup and trim their hours in hopes of reducing exposure.

The second case, which was reported late Saturday night in a Friendly Market employee, was the result of testing arranged for all workers by the market’s owners and Maui County Mayor Michael Victorino, Sen. J. Kalani English and Rep. Lynn DeCoite, according to a news release from the State Capitol.

“Unfortunately, this situation was a strong possibility after the first individual, who also is a store employee, tested positive,” Victorino said. “Rep. Lynn DeCoite, Senator J. Kalani English, and I have all been working with the local businesses to help sanitize their buildings and surrounding areas. I want the residents of Molokai to know that we will make sure that services and goods will continue to arrive to the island.”

The first case, confirmed Thursday, was an employee who had returned from Las Vegas on March 17 and went to work for two days after returning home. The person has been hospitalized at Queen’s Medical Center on Oahu.

Friendly Market will be closed until April 20, and all employees are in self-quarantine. 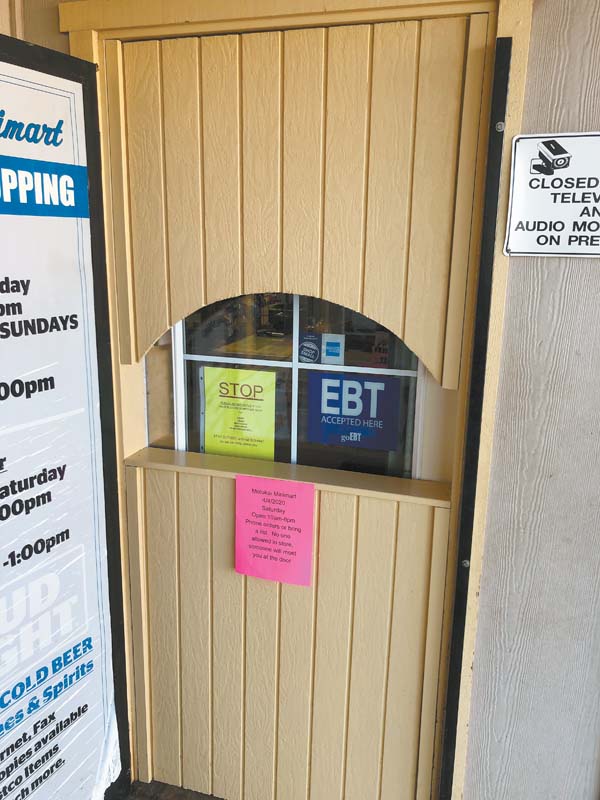 A wooden counter covers the entrance to Minimart in Kaunakakai town. The store, which offers essential goods, iced coffees and liquor, is only taking orders at the counter in the wake of two reported cases on island. DESERAE NAEOLE photo

The closure of one of the island’s main grocery stores will leave others to pick up the slack. As soon as the first case was reported, worried owners quickly made changes.

Minimart, which offers essential goods and liquor down the street from Friendly Market, is usually open till 11 p.m. However, starting Sunday, Minimart will only be open from 8 a.m. to 8 p.m. daily and will take orders through a counter at the door.

“I just feel like if you’re serious about this, you should grab your stuff and just be home after 8,” said Deserae Naeole, vice president of Minimart.

Naeole said she was “shaken up” after the first reported cases and said she didn’t feel people had been taking it seriously before it happened. Now, two of her workers don’t feel comfortable coming in. A cleaner came in Sunday and workers are trying to wear masks and social distance. They’re also asking customers to wear masks when stopping by.

Mana’e Goods & Grindz on the east end, which has essential goods and a lunch counter, is now only doing phone orders, said Kai Ward. Customers can call or text their order and are asked to wait in their cars until their groceries are brought to a table outside.

Ward said employees are much busier under the new system, rushing around to fill and deliver orders. She said they may have to close down when freight gets delivered Mondays and Thursdays just so they have time to stock up and sanitize everything.

“Last couple days it’s been a little busier than normal,” Ward said. “I think everybody’s afraid. Town is really busy and they’re kind of doing the same thing. We’ve got a smaller population out here. It feels like everybody’s trying to do their essential shopping out here (rather) than town.”

The business also has closed down its lunch counter, “just to try and help the community stop moving around,” Ward said.

“If we leave our lunch counter open right now, it just encourages more people to come out,” she said. “Eventually we hope we can open it up once we figure out and get a handle on how to do it most effectively.”

He said the grocery store is still finalizing its hours, but that its plan is to open from 8 a.m. to 6 p.m. every day and 9 to 12 p.m. Sundays. Special kupuna shopping hours will be held from 8 to 9 a.m. Tuesday and Friday.

While competitors, the operators of Friendly Market and Misaki’s are good friends, and when one runs out of something, they’ll borrow from the other, Misaki said.

Smaller stores that rely on Friendly Market will also be impacted. Maria Watanabe, owner of convenience store Pascua’s in Kaunakakai, said she buys some essentials like eggs from Friendly Market but will now have to find them elsewhere.

Pascua’s usually opens at 5 a.m. so residents on their way to work can grab snacks and drinks, but with many people out of a job or working fewer days, the store now opens at 6 a.m. and closes earlier, usually at 8 or 9 p.m., Watanabe said. Customers are asked to wear masks and are limited to four people at a time inside.

At A Touch of Molokai, the gift shop and convenience store she runs on the west end, she’s put up a sign that asks anyone who’s been on island for fewer than two weeks to stay out of the store.

“It’s going to be changed a lot now for Molokai,” said Watanabe, who also had to close Imports Gift Shop under the county’s emergency orders. “Everybody you see walking in the street, they have a mask.”

Kualapuu Market, another main grocery store on island, was closed Sunday and could not be reached for comment.

In a news release, English said they were working to ensure other stores in Kaunakakai have sufficient food and resources for residents. DeCoite urged people to comply with stay-at-home orders.

“We know this is in the Molokai community,” she said. “The way we kokua one another is to stay at home! It is all of our responsibility to stop the spread by staying home! I know we are all scared and want information. For now, stay at home.”

There are now 281 cases in Honolulu County, 43 in Maui County, 22 in Hawaii County and 16 in Kauai County. Two residents have been diagnosed out of state and the residences of seven are unknown.

On Saturday, an East Oahu man who was older than 65 and was being hospitalized, died of COVID-19, Hawaii’s fourth fatality. Officials said the man’s coronavirus case is travel-related, since he may have been exposed to someone who had traveled. 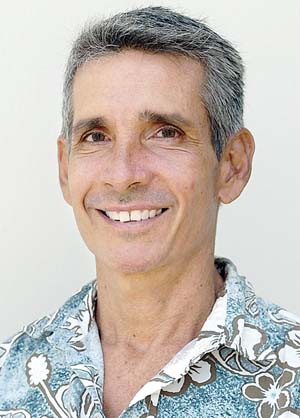