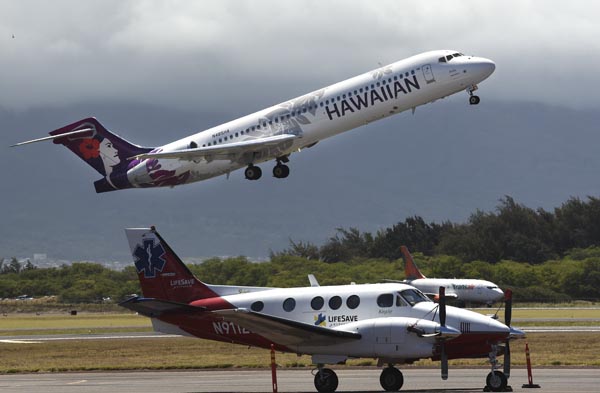 A Hawaiian Airlines jet takes off from Kahului Airport on Thursday afternoon. Gov. David Ige said Thursday that the state, counties and airlines are discussing the best way to lift the 14-day mandatory quarantine for interisland travelers. The governor did not give a specific date as to when the interisland quarantine rules might be lifted. The Maui News / MATTHEW THAYER photo

Gov. David Ige said talks are ongoing between the counties, airlines and other stakeholders on how best to proceed with the lifting of the mandatory 14-day interisland travel quarantine, though he stopped short when asked to give a firm date.

“We don’t have a hard timeline,” said Ige, who earlier this week extended the travel quarantine for both out-of-state and interisland travelers through June 30.

The governor said that up to four to five weeks ago, there were virtually no restrictions on travel. Now 22 states have some type of travel restrictions, but Hawaii is the only one really implementing them, Ige said.

On March 26, the state began requiring out-of-state travelers to quarantine for 14 days upon arrival. On April 1, that order was extended to interisland travelers. Hawaii’s low case numbers have opened up the possibility of lifting the interisland quarantine only, Ige said.

“Health measures are pointing in the right direction to make this move . . . with infection levels appearing to be under control across the state,” he explained.

On Thursday, there were four new COVID-19 cases in the state — one in Maui County and three on Hawaii island, including two family members.

Until Thursday, Maui County had gone about a week and a half without any new cases. There have now been 647 total cases reported in the state — 416 in Honolulu County, 118 in Maui County, 82 in Hawaii County and 21 in Kauai County. Ten residents have been diagnosed out of state. There have been 17 deaths, 11 on Oahu and six on Maui.

Ige added that when the interisland travel quarantine is lifted, there will likely be additional cases, but the state has the capacity to handle it.

Lt. Gov. Josh Green said that statewide, only 39 percent of intensive care unit beds are being occupied and that 51 percent of total hospital beds are in use. And, only 9 percent of the available ventilators are currently in use.

Green said there are other reasons for lifting the quarantine beyond the fact that the state health care system is able to handle more cases. He said he knows of some end-of-life situations where loved ones are on different islands, and the quarantine makes travel difficult. He also understood that people may have medical or business appointments on other islands.

“All of this resonates with us,” Green said at the news conference. “But only provided we don’t take greater risks and make people sick.”

Maui County Managing Director Sandy Baz said during a county news conference Thursday afternoon that Mayor Michael Victorino has been talking to the governor and other mayors on the issue, “and he has shared his concerns and comments about it.”

“As we look closer towards reopening interisland travel without quarantining, we will have to make sure and see that our needs are met, to make sure to protect our community,” said Baz, who was filling in for the mayor as he attended Baldwin High School’s modified graduation.

State Department of Transportation spokesman Tim Sakahara said that if the interisland travel quarantine is lifted, temperature checks at the airport will continue and that there would be new forms for interisland travelers to fill out with questions on their health and contact information.

The form has yet to be finalized, Sakahara said.

In addition, the state will have to figure out how to “flag” out-of-state visitors who may fly into Oahu and later travel to a Neighbor Island.

Sakahara said the state Legislature is setting aside $36 million for thermal scanning machines. Once the DOT secures contracts with eligible companies, Sakahara estimated that it would take 30 to 60 days to set up a pilot project to see how the machines will run.

He said the department is “not waiting, but are planning for the new normal and what that will look like post pandemic.”

When asked if he supported having passengers tested before they come to Hawaii, as U.S. Rep. Ed Case has suggested, Ige said he has discussed that with federal officials and others, but that it would probably be something that would need to be done across the country and perhaps conducted by the Transportation Security Administration.

For now, the state is looking into a smartphone-type of application that could help keep track of out-of-state visitors, Ige said.

On Wednesday, 290 visitors arrived from out of state, according to data from the Hawaii Tourism Authority. On Maui there were 14 visitors, along with one person relocating to Maui and 12 returning residents. There was one out-of-state flight to the Valley Isle on Wednesday.

In other state news, the Health Department said that Hawaii has the capacity to conduct 3,620 tests per day, according to a news release. This will now allow health care providers to consider testing those they suspect may be infected, a shift from DOH’s earlier guidance that patients should have specific symptoms and epidemiological criteria before testing.

In the past three weeks, the number of sites conducting tests has increased from five to 11, and testing is now available in all four counties, including on all of the Neighbor Islands.

One of the critical requirements for the state to “confidently and safely” reopen is readily accessible COVID-19 tests for all who meet recommended testing criteria, with test results available within 48 hours, DOH said.

As of Monday, the state has more than 38,300 tests on hand for COVID-19 and is performing an average of 690 tests each day, with results available the same day or by the next day, according to data compiled by DOH. The maximum turnaround time is three days. The number of staff trained to perform the tests has also doubled, jumping from 68 to 135 within the past month.

Hawaii initially had to send tests to Mainland labs, but there was a backlog and results could take up to a week to receive, the department said.

* Melissa Tanji can be reached at mtanji@mauinews.com. Staff Writer Dakota Grossman contributed to this report.

A Hawaiian Airlines jet takes off from Kahului Airport on Thursday afternoon. Gov. David Ige said Thursday that the state, counties and airlines are discussing the best way to lift the 14-day mandatory quarantine for interisland travelers. The governor did not give a specific date as to when the interisland quarantine rules might be lifted. The Maui News / MATTHEW THAYER photo