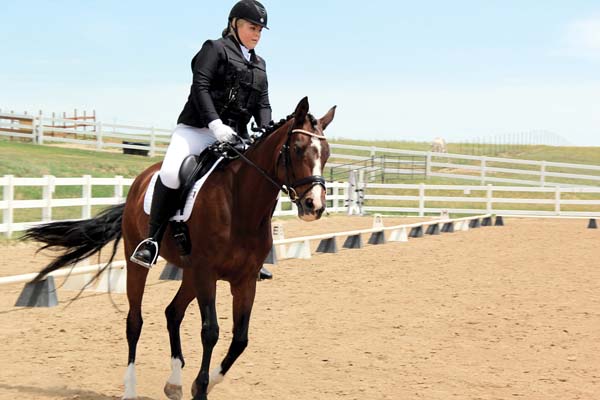 Summer Mayo will compete in the Rocky Mountain Dressage Society Championships this weekend. The 28-year-old from Lahaina hopes to one day compete in the Olympics, a dream that is only possible after she turned her life around. Sam Loree photo

Summer Mayo will compete in the Rocky Mountain Dressage Society Championships this weekend.

Being a former multi-sport athlete at Lahainaluna High School, it is not surprising that Mayo is excelling in an athletic endeavor.

Hearing the road she traveled to get to this weekend’s event in Parker, Colo., makes it much more impressive.

Mayo swam and played volleyball, water polo and basketball for the Lunas, but left town to move in with a boyfriend three weeks prior to graduating in 2009. 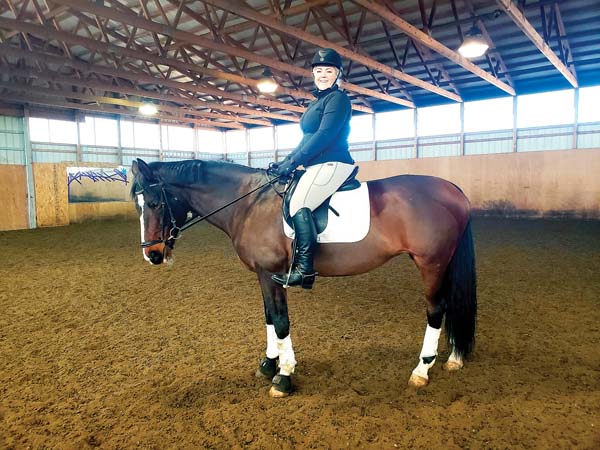 Summer Mayo poses atop her rescue horse Drizelle. “She was the horse that helped me believe it was OK to start riding again,” Mayo said. Tina Feska photo

From there, she fell into drug use. Her rock bottom came “when I was hospitalized for a week with a septic infection and I still used because I didn’t care,” she said. “I was found by a firefighter by the side of the road. I was admitted and I had no regards for my well-being or anything like that. I just picked up in the hospital right where I left off. After that I got arrested and finally once the effects of the addiction, once the drug was taken away from me in jail, I could finally think a little straighter.

“Just to have come from that, to where I am today — I mean I’m pursuing an Olympic level in my sport — so I just want to kind of inspire people who see my story and know that the place I was in, it kind of gives hope,” Mayo said. “I was really, really young when I went to prison.”

Indeed, Mayo spent 13 months at the Women’s Community Correctional Center after a DUI conviction on Maui broke her agreement with the Maui Drug Court.

“Honestly, Drug Court saved my life,” she said. “I spent about five (months) at MCCC and then I was let out and I actually failed in the Drug Court program because I drank — I didn’t do drugs again — but I drank and I got a DUI. When I went to WCCC I was there for 13 months.”

Without the help of her father, Don Mayo, she said she might be dead. She says the DUI was her only stumble in the last eight years.

Don Mayo got her to Texas, where she went to a residential treatment program for almost a year.

“I don’t think I’d be here today without my dad,” Mayo said. “He was a huge contributor to getting me sober. He was there every court case, he walked me through prison, walked me through the courts. Really just stood by me. We really came up with a plan together to get me off the island and get me somewhere new where I could have really great care.”

“She went through some tough times,” Rickard said. “It was not only basketball, but I was just hoping and praying that she would get better. She’s one good girl and when she was at practice, she was very respectful. Always did what we said, always was looking to learn more. I was always wondering where she ended up.

“Now that I hear she’s doing well, I’m happy for her because you know what? She was a really good girl. She is a young lady who deserves happiness.”

Mayo’s move to Texas led to three loves — her new sport, her horse “Drizelle” and her boyfriend Sam Loree.

“Thankfully I fell in love with a sport and found something that is what I truly live for,” Mayo said. “After graduating from my rehabilitation program I fell into a little bit of a depression where I was kind of stagnant in my routine. I was doing the same thing every day and I started to get depressed. My dad said, ‘Why don’t you go on a trail ride?’ So I was actually supposed to go on a trail ride, but it turned out to be a dressage barn and I rode dressage horse and I absolutely fell in love with it. I’m not sure that I have stopped riding less that four or five days a week since then.”

The sport “is very expensive and I actually was in no position to own a horse, but our story was a little bit crazy — I ended up rescuing a horse. It turned out to be a $25,000 horse. We kind of saved each other,” Mayo said. “She has a monthly rent that is almost more than my rent. … The show season is here and I am going to the championships. The average show cost is $1,000 to $1,200.”

There were other hurdles that came up before she got to this point, including a major injury that threatened her sobriety and future health after she fell off a horse and broke two vertebrae in her back just six months into her dressage career.

“That was extremely difficult mentally and physically. I had to teach myself how to walk again, move again and then ride again,” Mayo said. “I was supposed to be hospitalized and I refused to be hospitalized. The doctors said ‘I really think you need to consider the amount of pain you’re going to be in’ and I was, like, ‘I don’t care. I’d rather feel the pain than ever feel like I felt before. I’d rather suffer.’ There was no question ever for me to get even near those (drugs) while I was injured.”

Meeting and saving Drizelle, nicknamed ZZ, from rescue in 2017 was the first big step back.

“She was the horse that helped me believe it was OK to start riding again,” Mayo said. “She was the game-changer for me.”

Mayo’s trainer Sarah Storch is also a huge part of her life. Dressage is an intricate sport “where you basically have a dance partner. You do like very distinct movements and manipulate moves on top of the horse.”

The Olympics are a far off dream, but Mayo and Drizelle will be part of more than 300 riders this weekend.

“This is a sport that takes years and years and years of manipulation to do it correctly,” Mayo said. “A lot of the people that are at that level are in their 30s, 40s and 50s. I am working towards getting there.”

Mayo, who has earned her GED and is now considering beauty school, has one message for the girl who left Lahainaluna three weeks short of graduation.

“I would probably say that ‘no matter what you have been through it’s never too late to make a change and that life is so worth living and there’s so much out there,’ “ Mayo said. “And that there’s hope for everybody no matter what your situation or your history.”