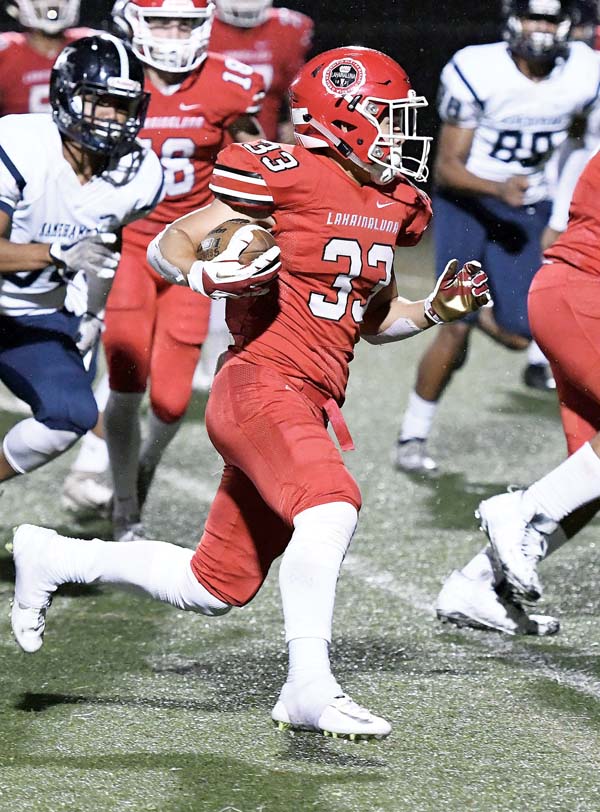 Joshua Tihada of Lahainaluna High School has scored a record 15 touchdowns in state tournament play — he and the Lunas host Roosevelt in a D-II state semifinal tonight at 7 p.m. -- The Maui News / MATTHEW THAYER photo

LAHAINA — Joshua Tihada remembers tagging along as a first-grader with his father, Joey Tihada, to Lahainaluna High School football practice.

On Wednesday, before one of the final practices of his storied career as a Luna, Joshua Tihada took a moment to reflect as his team prepared for tonight’s First Hawaiian Bank/HHSAA Division II semifinal against Roosevelt at Sue Cooley Stadium.

The winner will earn a spot in the D-II state final Friday at Aloha Stadium.

“I mean, there’s a lot of emotions for all of us as seniors,” said Tihada, a 5-foot-9, 185-pound running back who will likely also see action at linebacker tonight. “For me, you know, I just come out here just trying to work my hardest and to finish strong, as always.”

He holds touchdown records in the Maui Interscholastic League for a single season (17, this year), and career in league play (43) and overall career (63). 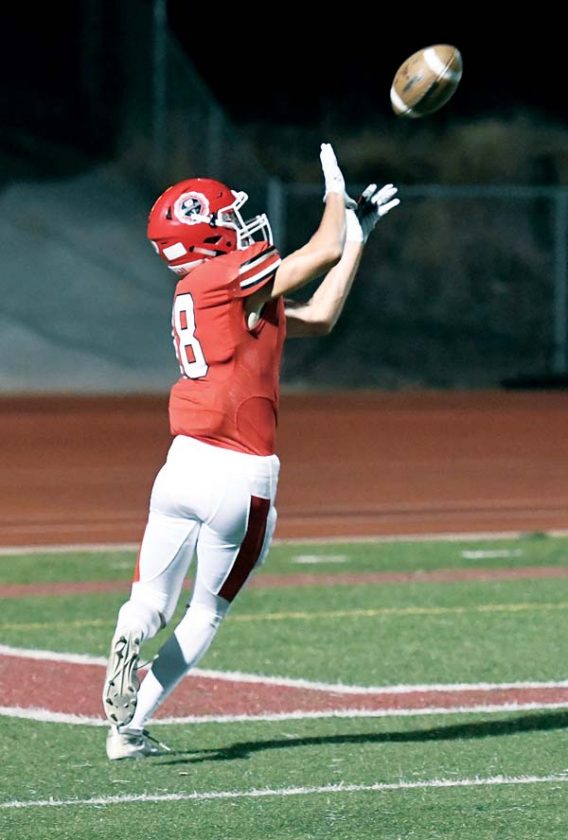 Lahainaluna’s Kai Bookland had a team-high 24 receptions, which was tied for third in the MIL, and six touchdown catches this season. -- The Maui News / MATTHEW THAYER photo

With possibly two more games to play, he is already the all-time touchdowns leader in Hawaii High School Athletic Association state-tournament play at all levels with 15, three more than anyone else.

The number that means much more to Tihada is four — as in a fourth state title for the Lunas, who are the three-time defending state champions at the D-II level.

Tihada — who is considering trying to gain walk-on status to play at the University of Hawaii, San Diego State or Arizona –gained 127 yards and scored two touchdowns as a freshman for a Lunas team that went 5-3 in MIL play and had to win three state tournament games to claim the school’s first state crown. Lahainaluna started what is now a record 25-game MIL winning streak with a victory in the final league game that season.

“I feel like my freshman year just set a path for us,” Tihada said. “There was great leadership that year — I still have some of those memories with my teammates now. My brother (Justice Tihada) played on that team, so there’s a lot of emotion. I just feel like it created a path for us as kids in Lahaina.”

Kai Bookland is a senior wide receiver who had a team-high 24 receptions, which was tied for third in the league. He averaged 18.2 yards per catch and hauled in six touchdowns.

Bookland and Tihada are among four players quite likely to see significant action both ways tonight.

“I mean, a lot of great memories out here,” Bookland said. “It’s been real fun, but we have to kind of put that off to the side right now until after the game — we’re focused on the game right now.”

Bookland is ready to play defensive back as much as he is needed.

“It’s fun, I mean you never want to come off the field as a player, so any way I can help the team out it’s going to be fun and enjoyable,” Bookland said.

The Lunas have had 28 days since their last game, a 49-0 win over Maui High that finished their third straight 8-0 MIL slate. They have won 20 of their last 21 games over the last two seasons and seven straight state tournament games in their current three-peat.

“It took a lot, but we just had to make sure everyone stayed prepared for the upcoming game,” Bookland said. “Don’t look past it and don’t take it for granted because we could get beat in the first round and we don’t want to do that. We want to keep what we’ve got going right now, keep the streak going.”

Tihada is a soft-spoken but clearly strong leader for this group, as is Bookland. Tihada has 60 career rushing touchdowns — the state record belongs to Mililani’s Vavae Malepeai, who had 71 rushing scores. He now plays for Southern California.

“He works his butt off each and every day,” Bookland said of Tihada. “He’s a great leader on the team. He leads by example for sure. Great person, too. Great person to hang around and just be around.”

Fellow seniors Nainoa Kulukulualani-Sales, a 5-5 slotback/defensive back, and two-way lineman Tuipulotu Lai are the other likely players to see action on both sides of the ball tonight.

Kulukulualani-Sales will be playing in front of his father, Lui Sales, a former standout Luna himself.

“I’m very excited, it’s my last year playing both ways,” Kulukulualani-Sales said. “I just want to show my dad proud because he brought me here to this team.”

Lai, who is 6-2 and 280 pounds, has football scholarship offers from BYU and Northern Colorado.

“We’re very hungry, we have just been waiting for this day, for this game,” Lai said. “Everybody is just hungry for everything. … Lahaina has always been home to us. It’s a great community, it’s a great program. I suggest that if you ever want to change yourself … it changed me to who I am today. I really appreciate it.

“I’m really thankful for all these coaches and all the great people around here.”