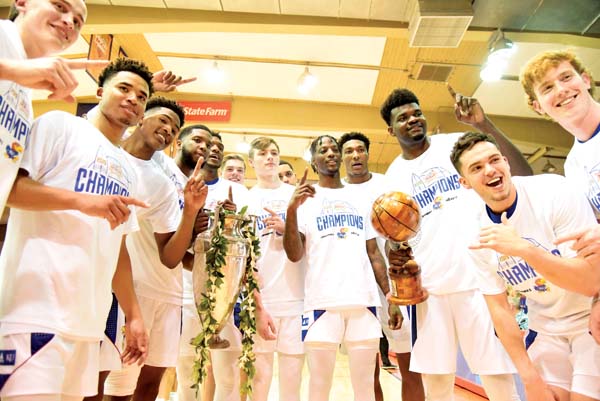 LAHAINA — In a game befitting of the Maui Jim Maui Invitational championship, fourth-ranked Kansas saw its two biggest stars step to the forefront when it counted most.

Co-Most Valuable Players Devon Dotson and Udoka Azubuike combined to score 60 points to lead the Jayhawks to a 90-84 overtime win over Dayton on Wednesday afternoon at the Lahaina Civic Center.

Kansas coach Bill Self said his point guard Dotson, who had 31 points, four assists and five steals, and center Azubuike, who had 29 points and four blocked shots, have never had a game as good on the same day.

Each scored career highs for the Jayhawks (6-1).

“These two were terrific,” Self said. 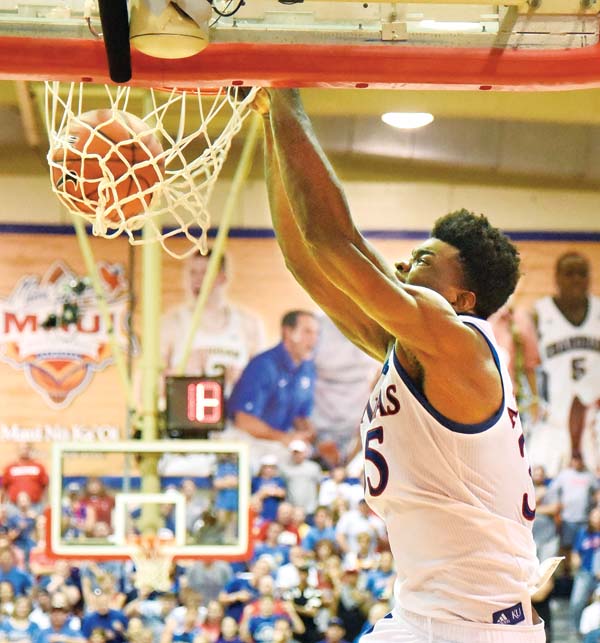 The game itself was also extraordinary. It featured 20 lead changes and 14 ties, neither team led by more than eight points and a clutch 3-pointer by Dayton’s Jalen Crutcher with 1.4 seconds left in regulation sent the game to overtime.

“Well I don’t know how people felt, maybe not the most artistic at times. That was a great basketball game,” Self said. “Two good teams competing against each other and in a terrific atmosphere. Proud to be a part of it and certainly very fortunate that we came out on top.”

The LCC was a raucous back-and-forth battle between two rabid fan bases in this one.

“That was a lot of fun and it was probably the least control I can remember having from the sideline because it’s so loud,” Self said. “And our place is loud, our place isn’t any louder than that because you have space in our place. There’s no space in this one.”

Dayton (5-1) came to Maui unranked but is likely to crack the Top 25 after its performance here. 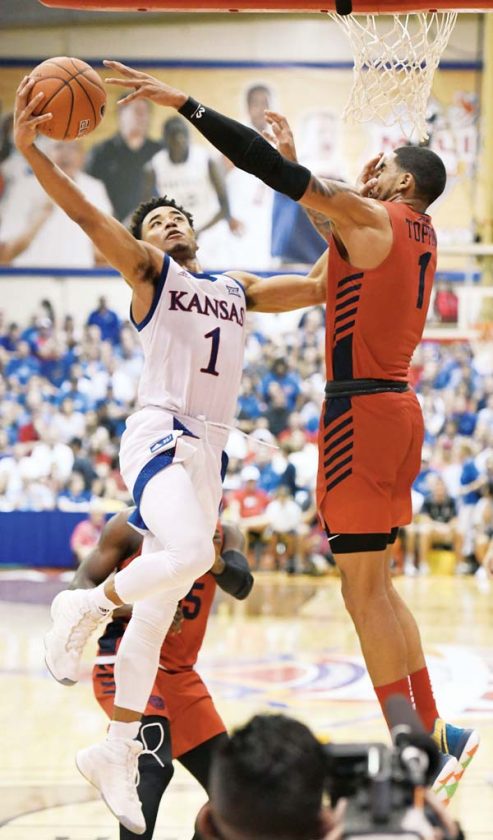 Kansas’ Devon Dotson drives to the basket against Dayton’s Obi Toppin in the second half Wednesday.

“Well right now I’m very, very proud of our team,” Dayton coach Anthony Grant said. “Our guys battled three highly competitive games in three days. These guys gave everything they had for each other. They battled it out all the way through the end.”

The Flyers held the biggest advantage of the game for either team at 66-58 with 7:45 to play on a 3-pointer by Ibi Watson, who finished with 16 points. Ryan Mikesell had 19 points, and the Flyers shot 16-for-33 from beyond the arc.

“Obviously, it’s a tough loss,” Grant said. “But like I told them in the locker room, whatever it was five, six days ago when we came here we wanted to find out what we needed to do as a team to continue to move forward, and I think these guys did a great job of answering that.”

Obi Toppin, a 6-foot-9, 220-pound redshirt sophomore, made a big name for himself here. He had 18 points and nine rebounds while battling Azubuike all game long. 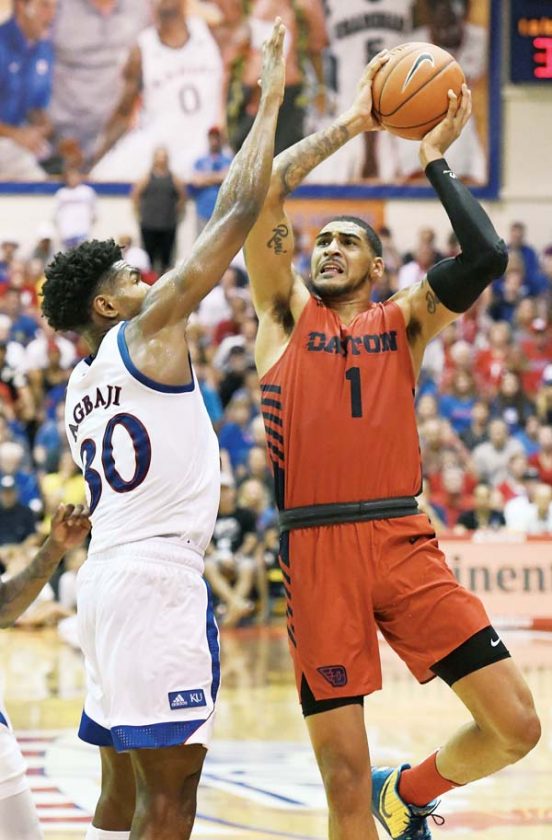 Azubuike scored the Jayhawks’ first nine points in overtime before he fouled out with 27 seconds to play. He was just as respectful of Toppin after the game.

“Well, Obi is a great player,” Azubuike said. “He was really good down the stretch for their team. It was a battle between me and him. I mean, he was really good. I mean, they tried to play inside out with him. And then when he got the ball he tried to make plays for his teammates. And also my teammates trusted me enough to give me the ball and I did the same.”

Dotson sat next to the tournament championship and MVP trophies during the postgame press conference and could not stop smiling.

“I mean, this is the start of it. Yeah, the first of many.” Dotson said of the trophies. “I mean, so we’re not satisfied. Looking to — we’re going to enjoy this one, though — but we’re looking to get back to work.”

Dotson, Azubuike and Toppin were named to the all-tournament team, along with Anthony Edwards of Georgia and Landers Nolly II of Virginia Tech. 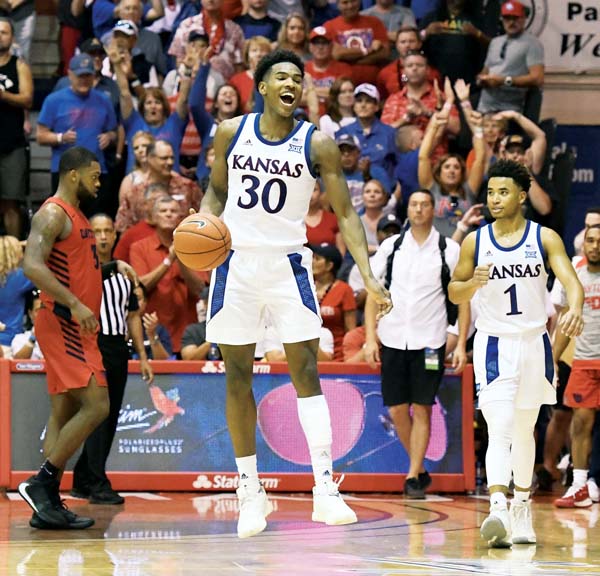 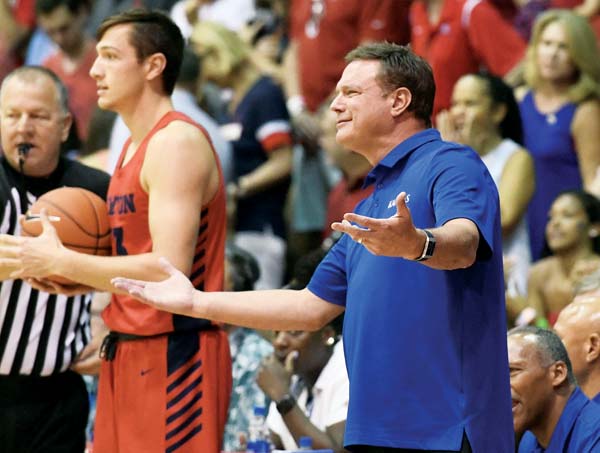 Kansas coach Bill Self talks to his players in the second half.