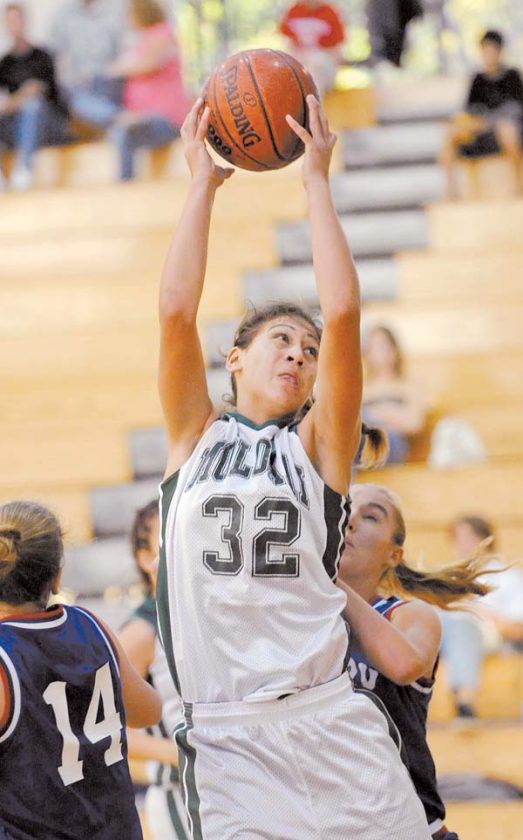 In every mile, every game and every training session, Kalei Adolpho found value in all her student-athlete experiences — values she has brought back home as the Molokai High School girls basketball coach.

Before Adolpho entered the Maui Interscholastic League in 2007, her shoes already had miles of experience in hilly Hoolehua. And by the time she graduated from the University of Hawaii at Manoa, her accolades included Hawaii High School Athletic Association state titles in basketball, volleyball and track and field, as well as a successful career as a two-sport athlete in volleyball and basketball for the Rainbow Wahine.

“As a coach, I think the biggest thing that I took away from being an athlete is that, I know it sounds a bit cliche, but it’s not necessarily about winning and losing,” said Adolpho, who’s also Molokai Middle School’s physical education teacher. “It’s so much about the lessons you learn and the people you meet and the relationships that you form, that’s what’s most important and as a coach now, I can look back and reflect on my career and see how I can make the most impact on these young ladies.”

Her work ethic and attitude stemmed from childhood, beginning when Adolpho’s father used to have her run the neighborhood to improve her mental and physical strength.

“Running is a tough sport,” she said. “I learned so much from that, even as a young athlete, pushing yourself to your limits and battling with yourself and self doubt, and all those kinds of things, that came from running. … When I got to high school, I wanted to continue to do that.” 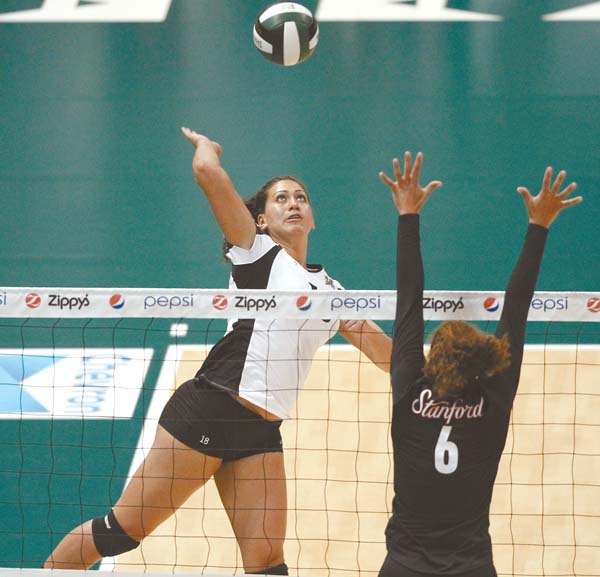 University of Hawaii middle hitter Kalei Adolpho slides to the outside for an attack during a match against Stanford in 2012. — UNIVERSITY OF HAWAII ATHLETICS photo

Prior to becoming a star on the volleyball and basketball courts, Adolpho finished in fifth place at the Maui Interscholastic League cross country championships as a freshman, and 19th at the state championship meet a few weeks later.

While it was her first and only season on the Molokai cross country team, she competed in track and field all four years. Adolpho raced the 1,500 and 3,000 meters, earned state medals in the 800 and concluded her track career with a gold in the high jump.

Adolpho is most well-known for her skills on the court, such as leading the Farmers to the Division II basketball state championship title as a sophomore, which earned her state tournament MVP honors.

However, she only recalls the quality relationships she had with the Farmers, not so much the competition, and “the funny moments shared off the court.”

“I remember the team being really close, we were a group of girls that played together since we were like 5th grade, and we traveled off-island together, so we knew each other really well and we worked really hard,” she said. “That was huge for us, just because we were such a close-knit group and that was something we really wanted to do since we were young.” 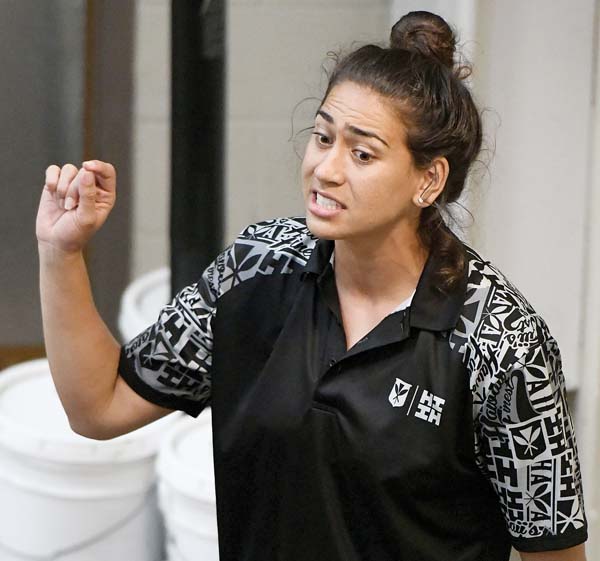 Adolpho led Molokai to a D-II state volleyball title as a senior. Both of her state title teams were firsts for the Farmers.

She was named The Maui News Girl Athlete of the Year in 2010 and 2011, the first and only Molokai athlete to earn that honor. Adolpho was also selected to the Hawaii High School Hall of Fame and was the first female athlete from Molokai to sign with a D-I athletic program on scholarship.

But even then, the 6-foot-1 multi-sport athlete “was surprised” and didn’t realize her potential when university athletic programs became interested, and navigating the recruiting process was a brand new experience, Adolpho said.

“I think being true with yourself and being true to the kind of athlete that you are — the kind of priorities you have, being who you want to be and doing what you want to do — is super important when choosing a school,” she said as advice to any student-athlete looking to play sports at the next level.

Playing for the Rainbow Wahine was a good choice, she said, and from 2011 to 2015, Adolpho competed on both the basketball and volleyball teams.

In volleyball, she became Hawaii’s starting middle hitter after her freshman year and became an integral part of the nationally renowned program. She finished her career with 599 kills and 377 blocks, and was an all-Big West first-team selection her senior year.

During her career with the Rainbow Wahine basketball team, she started in 50 of 94 games she played, averaging 4.4 points and 4.6 rebounds a game.

Adolpho said that being a two-sport collegiate athlete had its challenges, such as balancing academics with athletics and maintaining a social life between the hours of training, but she ultimately loved playing on both teams.

“She was in season for seven months in a row, it’s really, really hard to do, so that in itself tells you a lot about the person that she is,” said legendary UH women’s volleyball coach Dave Shoji, who won four national titles prior to retirement in 2017. “She’s a hard worker and mentally tough, and she obviously had other qualities — very coachable, very likable, great teammate, and basically just did what you told her to do, no questions asked.”

Shoji said that Adolpho’s qualities had a lot to do with her growing up on Molokai surrounded by a close-knit family that included six siblings.

“I think young girls nowadays need a strong woman to coach them and I think certainly (the Farmers) have that in Kalei,” he said. “She’s just a good role model just the way she is and I’m sure she will be a good coach and do a lot of teaching and a lot team building.

“They’ll have a great experience with Kalei.”

Adolpho paid tribute to all the high school, club and college coaches who, throughout her sports journey, held her accountable on and off the court.

In addition to Shoji, UH’s former assistant volleyball coach and current head coach, Robyn Ah Mow, had a “tough love coaching style” that Adolpho hopes to reflect back into the Farmers program.

And former Molokai girls basketball coach Michael Hooper always “pushed you as far as the game went, but was also someone you knew who genuinely cared about you as a person,” she said.

“These are things I really want to continue and carry as a coach,” she said.

After concluding her college career in 2016, Adolpho knew she wanted to return home and find her new calling, even if it meant turning down an opportunity to play professional volleyball overseas in Germany.

“I love home, I love to be around my family, it’s just something that I grew up doing,” said Adolpho. “I was raised really family-orientated, so that always stuck with me even when I was in school, I always knew I wanted to come home and be with family.”

Adolpho spent time volunteer coaching with the Farmers girls basketball team, and when the head coach position opened up the following year, she naturally filled the role.

“It’s so great to have Molokai Farmer alumni coaching and giving back to our student-athletes here at Molokai High School,” said Lee DeRouin, the school’s current athletic director and former basketball coach. “Coach Kalei being such a successful collegiate student-athlete at the University of Hawaii in both volleyball and basketball is something very special for our student-athletes here at Molokai High School. It really gives our kids the motivation and push to do their best every day.”

Two seasons in and Adolpho said she’s enjoyed being around the game and the Lady Farmers again. Although it’s challenging at times, she hopes to teach the Molokai squad a few lessons she learned throughout her athletic career.

“It can’t be about the winning. It’s about playing for your teammates, and coming in and playing your all even on the days you don’t feel like it, and wanting to work out hard for the people beside you,” she said. “It’s about enjoying being who you are around and enjoying the sport itself, and so I think those are all foundational in being a good team.”

* Dakota Grossman is a dgrossman@mauinews.com