One carries a notebook so detailed on all possible opponents that it would make the FBI jealous.

The other carries an ever-present smile and commitment to the program that never stops.

Todd Hayase and Conrad Bolor — the co-head coaches of the well-oiled machine that is the Lahainaluna High School wrestling program.

Hayase, a 1983 Baldwin graduate who wrestled collegiately at Linfield College in McMinnville, Ore., for two seasons, has been in charge of the Lunas program that has dominated the Maui Interscholastic League for over a decade.

In 2015, the Lunas swept the boys and girls state titles, becoming the first Neighbor Island program to win each of them. They added the 2017 girls state crown and are now nearly always in the discussion for the team crowns on both sides of the mat. 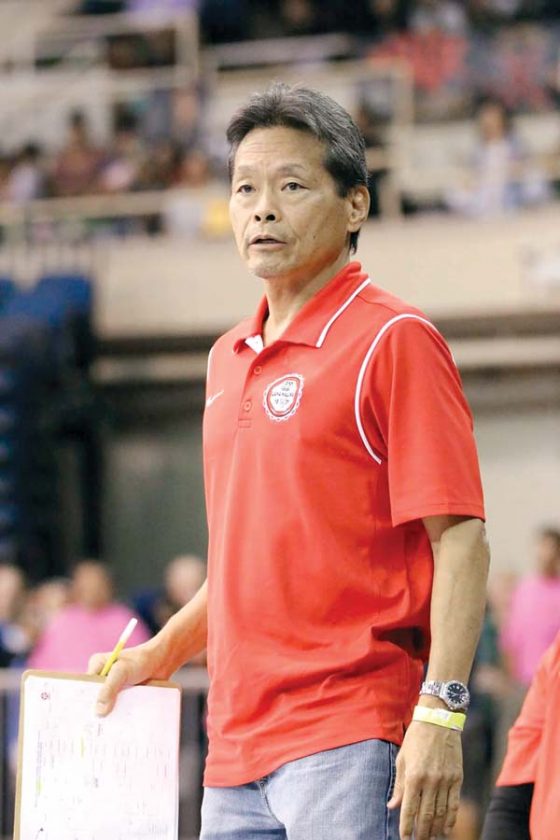 Todd Hayase coaches during the state championships in February. Hayase started at Lahainaluna as an assistant in 1994 and became head coach in 2000.

“There’s no doubt, 2015 was really special, I mean that was a special group,” said Hayase. “To win both the boys and girls (state titles), to be the first Neighbor Island (program to do so), that was really special. We set the goals, but I’ve always said ‘championships are nice, individual and team championships are nice, but ultimately it’s teaching kids about life.’

“All we’re doing is just using the sport of wrestling to teach them about life, about hard work and commitment and teamwork.”

Hayase wrestled at Baldwin under legendary coach Garner Ivey and Mike Ueki. He has been a counselor at Lahaina Intermediate School since 1993.

Hayase started at Lahainaluna as an assistant in 1994 and became head coach in 2000, according to the wife and daughter of his predecessor Neal Nakata, who still helps with the program.

There is a definite brotherhood type of bond between the Lunas’ impressive list of assistant coaches that includes Nakata, Shane Cunanan, Zane Monteleone and countless former athletes who constantly check in all the time.

Lindsey Ball is a former head coach at Maui High, while Kim Ball and Nakata are former Lunas head coaches. The Ball brothers run the head tables at nearly every tournament in Maui County and often take part in Lunas practices.

“Maybe on paper I might be listed as head coach, but I’ve never looked at it that way,” Hayase said. “We’re all one and we’re all equal, we all have the same voice. Sure, I do a lot of the administrative stuff that is required of head coach, but it’s just a title.

“We’re all the same, we’re all equal, we all have our strengths and we all contribute to the program.”

Bolor graduated from Lahainaluna in 1986 and his son Conrad Bolor Jr. graduated from the school and program in 2017. Bolor Sr. is the head of security for Luakai condominiums in Napili.

“It’s very special, everyone has got their own thing going to add to the perfect stew, basically,” Bolor said of the coaching group.

Bolor is quick to the point when asked about Hayase’s role with the program.

“He’s the brains, actually, of this group,” Bolor said. “He does so much homework, he knows all the records of every wrestler in the state, basically.”

That homework is kept in the notebook, the infamous well-worn book he carries under his arm.

“Coach Shane and I laugh, we refer to Coach Todd as the ‘Rain Man,’ “ Kim Ball said. “He knows more about every wrestler in the state than any other coach anywhere. We laugh that he knows not only their record, their past placing in the state and in the conference. He knows the year, what school they are. He also probably knows their grade-point average and who their last girlfriend was. He is thorough.”

For years, Bolor has had a group of dedicated wrestlers who use his garage as a workout space.

“I’ve got about 10 girls and I’ve got about seven boys right now,” Bolor said. “I think it started when (three-time state champ) Travis Okano started working out here. When Travis was wrestling I started off with maybe three or four boys. They started to see his results and it just grew and grew from there.”

The alumni connection is strong.

“What’s really special, is in December, in late December, when we’re having our winter practices and to see five, six, seven, eight, nine college kids come back, and they’re all competing on the Mainland also, and they come back,” Hayase said. “We try to tell our wrestlers, ‘Hey, these alumni kids are coming and I would be at the beach.’ Yeah, they’re training, but they’re coming back and giving back to the current wrestlers.

“We keep reminding our kids that they’re giving back — that’s a Lahaina thing, you know?”

Ivy Navarro, the 2016 state champion at 107 pounds, is one of the lifters at Bolor’s garage. She was fifth in the women’s national tournament in 2019 while competing for Southwest Oregon Community College. Her sister, Ira Navarro, is a two-time state champion and will join Ivy at the University of Providence in Great Falls, Mont., in the fall.

“I wouldn’t think I would be in college wrestling if it wasn’t for the (Lahainaluna program),” Ivy Navarro said. “The coaches taught me to go out there and wrestle, just try it out, see how it goes. And it worked out. … I owe a lot to the Lahainaluna coaches.”

Hayase points to the Maui Style Wrestling youth program that began in 1992 — and now has 11 clubs with more than 500 participants annually on Maui, Molokai and Lanai — as being a large part of the success of the Lunas’ program.

Bolor had 92 wrestlers signed up for his Lahaina Roughnecks program before the Maui Style Wrestling season was wiped out by the coronavirus pandemic. His youth wrestlers were a major part of the 2015 Lunas state title teams, including Hercules Mataafa, now a member of the Minnesota Vikings, and his sister Lalelei Mataafa, a four-time state champion who is now playing water polo for the University of Hawaii, as well as both Navarro sisters.

“In addition to that, the really serious kids, they would be going off to these summer clinics, summer camps on the Mainland,” Hayase said. “So, it’s going to be really odd that we’re not doing summer wrestling this year. As they say, ‘Summer wrestling creates winter champions.’ “

“I don’t think you can find a program that works harder than this one,” he said. “There are a lot of hard-working programs and there may be some that work equally as hard, but you can’t find one that works harder, top to bottom, the coaching staff is involved with the kids. The kids they see as state (high school) champions they have been working with since they were first-graders.”

* Robert Collias is at rcollis@mauinews.com.