‘It’s been a privilege. . . . The pleasure has been mine,’ says now-retired Mills 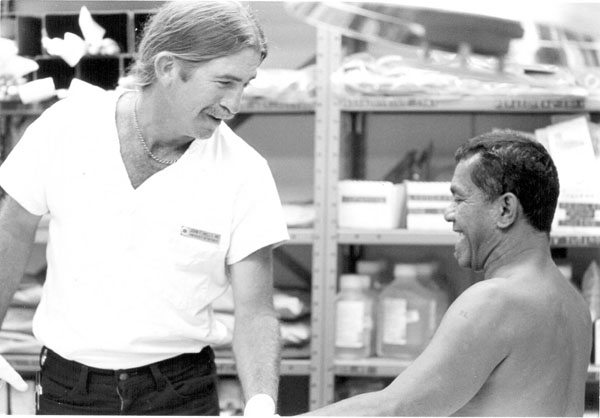 In this photo taken in the early 1990s for a newspaper feature on a day in the life of Maui Memorial Hospital’s emergency room, Dr. John Mills sutures a patient. Reflecting on his 40 years at the hospital, Mills said it’s been a privilege for him to care for his patients and the community. His colleagues remember him affectionately as “Bubba” and say his “generosity, expertise and compassion” won’t be forgotten.

As an emergency room physician at Maui Memorial Medical Center for 40 years, Dr. John Mills has seen his share of trauma from car crashes, broken bones, lacerations and the multitude of other emergencies patients report after walking in the door of the island’s only acute-care hospital.

Now, though, the time has come for Mills to hang up his stethoscope, retiring as of September to spend more time with his wife, Debra Morrill; help raise his 8-year-old grandson; travel; play golf and perhaps do a little fishing.

“It’s been a privilege to do what I’ve done for the community of Maui, the people of Maui,” the Kula resident said Tuesday. “The pleasure has been mine.”

Mills, 69, was one of the physicians to respond to Maui Memorial’s ER on April 28, 1988, to treat passengers and crew members who were aboard Aloha Airlines Flight 243. The aircraft underwent an explosive decompression, and 18 feet of its cabin roof was blown off at 24,000 feet. Pilots brought it in for a miraculous emergency landing at Kahului Airport.

“I was off that day, but responded to an emergency call to report to the ER,” Mills said.

The aircraft passengers and crew suffered trauma from sudden decompression at more than 20,000 feet, and many sustained lacerations from flying debris, he said.

“There was a lot of psychological shock . . . abnormal vital signs,” he said.

The emergency room staff triaged patients, prioritizing those most severely injured, he said. Luckily, there was no major trauma. The walking wounded were sent to another area of the hospital for treatment.

“We were very lucky that the injuries were no worse than they were, but feel that our staff competently handled everything as it came in. It was an eye-opener and, as a result, we felt that a plan should be implemented to handle situations like this in the future.”

The hospital staff planned and conducted exercises for various disaster scenarios, like a hurricane, flood or airline crash, Mills said.

Later, the Disaster Management Assistance Team was established under the guidance of Dr. Charlie Mitchell and the federal government, he said. The disaster assistance team remained active and viable for about 20 years until it was transferred to Oahu under the Department of Homeland Security, he added.

Another case affected Mills personally. He was shot by a rifle pellet in his right thumb on April 17, 2013, while he was golfing on the 8th hole of the Maui Country Club. Four days later, Alan Engling was arrested for shooting at police officers and golfers, injuring one in the upper right arm, from his campsite in kiawe brush near the golf course.

Engling sustained facial injuries during his arrest, and he was brought to Maui Memorial’s ER for treatment, along with the golfer he shot in the arm. Engling had shot Mills days earlier.

Mills was on duty on the day of the second shooting, but he didn’t treat Engling.

“I deferred treatment to a colleague, but I did speak with Mr. Engling,” he said. “I told him that I forgave him and didn’t harbor any ill will toward him, and that I was sorry that this whole incident occurred. Then I turned my attention to treating my golfing buddies.”

Engling faced 20 charges, including felony assault, terroristic threatening and assaulting a law enforcement officer. Eventually, he was found unfit to stand trial and was sent to the state mental hospital.

Mills said that his assessment of Maui Memorial’s emergency room care is that it’s “the best care there is,” but he has concerns.

“The population of Maui is growing, and the number of physicians is dwindling. Specialty care is at a premium, and people are turning to the ER for primary care,” he said. “It creates a difficult situation and can cause overcrowding and long wait times.”

When asked about Maui Memorial’s transfer from the quasi-public Hawaii Health Systems Corp. to Kaiser Permanente, Mills said that he believes the hospital is “a healthy institution” that’s “staffed with very caring and capable people.”

“I’m hopeful that, after the transition, Kaiser will be able to augment staffing and make positive changes into the future,” he said.

Mills leaves Maui Memorial at a time of transition, but his colleagues will remember him affectionately as “Bubba,” and as a doctor who cared for his patients at the hospital but also for the community.

“He cares so deeply for this community and has gone above and beyond to protect its members,” she said

“Everyone knows him because he didn’t let his care be limited to the confines of the hospital. He helps everyone,” she said. “He knew how to put people at ease so they got the care they needed.”

Wesley Lo, chief executive officer of Hawaii Health Systems Corp. Maui Region, said: “Bubba Mills embodies all the qualities you want in a doctor and friend. He was integral to the growth and development of our Emergency Department, teaching all of us about the value of compassion, humor and play in providing care. With the departure of so many of our trailblazers in that department in the last few years: Bubba, Pedro Giron, Ben Massenburg, Dan Brades and more, we are reminded about how much our health care abilities have grown thanks to their wisdom, vision and commitment to this community — and how lucky we were to have them lead the way.”

Mills was born in Palo Alto, Calif., and moved to Oak Ridge, Tenn., when he was 3 years old, he said. His father was a nuclear physicist at Oak Ridge, the site of the pilot plutonium plant during the Manhattan Project to build the first atomic bomb in World War II.

Then, after post-graduate studies and emergency training at San Francisco General Hospital, “I felt that emergency medicine was my calling,” he said.

Mills found his home on Maui in 1976 and, in September of that year, he was working at Maui Memorial when Mitchell approached him and said, “Let’s open an ER here!”

Forty years ago, nurses staffed Maui Memorial’s emergency room, and there was a physician on call, Mills said.

Over the years, emergency medicine has evolved into a specialty itself, he said.

Now, instead of a doctor on call, the hospital’s emergency room has a staff of more than a dozen doctors who are board certified to practice emergency medicine, he said.

Emergency room doctors need to be able to handle “most everything for the first hour or two,” Mills said. Patients are stabilized, and, if necessary, a specialist is called in.

The doctors see the “whole gamut,” from psychiatry to pediatrics, surgery to neurology, he said.

Mills said that diagnosing a patient’s symptoms involves a certain amount of medical detective work, but after a while, “you get a sense of what’s going on with a person,” he said.

Maui Memorial’s emergency room has “come a long way,” he said. “We’ve kept pace with other parts of the country.

“Our medical community is very strong, with very capable people,” he said.

As far as what he’s seen as preventable visits to the emergency room, Mills said he’s seen the results of auto collisions and is convinced that wearing seat belts saves lives and reduces injuries. And, drunken driving has “certainly been a major contributor to a lot of the traumas we’ve seen.”

However, simply paying attention to a healthy diet and getting enough exercise is “the strongest thing you can do to keep yourself out of the emergency room,” he said.