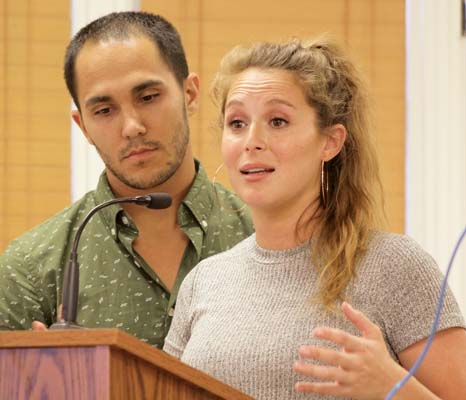 Alexa PenaVega (right) and husband Carlos PenaVega answer questions about their short-term rental home application before the Maui Planning Commission on May 28. The “Spy Kids” star and former Big Time Rush singer were inadvertently caught up in Maui’s housing crisis debate when testifiers spoke out against their rental permit. The Maui News COLLEEN UECHI photo

WAILUKU — When Carlos and Alexa PenaVega applied for a short-term rental permit last year, they didn’t know it would land them smack dab in the middle of Maui’s housing crisis debate.

The former Big Time Rush singer and the star of the film “Spy Kids” are seeking a permit to rent out their Kihei home, two years after they moved from Los Angeles to Maui looking for a change of pace.

On any other day, the permit might have undergone a routine review by the Maui Planning Commission. But last week, residents who came to speak out against the Grand Wailea’s proposed renovation caught wind of the celebrity couple’s request — to convert a recently purchased home into a short-term rental in a neighborhood already full of them.

“This is nothing personal, and you seem like lovely people, but this makes my blood boil,” said Wailuku resident Noelani Ahia. “We cannot be allowing this type of thing to continue to happen when our people, not just kanaka maoli, but local people who have been here for generations, can’t even afford to stay here.”

The commission deferred a decision May 28 and has not yet set a date to discuss the matter. 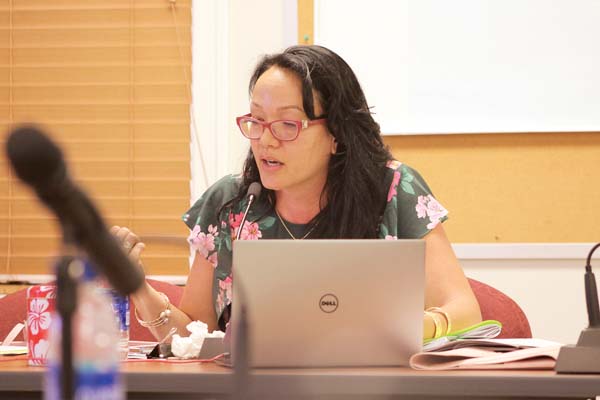 Commissioner Kellie Pali says that denying a permit to the PenaVegas would probably not produce the result the commission was looking for, which is more affordable housing. The Maui News COLLEEN UECHI photo

The PenaVegas said they didn’t come to Maui looking to rent out their place. In June 2017, the couple and their infant son, Ocean, moved into a three-bedroom, two-and-a-half bathroom home on a private gated street near the shoreline in Kihei. They found a church they liked, but their neighborhood didn’t feel quite like home; within 500 feet of their place, there are three vacation rentals.

“You’d meet somebody, and a week (later) they were gone,” Carlos PenaVega said. “For us as a growing family, we really value community out here, so that was tough.”

With Ocean now 2 years old and another boy on the way, the couple decided to move in October to a 2-acre property Upcountry, where they live with Alexa PenaVega’s father, Baruch Vega.

“We have the neighbors. We have the people we can go to and have fun with, and they have their grandkids,” Alexa PenaVega said. “So there is the sense of community where we are right now. But that was never our intention to (do a) vacation rental at all. We came here to live here.”

Carlos PenaVega said the couple is trying to create a source of income on island. Currently, they have to leave for two weeks at a time for work.

“We are trying to make it so we don’t ever have to leave, especially for our kids,” he said. “We just want to be able to stay here and just kind of create routines for them.”

Alexa Vega and Carlos Pena had both developed their own careers as singer-actors when they met and later married in January 2014. They run a YouTube channel, LexLovesLos, and have continued acting — some of their most recent works together include voicing Carlota and Bobby in Nickelodeon’s animated series “The Loud House” and starring as love interests in the Hallmark Channel film “Love at Sea.” They play a detective-photographer duo in the upcoming Hallmark film “Picture Perfect Mysteries: Newlywed and Dead.”

Testifiers told the PenaVegas on Tuesday that they had nothing against them, but that they were tired of seeing homes taken out of the inventory of long-term rentals. They were tired of watching residential neighborhoods morph into vacation centrals. They wondered why the couple couldn’t rent their home out to a local family.

“I am against short-term rentals only because I have watched the community disappear from Kihei,” said Cody Nemet Tuivaiti, who grew up in the area. “Basically nowadays we are strangers in our own town, where before we knew everybody.”

Commissioners said they also struggled with the issue of affordable housing, but that it wasn’t up to the PenaVegas to solve Maui’s housing crisis.

“While I concur about housing, I don’t think that it is up to the individual person to provide housing for many, many, many people,” commissioner P. Denise La Costa said. “That is a county function, and they are failing miserably. When a couple or a person comes before us and they have diligently done everything — and we see many who have not — then when you follow the laws, you should be rewarded.”

Last year, the Maui County Council passed a law that would require a person to own a property for at least five years before seeking a short-term rental permit. The bill included a six-month grace period that ended in September, and the PenaVegas got their application done in August.

La Costa asked the PenaVegas if they had considered renting out the home long term.

Carlos PenaVega explained that between insurance and property taxes, it would likely cost $8,000 a month to rent, and that would only allow the couple to break even. He said if someone were able to pay that, they’d “absolutely” rent it out long term. But it’s more likely they would end up having to sell the house.

Commissioner Keaka Robinson said that while it may not be the commission’s job to create housing, members had the power to stop vacation rentals from overcrowding neighborhoods.

“I don’t get upset when I see people come, because it’s money and it’s math,” Robinson said. “If you get a house and you can rent it out, wow, you can cash in. But what it is, is a hurt, not upset, but hurt, because people are getting second homes when somebody can’t even get a room.”

Ultimately though, commissioner Kellie Pali said, denying the PenaVegas a permit wouldn’t produce the effect they were looking for — more affordable housing.

The commission, which was at bare quorum that day, needed five votes to approve the permit. It fell just short, 4-1, with Robinson opposed, prompting Chairman Lawrence Carnicelli to defer it.

“This is kind of ground zero on Maui right now,” Carnicelli said following the at-times heated discussion. “Tourism versus locals. Somehow we need to heal this. Is it going to be with one B&B or STRH application? I doubt it. But we can choose to have it drive a further wedge between us — or not.”

Commissioner Kellie Pali says that denying a permit to the PenaVegas would probably not produce the result the commission was looking for, which is more affordable housing. The Maui News COLLEEN UECHI photo

The framing for the Kahului Airport consolidated rental car facility is shown going up in July 2017. Since the completion of the project, construction work on Maui has tapered down. The Maui News / MATTHEW THAYER photo

The $340 million, 1.3 million-square-foot, four-level consolidated rental care facility is dedicated on May 14. The building, which was paid for by car rental fees, is Maui’s largest-ever public works project. The Maui News / MATTHEW THAYER photo

Alexa PenaVega (right) and husband Carlos PenaVega answer questions about their short-term rental home application before the Maui Planning Commission on May 28. The “Spy Kids” star and former Big Time Rush singer were inadvertently caught up in Maui’s housing crisis debate when testifiers spoke out against their rental permit. The Maui News COLLEEN UECHI photo