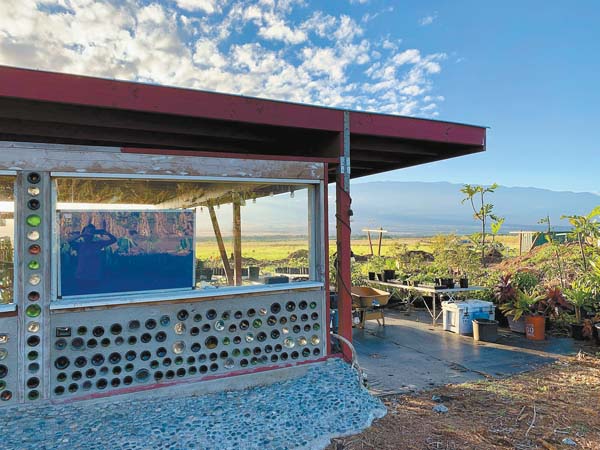 A redecorated shipping container and a wall full of glass-bottle “bricks” are the beginnings of what a group of community members hope will become a research station to help farmers transition to regenerative practices.

The unique facility, which aims to be zero waste and constructed entirely of upcycled and natural materials, is coming together on a small patch of farmland in Waikapu.

The project draws inspiration from Earthship, a concept created by architect Michael Reynolds, who started building homes in New Mexico in the 1970s using bricks of discarded steel and tin cans. The Waikapu station has a similar goal. Its main area is a 40-foot shipping container, with two walls built using 8-inch glass “bricks” — bottles cut and taped together to form cylinders. The glass bricks are stacked and lined with an adobe-cobb mix formed with sand and the clay soil at the project site.

Williams said volunteers collected glass bottles from around the community and teamed up with the Maui Huliau Foundation to get students involved in building the walls. 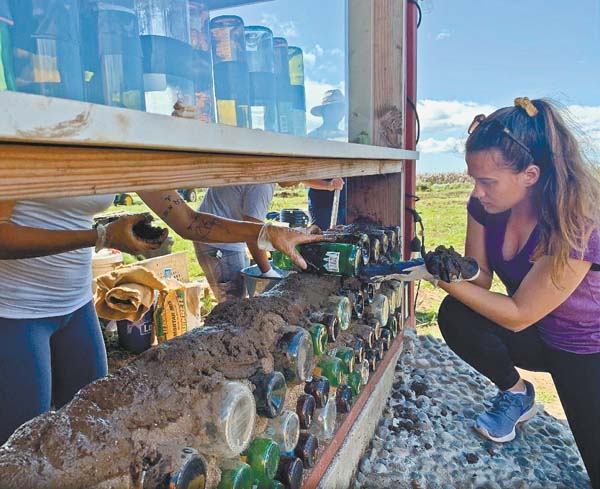 Using glass bottles for bricks and an adobe-cobb mixture for plaster, youth volunteers with the Maui Huliau Foundation work on a section of wall at La Kahea Research Station in Waikapu.

“We were having conversations about ways in which we can minimize our consumer footprint,” Williams said.

Community members have also donated excess construction materials — everything from windows to cedar planks to extra roofing materials. Volunteers from HFUU’s Farm Apprentice Mentoring Program and the Hawaii Tropical Fruit Growers also helped build a V-trellis system where mango trees will be grown to start a collection of scionwood, small twigs or branches that can be grafted onto trees to produce a certain variety of fruit. Tesla even donated a battery to store energy for the research station, Williams said.

The idea for the station sprang out of a partnership with longtime Maui farmer Bobby Pahia, who’s been working to transition his dryland kalo patches to regenerative practices.

Williams, who’s originally from Wyoming, said she was serving on the board of the Hawaii Farmers Union United’s Mauna Kahalawai Chapter with Pahia. She left to help a friend in Ohio work on an Earthship building, and the presentation she gave upon her return piqued Pahia’s interest. He explained to Williams that he hoped to have a community gathering space and would love to have an Earthship-style building down at his farm.

Pahia said he’s been been farming for about 30 years. His training and farming background were rooted in conventional practices that relied on synthetic fertilizers and pesticides. 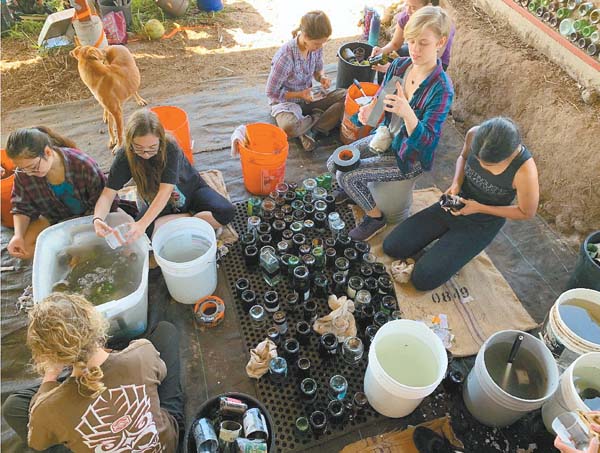 Maui Huliau Foundation volunteers piece together sections of discarded glass bottles to create “bricks” that will form the basis of the walls of La Kahea Research Station.

“About two years ago, I made a decision to stop farming that way and start using more practices that are beneficial for our soil and our environment, especially the ocean,” Pahia said. “Nitrate runoff is killing our reefs, and no reefs, no fish.”

Pahia leases about 300 acres from Maui Tropical Plantation owner Mike Atherton and subleases out to other farmers. He has about 80 acres for himself and produces at least 2 to 3 tons of kalo a month. The challenge of switching up his practices was learning how to apply regenerative techniques to a large-scale operation like his.

“How do you take these great practices and apply it to scale?” Pahia said. “Because it’s got to be economically practical. So that’s the challenge right there, because when you’re doing this kind of practice, it takes a lot more labor.”

For Pahia, the developing research station is already providing a benefit by producing compost that he can use as fertilizer for his fields.

“I’m trying to break the bonds to the fertilizer companies but at the same time maintaining integrity for the soil,” he said.

Williams, who’s been employed by Pahia for the past seven months, said she hopes the research station will become a place where farmers like Pahia can start to make the transition to regenerative practices. She pointed out that many people talk about the negative impacts of synthetic fertilizers, but oftentimes don’t realize the challenge that farmers face in changing their long-held practices that give them the yield they need.

“They need assistance and a place for the community to come together,” she said.

Williams said she wants the station be a place for nonprofits, educators, students and cultural practitioners to gather, learn or volunteer. In addition to the research facility, future plans include building an office space, greenhouse, restrooms and a barn, using as many upcycled and natural materials as possible. Williams said she’s working with CDF Engineering to get permits for the other facilities. The collective of farmers and consultants involved in the project also includes James “Kimo” Simpliciano of Simpli-Fresh Produce, who moved his operations to Waikapu after last summer’s major brush fire destroyed his crops.

The research station itself would cost $15,000 to complete, but the group is looking to raise $120,000 in total for the other facilities and the hiring of staff. For more information or to donate, visit projectsforgood.com/projects/1290/story or see the “La Kahea Research Station” Facebook or Instagram page.

Using glass bottles for bricks and an adobe-cobb mixture for plaster, youth volunteers with the Maui Huliau Foundation work on a section of wall at La Kahea Research Station in Waikapu.

Oahu’s Alex Ching clears the bunker after his approach on No. 5 plugged into the bunker. Ching and Todd Rego tied for second.

Eliot Gouveia and Eric Dugas of Makena Golf Club talk over a putt during Sunday’s final round. The defending champions finished tied for second.

Jared Sawada and Jason Jakovac congratulate each other after they completed the final round of the Kaanapali Classic Pro Pro Championship on Sunday at the Royal Kaanapali Course. Sawada and Jakovac won by two shots. KAANAPALI GOLF COURSES photos

Kihei Charter School’s Ella Schale won first place in the grade 6-8 division for this color pencil rendering of a sugar mill blended with text. Some of the featured words are: diversity, water, culture, money, curious, pain, love, family and sweet.

Giovanna Garza Motta of Maui High School won first place in the grade 9-12 division of the Alexander & Baldwin Sugar Museum “Remembering Sugar, How Sweet It Was” art contest. The painting was part of an exhibit in the museum in this photo taken May 31. The painting of Puunene Mill features an irrigation worker in the foreground. The image is a brightened and colorized update to a post card on sale in the museum gift shop. The Maui News MATTHEW THAYER photos

Maui Huliau Foundation volunteers piece together sections of discarded glass bottles to create “bricks” that will form the basis of the walls of La Kahea Research Station.