Housing panel concerned with a lack of water 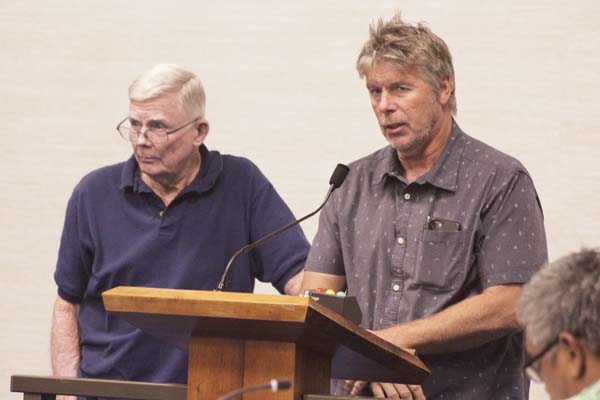 WAILUKU — Facing questions about the lack of water in Launiupoko, consultants for two proposed housing projects said Tuesday that recent shortages are due to the ongoing transition from surface to groundwater, and that wells in the area would be enough to cover the needs of the new communities.

Water was a major concern for the Maui County Council’s Affordable Housing Committee, which questioned consultants and county officials Tuesday about the two projects that would bring 96 workforce and 61 market-rate homes to Launiupoko.

Last week, dozens of testifiers opposed the projects, citing concerns over water shortages, fire risks and traffic. Supporters, meanwhile, said that affordable housing was sorely needed on the west side and could lessen traffic if workers no longer had to commute as far.

The projects are being proposed by two different entities associated with developer Peter Martin.

Kipa Centennial, of which Martin is managing partner, is proposing Polanui Gardens, which would provide 50 affordable single-family lots with a minimum 10,000 square feet, for residents earning from 80 percent ($67,040) to 140 percent ($117,320) of the area median income. The 48.9-acre development also calls for a 4.5-acre community park, a 1-acre community garden and 16 market-priced agricultural lots with a minimum 1-acre lot size. A 9.6-acre agricultural use easement would provide a farming area and buffer along the Lahaina bypass.

Meanwhile, Hope Builders, which Martin owns, is proposing Makila Rural-East, which would offer 46 affordable single-family lots, also with a minimum 10,000-square-foot lot size and also for residents earning 80 to 140 percent of area median income. The 97.6-acre development also would include four live/work units and a neighborhood store on 20,000 square feet of land, a 2-acre community park and 45 market-priced agricultural lots with a minimum 1-acre lot size.

Kipa Centennial and Hope Builders want to fast-track their projects and are also requesting district boundary amendments from agricultural to urban for the workforce housing lots.

On Tuesday, council members asked for details about the Launiupoko water situation, after hearing from testifiers about the struggle to get water for their kalo patches and the recent shortages in irrigation supply.

Glenn Tremble of Launiupoko Water Co. and Launiupoko Irrigation Co. said that the companies are moving from a longtime gravity-fed system that relied on surface water to a pumping system that draws from groundwater. In March 2018, the state Commission on Water Resource Management set stream flow standards for four West Maui streams, including the Launiupoko and Kauaula streams from which the water companies were drawing.

Tremble said that the commission expected there to be enough excess water for the companies but that it “hasn’t happened.”

“We objected to the hearing amounts that they suggested, but in effect we have to follow the law and have been releasing the water,” Tremble said. “So since that time we’ve been developing additional water sources that won’t rely on this excess.”

Tremble said that before the ruling, they were working to drill a well, LIC-1, that is now operating with two booster pumps to deliver the water through the existing neighborhood. He said it generally takes over a year to get a well online.

“You can’t change a gravity system that’s worked one way in one day and expect to have adequate source to supply this community overnight,” Tremble said.

Nance said that potable water for the projects would be covered by three existing groundwater wells, but that they would likely need a fourth well for backup.

The nonpotable irrigation system will also rely on three wells, including the already drilled and tested LIC 1 well. Developers are negotiating with a Puunoa landowner to add a second well to the system about 400 feet away. The third well, the Wainee Shaft A&B, is a 1,300-foot-long horizontal skimming tunnel that during the plantation period pumped 12 to 14 mgd, Nance said. In the final years of the plantation, it averaged 6 mgd.

“We’re going to put in two 700-gallon-a-minute pumps with a total supply capacity of 2 million gallons a day,” Nance said. “So those three wells plus the modest contribution of the Launiupoko stream will provide more than sufficient supply for the irrigation requirements.”

Tremble said there are two potable water storage tanks totaling 500,000 gallons for drinking and firefighting use in the Launiupoko area, and that another 500,000-gallon storage tank that would service the proposed projects is in the works in Makila Ridge at the 800-foot-elevation level.

Council members also were concerned about fire risks after testifiers spoke of the terrifying brush fire during Hurricane Lane in August.

Capt. Paul Haake of the Maui Fire Prevention Bureau said that hurricane-force winds were the biggest challenge for firefighters that night, in addition to overgrown brush and limited water resources. He said that if the projects go through, homeowners should create a “defensible space” of 30 to 100 feet on their properties. He also suggested that developers follow “fire-wise construction” and use noncombustible or high-rated materials for fences and roofing.

“Right now, that land is open and undeveloped and covered with brush,” Haake said. “So right now it’s a problem. I think that if the development comes in, that’s going to address some of the concerns that people have up there. A lot of that brush is going to go away, and we’re going to have people living up there and maintaining their properties.”

Council Member Tamara Paltin pointed out that having development in the area didn’t save homes during the Hurricane Lane fire. Even if the new homes were built, they still would be surrounded by plenty of brush.

“Correct,” Haake said. “But there will be less brush.”

County planning and transportation officials also said Tuesday that the two projects were not ideal for bus access, especially given the cul-de-sacs in Makila Rural-East. Council members asked developers to consider accommodating bus access, though Deputy Transportation Director Michael DuPont said that the department would need to request a budget amendment to add routes.

The meeting was recessed until 9 a.m. July 3.

With fast-track housing projects, the council has 45 days to make a decision or the project is automatically approved. The project application was submitted on June 12, and while the 45-day mark would end on July 27, the council’s deadline is July 26 because that is the date of the closest council meeting, committee staff said.

A 25-year-old man was arrested Monday after he punched a police officer who responded to a report of an assault at ...