Charges can be brought again in 7-year-old case 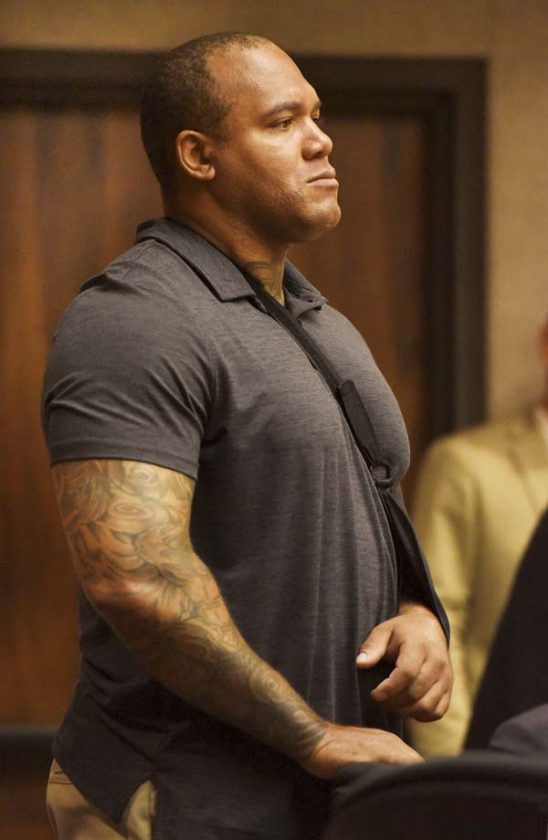 Kyle McKeown is shown in a June 28, 2018, bail hearing in Judge Richard Bissen’s courtroom. Because of a delay in bringing the case to trial, a second-degree murder charge was dismissed Wednesday against McKeown, who was indicted in connection with the death of his 4-year-old son seven years ago. The charge was dismissed without prejudice, which means prosecutors can file the charge again. -- The Maui News / MATTHEW THAYER photo

WAILUKU — Because of a delay in bringing the case to trial, a murder charge was dismissed against a man who was indicted in connection with the death of his 4-year-old son seven years ago.

The dismissal Wednesday of the second-degree murder charge against Kyle McKeown was without prejudice, so the prosecution can file the charge again.

McKeown, 39, and his then-live-in girlfriend, Grace Lee-Nakamoto, 34, were arrested after they took his unresponsive son Zion McKeown to the Maui Memorial Medical Center emergency room at 10:55 p.m. May 29, 2012. The boy was pronounced dead at 4:30 a.m. the next day, with an autopsy showing he died of blunt force trauma to his lower abdomen, according to police.

McKeown had been in jail, unable to post bail, for more than five years while awaiting trial before he was released in April 2018 after the prosecution asked that the case be dismissed without prejudice pending further investigation.

The following month, a Maui County grand jury returned a new indictment charging McKeown and Lee-Nakamoto with causing Zion’s death by inflicting injury on him or by failing to seek timely medical attention for him from May 21 to 29, 2012.

Both McKeown and Lee-Nakamoto were released on supervision after being reindicted.

A trial had been set to begin May 20 in 2nd Circuit Court before the defense asked that the case be dismissed because of the delay.

“It’s been a year — half of which is caused by the unilateral actions of the state, while Mr. McKeown was wanting his right to a trial,” defense attorney Matthew Nardi said in court Wednesday.

In arguing for a dismissal with prejudice, Nardi said McKeown was prejudiced by a change in the prosecution’s theory of the case that was reflected in the second indictment alleging that McKeown failed to seek timely medical attention for his son.

“That made all the more important what happened in the days leading up to the boy’s death,” Nardi said. “I’m trying to gather evidence, most of which doesn’t exist anymore.”

He said evidence about the days before the boy’s death wasn’t so relevant when the prosecution alleged that the blow that caused Zion’s death occurred the night he was taken to the hospital.

“All along, the state has maintained that it was the defendant that caused those injuries,” Rivera said. “The thing that did change is when they were caused. Based on the state’s additional forensic evidence, the injuries would have been caused up to seven days before.

“The theory is not that somebody else beat this child to death. It would be ludicrous to say someone else caused the injury that led to his death.”

Under Rule 48 of the Hawaii Rules of Penal Procedure, a case can be dismissed by the court if trial doesn’t begin within six months or 180 days. Some periods are excluded from the calculation of the six months, including when the defendant waives the time and agrees to a delay.

Rivera said there had been a delay of over 2,544 days in bringing McKeown’s case to trial. But only about six months of the delay couldn’t be excluded, Rivera said. “That shows that the parties have been agreeing and working with each other to continue the case to accommodate each other,” he said.

Judge Richard Bissen, who has presided over the case since 2012, said two main reasons for delays were to accommodate experts, some of whom weren’t going to be available for six months, and to allow for a change in attorneys for McKeown.

“The attorneys were very much in agreement in whatever delays were occurring,” Bissen said.

Nardi is the fourth attorney appointed by the court to represent McKeown, after his previous court-appointed attorneys withdrew from the case. Nardi said McKeown wasn’t responsible for the withdrawal of his prior attorneys, which occurred for various reasons.

In ruling that the dismissal be without prejudice, Judge Bissen said the court balanced all factors, including the length of the delay and reasons for the delay.

“This is the most serious of offenses that can be charged in our state,” Bissen said. “That factor does weigh in favor of the state.”

He said he hadn’t seen a delay in the turning over of documents to the defense.

“The parties seemed to be in agreement with the pace at which the trial was proceeding,” Bissen said.

The case against Lee-Nakamoto is pending, according to court records.