Parks final proposal may be reviewed at Thursday meeting 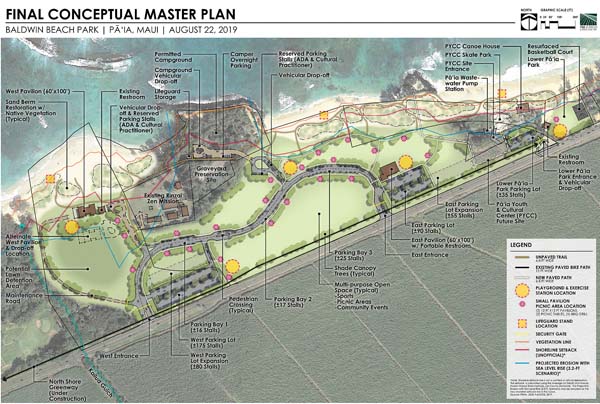 This is the final master plan for the Baldwin Beach Park in Paia, drawn up after open houses and consultation with a 12-member advisory committee of local residents by the county Department of Parks and Recreation. No master plan has ever been done for the park, one of the largest in the county. In addition, it provides a plan for 29 acres the county obtained from Alexander & Baldwin when it purchased land in the Maui Business Park for the new service center. -- Courtesy of the county Department of Parks and Recreation

Moving the current pavilion inland, building another pavilion on the east end, installing a new roadway with a second entrance to Hana Highway and adding parking are part of the final concept for the Baldwin Beach Park master plan in Paia.

The Department of Parks and Recreation master plan will be available for public viewing from 4:30 to 7 p.m. Thursday at Paia Community Center.

The 56-acre park is one of the largest beach parks in the county system and is one of three major parks along Maui’s north shore that attract high levels of use, the county Parks and Recreation Department said in a news release.

“It’s such a wonderful park site,” said planner David Yamashita on Wednesday. It is one of the larger park sites “in proximity to Maui residents”

The park, which has never had a master plan, includes a considerable amount of undeveloped land — including 29 acres obtained from Alexander & Baldwin in the Maui Business Park service center transaction in 2014 — that can be used for recreational purposes. 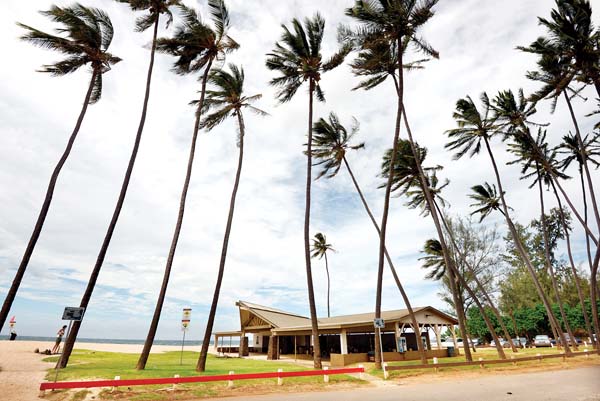 The final concept for the Baldwin Beach Park master plan in Paia will be available for public viewing from 4:30 to 7 p.m. Thursday at the Paia Community Center. The Department of Parks and Recreation said there has never been a master plan for the 56-acre park, one of the largest county parks. -- The Maui News / MATTHEW THAYER photo

The plan addresses the kinds of activities and facilities needed for residents, how to address sea level rise with the erosion of the beach, parking and managing overall park use.

Yamashita said that there are not many fixed structures planned in the zone 3.2 feet above sea level along the shoreline. The plan does not address the homeless problem in the park area. That is a “management issue,” he said.

The plans also include a possible retention basin in the open field along the current road to the shoreline; the park often floods during heavy rainstorms.

The proposed roadway will wind west off the current access through the newly added lands with a second east entrance between the Paia Youth & Cultural Center and the current entrance. There also will be a new spur going makai to a cul-de-sac next to the Rinzai Zen Mission.

There also will be two parking lots along Hana Highway, camping areas, multiple playground and exercise facilities and sand berm restoration along the shoreline of the west end. The two pavilions each are planned for 6,000 square feet. 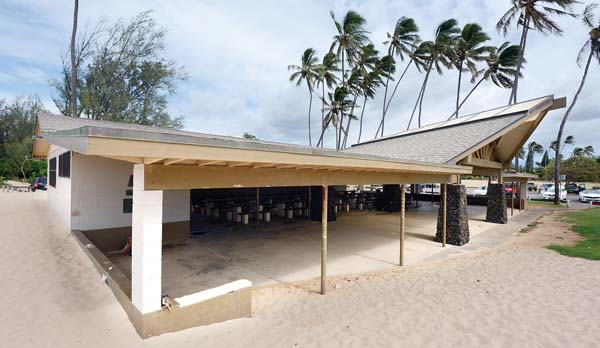 The final version of the Baldwin Beach Park master plan calls for pavilions on the west and east sides of the park. A county planner said the current pavilion on the west end may be moved inland. -- The Maui News / MATTHEW THAYER photo

After the third and final open house, the department will use the master plan as a foundation for improvements at the park and for more detailed studies “to review and refine the concept,” said Yamashita. While the master plan will be presented to the council, no formal approval will be necessary.

“It’s very exciting to see a final concept which provides a foundation for the future,” said parks Director Karla Peters. “There’s still more work to be done, but we’ve taken the first step.

“I want to also acknowledge the work of the advisory committee because their ideas and experience were so helpful in getting us to this point.”

The final concept was derived based on information gathered at the open houses and guidance from the 12-member advisory committee made up of local residents, Yamashita said. The first open house was a listening session, held “even before pencil was put to paper.” The second open house offered a review of options with the third gathering to present the preferred concept, based on the committee input and the open houses.

The final master plan concept will be shown at the open house, along with other supporting materials. During the open house, there will be opportunities for participants to express their thoughts and to speak directly to the consultant team and to parks staff. 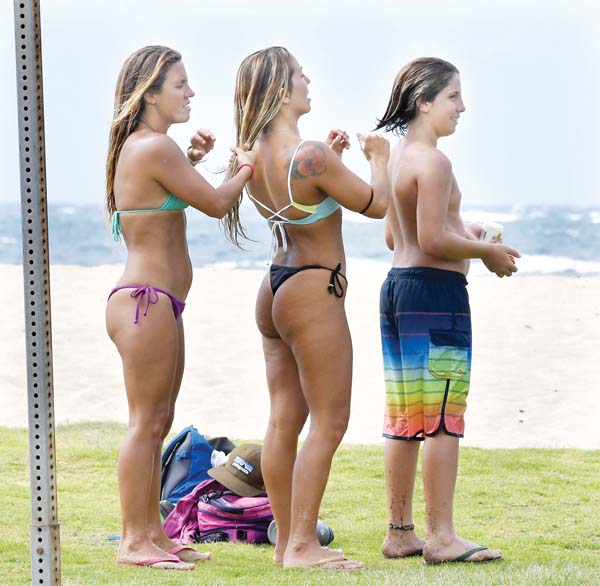 Maria Carla Dandi untangles sister Renati Dandi’s hair while she does the same for her son Silvestre Dandi on Thursday afternoon at Baldwin Beach Park. They are visiting from Argentina. A master plan for the park, one of the largest county beach parks, is being developed, which will take into account sea level rise. -- The Maui News / MATTHEW THAYER photo

People may drop in anytime during the open house at the center located at 252 Hana Highway.

For more information, contact Yamashita by phone at 270-6508 or by email at david.yamashita@mauicounty.gov.