Kamehameha Maui’s Makani Smith-Kemfort goes up for a pass in front of King Kekaulike’s Seth Myer Fernandez in the second quarter. — THE MAUI NEWS photo 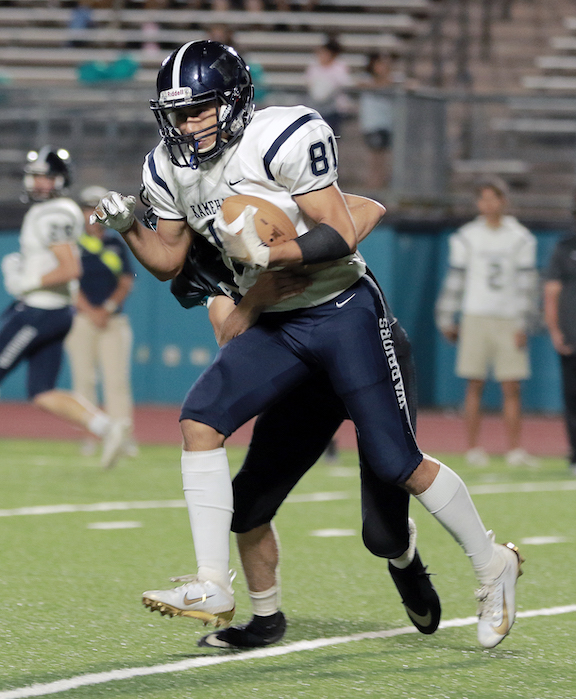 PUKALANI — Tiliti Adams knew that his Kamehameha Schools Maui football team was in for a battle at King Kekaulike Stadium on Saturday night.

Adams accounted for five touchdowns — four scoring passes and one run — to lead the Warriors to a 34-18 win over their cross-the-street rivals on homecoming night for Na Alii.

The victory was the 10th straight for Kamehameha Maui in the Upcountry rivalry. King Kekaulike has two wins this season — nonleague over McKinley and last week in a Maui Interscholastic League contest over Maui High. Before that, Na Alii had not won a football game since 2014.

“Hats off to King K, they’re up there, they’re getting up there,” Adams said. “They always have something to prove when they battle us.”

Adams finished 9-for-23 passing for 224 yards and touchdowns of 30 yards to C.J. Hamasaki, 41 and 9 yards to Ezekiel Weber, and 42 yards to Makani Smith-Kemfort. Adams ran six times for 3 net yards and a 6-yard score. 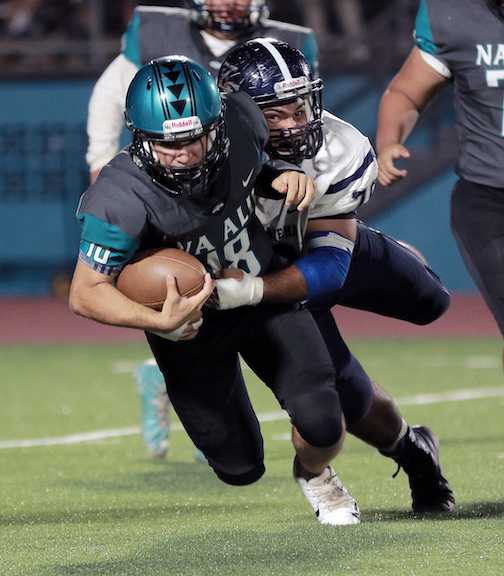 Kamehameha Maui pushed the lead to 20-6 when Adams found a wide-open Smith-Kemfort for the 42-yard touchdown pass with 6 minutes, 36 seconds left in the third quarter.

Na Alii closed within 20-12 with 10:58 left in the game when Franco Melgar Martich hit Trey Hunter for a 36-yard touchdown pass, the second scoring strike between the two in the game.

Adams ran for a 6-yard score with 6:39 to go to make it 27-12. That possession was set up by an interception and 20-yard return by Kapena Gushiken. A 15-yard penalty on Na Alii on the play allowed the drive to start at the King Kekaulike 24-yard line.

On the first play of the drive, a Na Alii player was called for a personal foul and ejected, moving the ball to the 12.

Na Alii got back within 27-18 on a 25-yard scoring pass from Melgar Martich to Hunter. The play before that, Hunter made an acrobatic 33-yard grab. 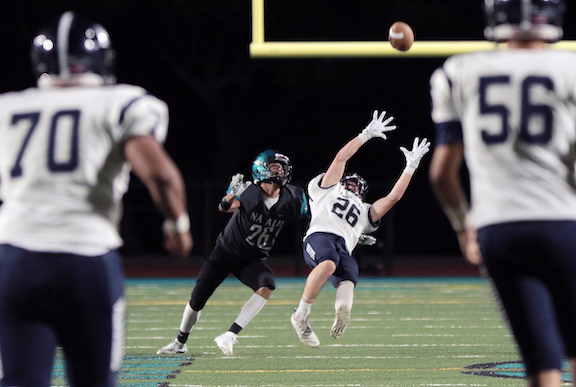 Kamehameha Maui’s Makani Smith-Kemfort goes up for a pass in front of King Kekaulike’s Seth Myer Fernandez in the second quarter. -- THE MAUI NEWS photo

The final score came on a 9-yard touchdown pass from Adams to Weber with 1:35 to play.

Hunter finished with four catches for 149 yards and three touchdowns, and three rushes for 27 yards. He was also 1-for-1 passing for 43 yards.

The Warriors took a 14-6 lead into the locker rooms for halftime on two long touchdown passes by Adams.

The first was a 30-yard dart to Hamasaki to put Kamehameha Maui ahead 7-0 with 6:22 left in the first quarter. That play capped a four-play, 35-yard drive that started with a 47-yard punt return by Gushiken.

Na Alii answered on the first play of the second quarter when Melgar Martich threw a swing pass to Hunter, who split the defenders and rumbled 55 yards for the touchdown to bring Na Alii within 7-6.

After a penalty on the kickoff pinned the Warriors on their own 3-yard line, they went 97 yards in seven plays and pushed the lead to 14-6 on a 41-yard Adams pass to a wide-open Weber. The drive was helped by two penalties on Na Alii for a total of 20 yards.

Weber caught five passes for 86 yards for two touchdowns, Smith-Kemfort caught four balls for 112 yards and the touchdown, and Teva Pimentel ran 21 times for 130 yards to lead the Warriors’ offense, but Adams felt it could have been better.

“To be honest, I was very disappointed in our whole team, especially the offense,” Adams said. “We wanted to move the ball way better.”

Kamehameha Maui coach Ulima Afoa said his team (2-2) will use its upcoming bye week to prepare for the second round of MIL play. He had a better evaluation of the Warriors’ offense than Adams did.

“They did a nice job, they kept the ball moving,” Afoa said of his offense. “You want to get to the point where you don’t have some of those things that stop you in these games. We still have a little bit of that that we have to work through, so it’s a good thing that we’re going into a bye week.”

King Kekaulike coach Tyson Valle said his team is over the five-year losing streak and ready to challenge for bigger things.

“Basically I think both sides of the ball everybody came out to play tonight,” Valle said. “We had an exciting game tonight. Unfortunately we made more mistakes, Kamehameha capitalized on them and we have to make sure we don’t do that again.”