Repairs from the disturbance at MCCC are almost complete 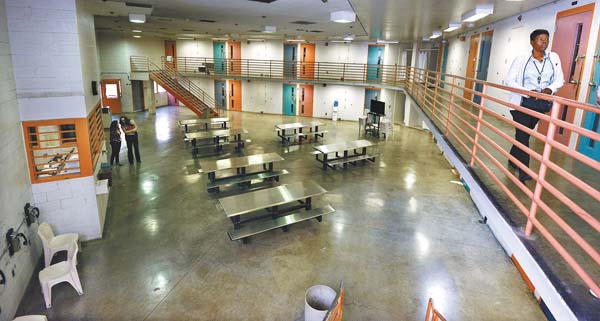 Maui Community Correctional Center Warden Deborah Taylor walks along cells on a second level of Module A, which also suffered some damages from the March riots. The most severely damaged was Module B. The Maui News/MATTHEW THAYER photos

WAILUKU — Eighteen inmates were found guilty through an administrative process for the fire and riot that broke out March 11 at the Maui Community Correctional Center, according to a spokeswoman from the state Department of Public Safety.

Those found guilty in relation to the fire were assessed $1,358 each and those guilty for both the fire and riot were assessed $2,716, department spokeswoman Toni Schwartz said in an email last week.

In the riot on March 11, inmates caused millions of dollars in damages, setting fires, tearing nonworking phones off the walls and ransacking cells, among other damages. Jail staff and inmates both said they feared for their lives as fights broke out, smoke filled the modules and flooding occurred.

The inmates were sanctioned and were assessed monetary penalties, under what is allowed in the Corrections Administration Policy and Procedures regarding misconduct violations.

Funds collected by the offenders will be deposited in the state general fund, Schwartz said. 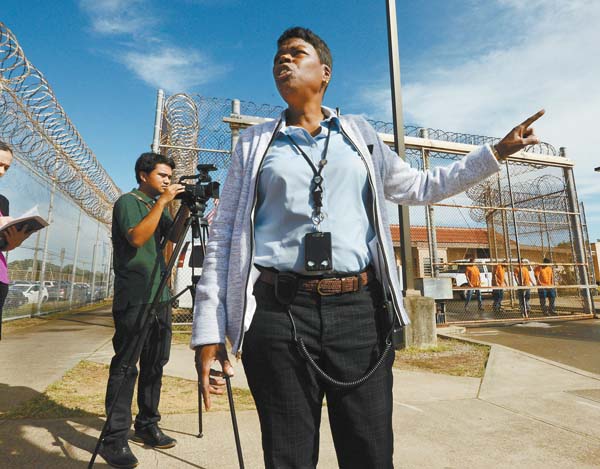 “The next step in the process will be to review the administration/internal investigation findings and consider all of the possible criminal charges that can be filed,” Schwartz said.

She added that the 18 inmates were moved from MCCC early on and taken to Halawa Correctional Facility on Oahu.

“This allowed for the restoration of routine operations and the expediting of the internal investigative and adjustment hearing process,” she said.

Eight months after the riot, which began after inmates in Module B refused to go back to their cells after a conversation over broken phones, the Public Safety Department continues to work on a final report about the incident. 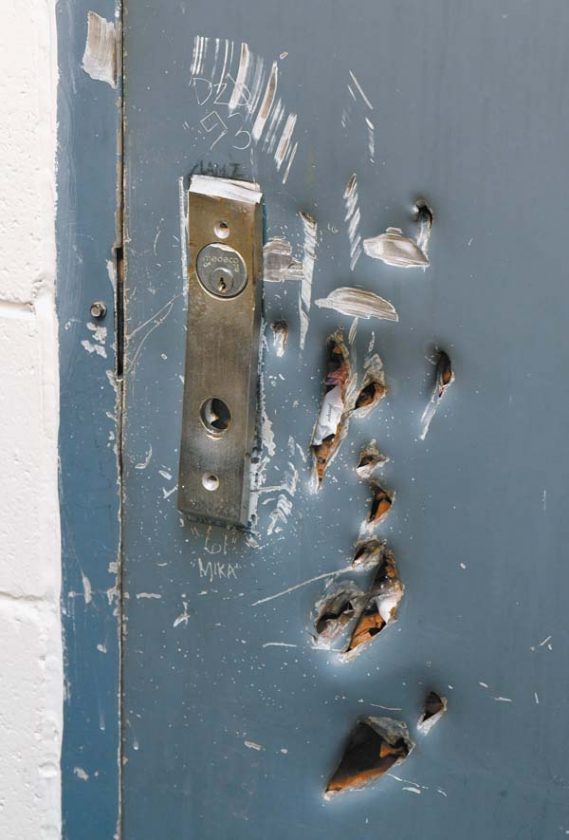 Multiple punctures and dents are still visible in a metal door in Module B, which suffered the most damage in the March riots.

Schwartz did not give a target date on when the report would be completed.

But at a state Senate joint informational committee meeting on Maui in August, State Department of Public Safety Director Nolan Espinda said the report would be completed in the “very, very, near future.”

On Tuesday, during a periodic media tour of the facility, which the department is also conducting at other jails across the state, MCCC officials showed the media Modules A and B, which were damaged in the riots.

Schwartz said in a email last week that most repairs have been completed. But a permanent fix to locking mechanisms for cells are in the process of being replaced.

Overall, the funding for the immediate repairs is coming from a $5.1 million emergency appropriation for fiscal year 2019, Schwartz said. 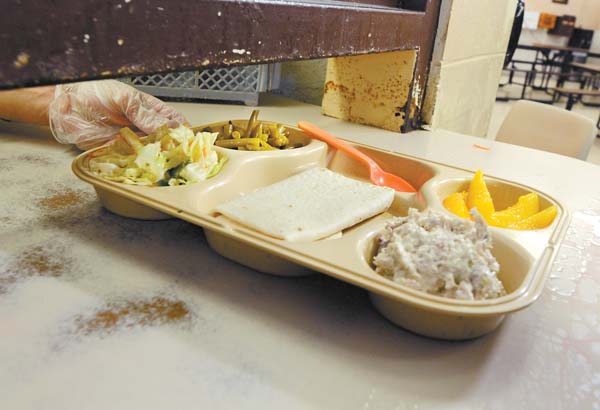 Inmates have complained about the type and amount of food they are served. This was Tuesday’s lunch at Maui Community Correctional Center.

On Tuesday in Module B, which sustained the most significant damage, multiple puncture marks and dents could still be seen in a metal door for a storage area, and some ceiling panels were brown.

But phones that were ripped off the walls in the incident were back up, and walls have been repainted.

In March, inmates broke fire sprinklers and started a small fire in the common area using toiletries that they obtained by breaking into a storage area in the module. The storage areas have been sealed off, state DPS officials have said previously.

Another riot broke out in Module A, which suffered less damages.

Schwartz on Tuesday pointed to how walls in Module A have been repainted near a doorway where the flames burned to the ceiling. But some discoloration can still be seen on some ceiling panels. 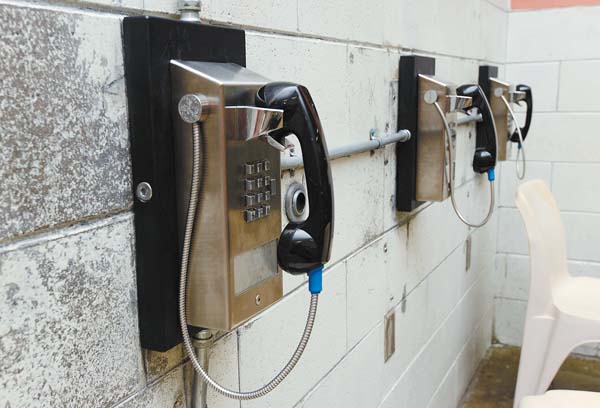 Phones that were ripped off the walls in Module B in the March riots have been restored. In March the phones were not functioning, which upset inmates who later said that was one of the reasons for the riots.

“It was all black before,” Schwartz said of the walls.

She added that a door that inmates tried to burn and break in an attempt to escape has been replaced.

Warden Deborah Taylor said that now dining tables used in the module are bolted down to the floor, since inmates pushed the tables around during the riot.

Currently 11 out of 12 inmate living units are equipped with closed circuit television or video surveillance, Schwartz said in an email prior to the tour. Upon completion of a capital improvement project, all 12 living units will be upgraded.

Another module that was not involved in the riot has a multiscreen video surveillance display in the control box for the adult corrections officers. A similar configuration will also be done for Modules A and B.

Taylor said the work on the security measures had already been in progress prior to when the riots occurred.

Before the riot, the jail did have security cameras in the common areas outside of the housing modules, Schwartz said in her email.

As the media toured the modules, inmates periodically banged the doors and yelled.

One inmate yelled, “We f—— overcrowded.” Another one said, “We are being held hostage.”

Some inmates in the women’s dorms suggested out loud that media take photographs of the lunches, while one male inmate suggested looking into a cell that housed four inmates.

Both the Public Safety Department and inmates cited overcrowding at the jail as one of the catalysts for the March incident. There have also been complaints about the food and changes to the commissary order process for goods that inmates can buy. Both the department and inmates say a conversation between inmates and jail officials over broken phones took place before the riot.

As of Monday, there were 422 inmates at MCCC, which has an operating capacity of 301 inmates. The jail is over capacity by 40 percent.

On Tuesday, private contractors were working on renovating dorms and other capital improvement projects.

A new 80-bed housing unit is also in the works for the jail. The project is currently in the design phase.

However, the $7.5 million appropriated for the project only allows for 32 beds at this time, Schwartz said.

The new, roughly 20,000-square-foot unit would add two buildings for inmate housing, medical facilities and building services near the center of the existing 7.23-acre site along Waiale Road, according to the draft environmental assessment released in May.

MCCC houses pretrial detainees, inmates on short-term sentences and prison inmates nearing their release, according to the department. It also houses inmates participating in the Maui Drug Court program.

In addition to overcrowding issues, the jail is dealing with a lack of adult corrections officers and has continuous recruitment for those positions.

In the past and as recently as Saturday, visititation has been canceled at the jail because of staffing shortages.

In the August joint Senate committee informational meeting that was held on Maui, Espinda noted that MCCC has 167 adult correctional officer positions, with 36 vacancies. But there are 22 officers on workers’ compensation or authorized leave and 55 others granted federal family and medical leave. That leaves a total shortage of 113 positions and corrections officers on leave.

**This story contains a correction from its original version published on Nov. 20, 2019.