Public workshop to be held later this month 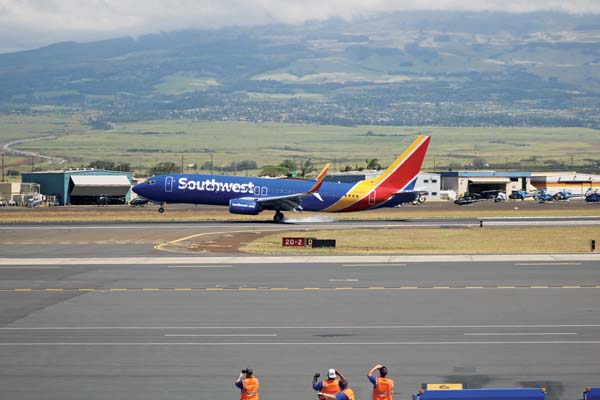 A Southwest Airlines flight skids to a stop on the Kahului Airport runway in April. The state Department of Transportation is seeking public input on plans to reconstruct the airport’s main runway, which needs a full replacement of its deteriorated base to prevent recurring cracking. The Maui News / COLLEEN UECHI photo

The state Department of Transportation is seeking public input on its longtime plans to reconstruct the Kahului Airport’s main runway, which needs a full replacement to prevent recurring cracking.

The department, which is preparing an environmental assessment for the project, will hold a public scoping workshop from 5:30 to 7:30 p.m. Nov. 20 at the Maui Arts & Cultural Center in Kahului. The meeting will provide an opportunity for the public to comment on the proposed action, its need, alternatives and potential environmental effects.

The proposed reconstruction would “entail a full depth replacement,” not just paving over the existing runway, but it also would “allow for the reconstruction of the runway to occur while OGG maintains all operations,” according to a public notice for the workshop.

Previous resurfacing projects have extended the runway pavement’s useful life, but it did not address the deteriorated sub-base that is the source of recurring surface cracking, according to the notice. Runway 2-20 was built in 1942 and last underwent repairs in May 2015 at a cost of $5 million, said Tim Sakahara, a spokesman for the state Department of Transportation. He said the current runway pavement strength is projected to last until 2023.

Kahului Airport is the second busiest in the state after the Daniel K. Inouye International Airport in Honolulu, which recorded 21.2 million enplaning and deplaning passengers in fiscal year 2018 (the latest report available on the department’s website), followed by the Kahului Airport at 7.3 million passengers. The Ellison Onizuka Kona International Airport was third with 3.8 million passengers.

An environmental assessment for the reconstruction of the main runway at the Kahului Airport is scheduled to be completed in 2020. The necessary permitting process could take up to six months after the completion of the EA, Sakahara added. He did not have a date for when reconstruction work could begin.

Although it’s too early to determine the project’s exact cost, Sakahara said the department is budgeting $250 million for the entire project.

The costs include “enabling projects” that must be completed prior to the actual reconstruction.

These projects include relocating existing tenants and converting an existing taxiway to serve as a temporary runway while reconstruction work is ongoing.

Another project would involve moving back relocated tenants to their original locations when runway work is complete, Sakahara said.

The project does not include extension of the runway, which is part of a bigger master plan for Kahului Airport. The master plan calls for extending the main runway from 6,995 to 8,530 feet; planning for a new 7,000-foot-long runway on the Haleakala side of helicopter, tour and other general aviation facilities; and expansion and improvements to the terminal.

On Tuesday, department officials appeared before the Urban Design Review Board on Maui to discuss plans for a $36 million Kahului Airport terminal improvement project that will include enclosing the open air southern concourse and adding about 400 more seats for waiting travelers.

Members of the public can submit comments on the proposed runway reconstruction before and after the upcoming public scoping workshop. Comments may be submitted in writing and must be postmarked by Dec. 23.

Comments may also be submitted electronically via email to: herman.tuiolosega@hawaii.gov also by Dec. 23.

Comments received during the public scoping comment period as well as comments received during a similar scoping workshop for regulatory agencies may provide additional input into the development of the draft environmental assessment, the notice said. The draft EA is required per federal and state regulations.