First phase of the exhibit planned to debut in March 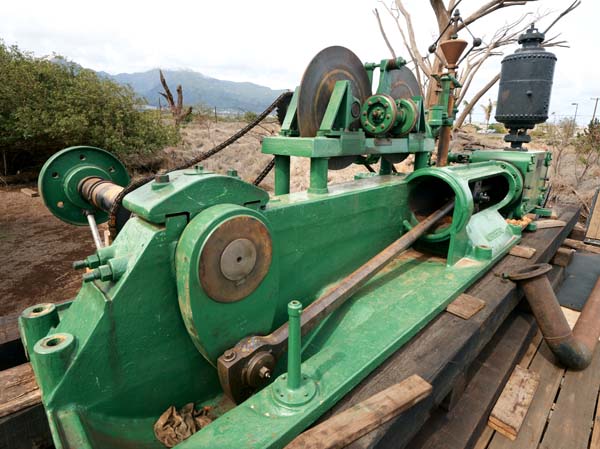 One of the latest additions to the museum is this 250-horsepower steam engine that was operated at Kahuku Sugar Mill on Oahu from 1896 until its closure in 1971. -- The Maui News / MATTHEW THAYER photo

PUUNENE – The Alexander & Baldwin Sugar Museum has acquired two Nordberg steam engines and hopes to have one ready to display in a new outdoor exhibit by next March, museum director Holly Buland confirmed on Wednesday.

While smoke no longer rises from the Puunene Mill after its shutdown in 2016, the Sugar Museum across the street lives on, sharing the history of how sugar production grew and shaped Hawaii.

“The history of sugar on Maui is important to preserve,” the museum’s board of directors said in a press release Monday. “With the addition of these two exhibits, and plans to use our expanded lease lands, the Sugar Museum will be able to offer more displays and educational opportunities to Maui’s residents and visitors.”

Nordberg steam engines, which had powered massive cane crushers, pumps and other equipment in the sugar mills, were purchased “for a dollar deal” from the Kula estate of Laurence “Baron” Dorcy in 2013, Buland added. Dismantling and transporting the machines to the Sugar Museum’s garage was a large expense, but the costs were cushioned by grants.

Buland said that the museum is thankful for “the Laurence H. Dorcy Hawaiian Foundation for the generous granting of funds for the project,” and also appreciative of the support from David Christophersen, Tiare Christophersen, Bob Taylor, David Barrett, Robert Manssen, Theo Sniffen of T. Sniffen & Sons LLC, Aika Gushiken and Makaio Kamalii of Diversified Crane. 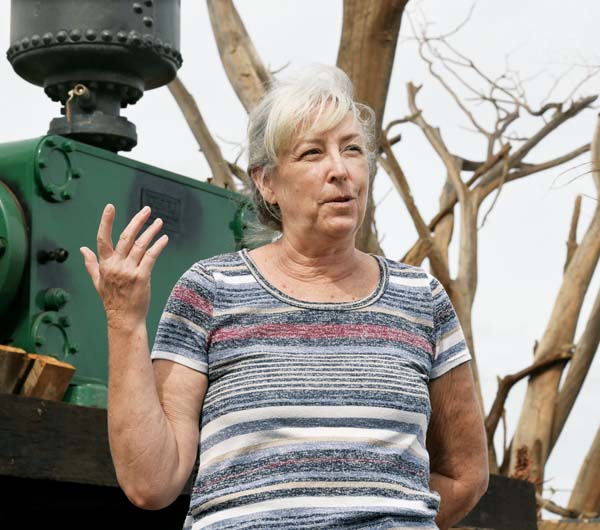 While walking through the museum’s outdoor exhibits, Buland was excited to announce that the museum has recently completed the first phase of its steam engine exhibit by installing the smaller engine, which is still capable of 250 horsepower but will not be turned on.

The engine previously operated at the Kahuku Sugar Mill on Oahu from 1896 until its closure in 1971.

“It’s possible that we may be able to get it started in the future, but I think we would have to pour about nine feet of concrete into the ground just to stabilize the flywheel,” she said. “But I don’t think it’s going to happen, but the project is very exciting.”

Last month, the pieces of the larger engine were moved from the old millyard to museum property, and other outdoor exhibits were rearranged to make room for the smaller engine.

For the second phase of the exhibit, Buland said that they plan to attach the estimated 8-foot-tall flywheel to the smaller engine and move it to its new display location, with hopes of completing the project by March. Meanwhile, assembly of the dismantled larger engine will begin as well.

The 1,800-square-foot museum, which is located at 3957 Hansen Road in Puunene and was once a former mill superintendent’s home, opened in January 1987 and operated on a month-to-month lease from Alexander & Baldwin. In July 2017, the museum signed a 30-year lease with A&B that expanded the museum property to about 4 to 5 acres, Buland said.

Two full-time and five part-time employees currently work in the building, which consists of six rooms that display artifacts, photos, audio-visual presentations and authentic scale models, including a mini electric model of a steam engine in action.

Roslyn Lightfoot, longtime director of the museum, retired on June 30 and passed the torch to Buland, who has been with the museum since 2009 as operations director and recently as assistant director.

“I’ve been enjoying it, but there’s a lot to do. It’s been very challenging for me,” she said of her new role. “I’ve never been in this position to that capacity, so it’s kind of like a whole new job, learning things I didn’t know before. . . . It’s been a big step, and the museum has a lot going on, and it’s going to be exciting to work through all that with the board to get it all going.”

The museum is an independent nonprofit that has been strongly supported by A&B and Hawaiian Commercial & Sugar Co., said Buland; however, much of their annual revenue (which the board declined to disclose) is reliant on admissions and gift shop sales.

Donations and foundation grants largely fund school programs and special projects, such as the steam engine exhibit, but “vary depending on the project,” she said.

“It’s been slow ever since the mill closed. We have definitely noticed a downturn in visitors, and we’re trying to work on that,” she said. “We didn’t really know how it was going to affect us, but we’ve been realizing how the mill itself has been an attraction, and we’re right there, so it was a natural thing for people to say ‘what’s that’ and then maybe come to the museum.”

HC&S also used to provide power, water and the occasional maintenance at no charge, but since its shutdown in 2016, the museum has had to come up with those additional costs.

Other reasons for the decline could be from the rash of fires over the 2018-19 season and having to close the museum’s doors “more times then we ever have,” Buland said.

But recent new additions to the museum show hopes for a bright future.

The Sugar Museum acquired a third-generation Tournahauler, the last on the island, after a Maui resident bought the specially modified cane-hauling machine during HC&S’ closing auction last year.

“He told us that he wanted to save it but had nowhere to put it,” Buland said.

As an ongoing fundraiser, A&B also recently donated a book to the gift shop titled “Cane: Hawaii’s Last Sugar Harvest,” which discusses the year when HC&S ceased operations on the 36,000-acre sugar plantation on Maui. Buland said that readers can purchase the book to learn about its history and the plantation workers who experienced the daily activities and the shutdown firsthand.

The room for the gift shop, originally the plantation homeowner’s kitchen, was recently remodeled, Buland said, which was a goal that former director Lightfoot had mentioned accomplishing before she left.

Another long-term project is to build another small exhibit that will house the Claus locomotive and Kalakaua coach car that are currently on loan to the Maui Tropical Plantation.

She had no cost estimates or timeline yet for the project, but as the museum expands it will seek more funding through grants and donations.

Buland welcomes visitors and residents to come view the exhibits and check out the museum any day of the week from 9:30 a.m. to 4 p.m.

“Because we’re sort of located off the beaten track, we need signage more than ever,” she said, suggesting that they put a larger sign or object on Puunene Avenue or Hansen Road, as well as finding places to advertise to the right audience to let the community know that “we are here.”

“They can learn all about Maui’s history here,” she said.

To learn more about the exhibits, volunteer and educational programs, or how to donate, visit sugarmuseum.com.