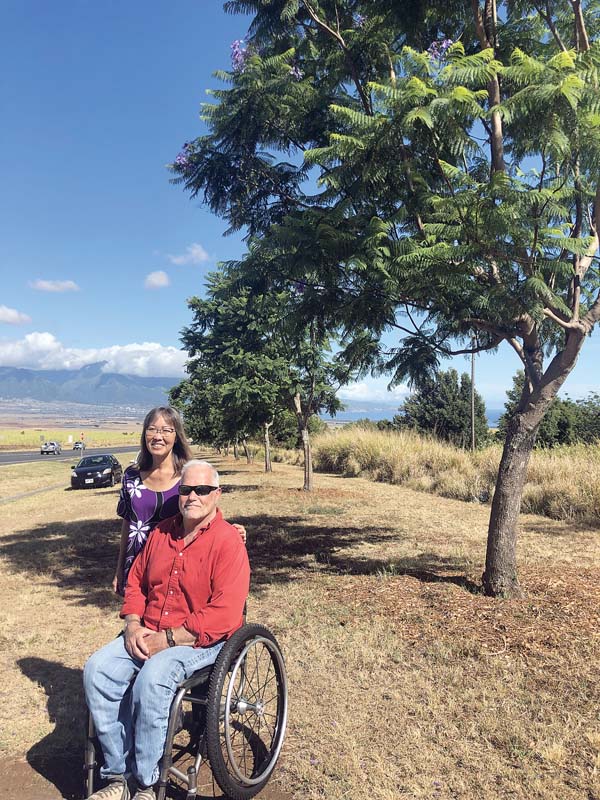 Dr. Peter Galpin smiles with wife Nina Sato along Haleakala Highway by the jacaranda trees that son Aki helped plant about a decade ago. Galpin retired Tuesday and moved to Canada to live closer to his children. Photo courtesy of Yuki Lei Sugimura

Dr. Peter Galpin is ready to begin an “exciting new chapter” in a life that has already been an eventful book.

After 25 notable years with Maui Memorial Medical Center and at his private office in Kahului, the 68-year-old Galpin has retired from his duties as a plastic and reconstructive surgeon — the only surgeon in the world to begin and complete his medical and surgical training from a wheelchair, according to the Disaster Medical Coordination International Society, where Galpin served on the board.

“It really has been really gratifying that people have been taking time out of their busy schedules just to say goodbye,” Galpin said while cleaning out his office and finalizing travel plans Wednesday.

Galpin and his wife, Nina Sato, left for Canada Wednesday night to live closer to their twins, Aki and Mikiko, who were raised on Maui but moved to Vancouver to pursue their careers.

Over the past 25 years, Galpin became a highly respected health care specialist and also filled roles as the vice president of the Maui County Medical Society and of the Hawaii Independent Physicians Association. 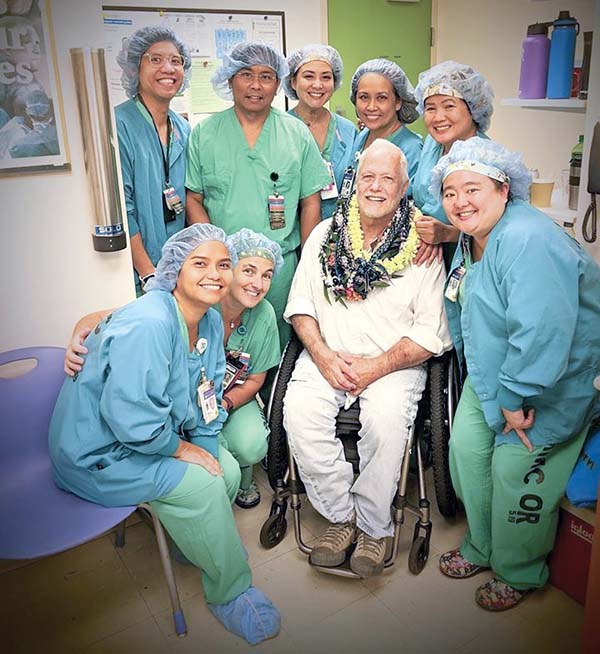 He also picked up notoriety for his shark attack-related surgeries — averaging one a year — and the nickname the “shark doctor.”

After completing his first shark bite surgery around 1994-95, and then a few more, Galpin became the “go-to guy.”

“The reason for that is for the way Maui is situated,” he said. “The ecosystem can support sharks and at the same time, there is only one hospital here. So there’s certainly many places in the world that get many more shark attacks than we do, like Australia, Florida, places like that, but I guess it’s the fact that they are kind of concentrated here.”

Galpin’s passion for helping people came from his experience in the Vietnam War, according to past Maui News stories. He had trained with the Army as a special forces weapons expert and medic, and helped run the medical evacuation of approximately 40,000 people.

However, while he was pursuing his studies at San Francisco State University, a drunken driver slammed into Galpin’s motorcycle, leaving him paralyzed from the waist down.

After about eight months of recovery, Galpin was determined to finish college and enroll in Wayne State University School of Medicine in Detroit.

He also continued to serve medical missions in Afghanistan and Laos.

In 2006, the U.S. Department of Health and Human Services honored Galpin with the Secretary’s Highest Recognition Award for his “sustained excellence” and “distinguished service” in local, national and international medical care.

Being involved in the community and with his children is very important, he said Wednesday, which is why some have known Galpin as the scoutmaster for Kula Troop 14 Boy Scouts, a Little League baseball and soccer coach, and a gardener tending to the jacaranda trees along Haleakala Highway that were planted as part of an Eagle Scout project organized by his son Aki.

“Being a parent is the most amazing adventure that I’ve ever had in my life, and I’m sure every parent feels this way, but I look at my kids and I’m totally amazed by them,” he said. “So as they matured, and like most kids, they move on with their lives.”

Every time that Galpin drove down from his residence in Keokea by the row of maturing jacaranda trees, he would be reminded of that chapter in his life, and “think about him and wonder how he’s doing.”

“It was a very nice experience because every time I drive by, I can remember planting them,” he said.

Choosing retirement was inspired by a combination of things, he said, including his wife’s decision that it was a good time for her to transition away from her role as school director of Carden Academy.

Sato taught at the academy from 1999 through 2008, and eventually became the English language arts specialist for the middle school prior to filling the head of school position.

“She felt that the school was in a good, stable place. . . . Time was sort of the genesis of her and I to make this decision,” Galpin said. “Surgery also requires a significant amount of hand-eye skill and coordination, all that kind of stuff, and so I guess I wanted to go out while I was still at the top of my game.”

As of now, Galpin and Sato do not have plans for retirement, other than settling in their new home and enjoying the “exciting new adventure, new chapter.”

“I hope opportunities may present themselves, and for me, I hope I’ll find something interesting to do, but no absolute plans right now,” he said. “I got a sailboat up there, so I’ll sail when the weather is good and I’ll ski in the wintertime.”

Moving to Canada will be “fun for us, but the kids might have a different view of it,” Galpin said with a laugh.

With the only hand specialist in the Valley Isle leaving the state, Galpin assured the Maui community that they shouldn’t worry.

“It routinely ranked incredibly high on national platforms, and so the fact that I’m moving on is not going to change anything, so there’s a bunch of good guys and gals up there,” he added.