More than 1,000 participate in annual event in Kahului 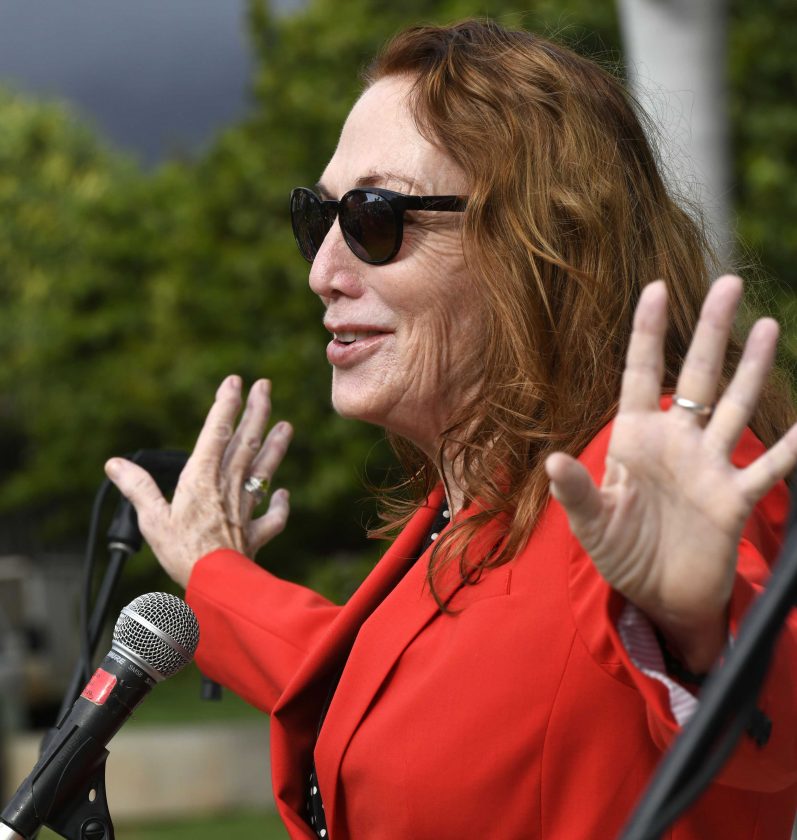 KAHULUI — A refocused women’s march for Maui launched Saturday, with the return of the movement’s founder and more than 1,000 participating in the peaceful protest in Kahului.

The march coincided with thousands gathering across the country in an annual rally that began the day after President Trump was inaugurated three years ago. Women’s Marches started in response to a social media post by Hana resident Teresa Shook.

Recognized as founder of the worldwide Women’s Marches, Shook for the first time attended the Maui rally. In talks Saturday she emphasized the need to vote and discussed a new local effort that will take steps year-round to advance women’s rights and social justice.

Shook also said there is a reason the worldwide effort was sparked from Maui and Hawaii.

Marchers started at UH-Maui College and walked along Kaahumanu, then circled back to the campus. The Maui News / MATTHEW THAYER photo

“I think there was a reason it started in Hana,” she told The Maui News after the event. “I haven’t spoken about that publicly, really, but of all the people who were trying to create events that night, mine was the one that went viral.

“I just think there’s a reason it started here, and I think Hawaii can be a super great model for the rest of the world because of aloha. I support the mauna; I support Hawaiian sovereignty; and look at how they’re showing us, peaceful protests.”

Saturday’s march was the fourth Maui march, where people of various genders, ages and ethnicities held signs as they walked from UH-Maui College along Kaahumanu Avenue and back.

“Everyone should come to the march,” he said. “My point in being here is for the next generation. If they see that there are people out there who care, then . . . maybe it will give them a little jog to come out and vote.” 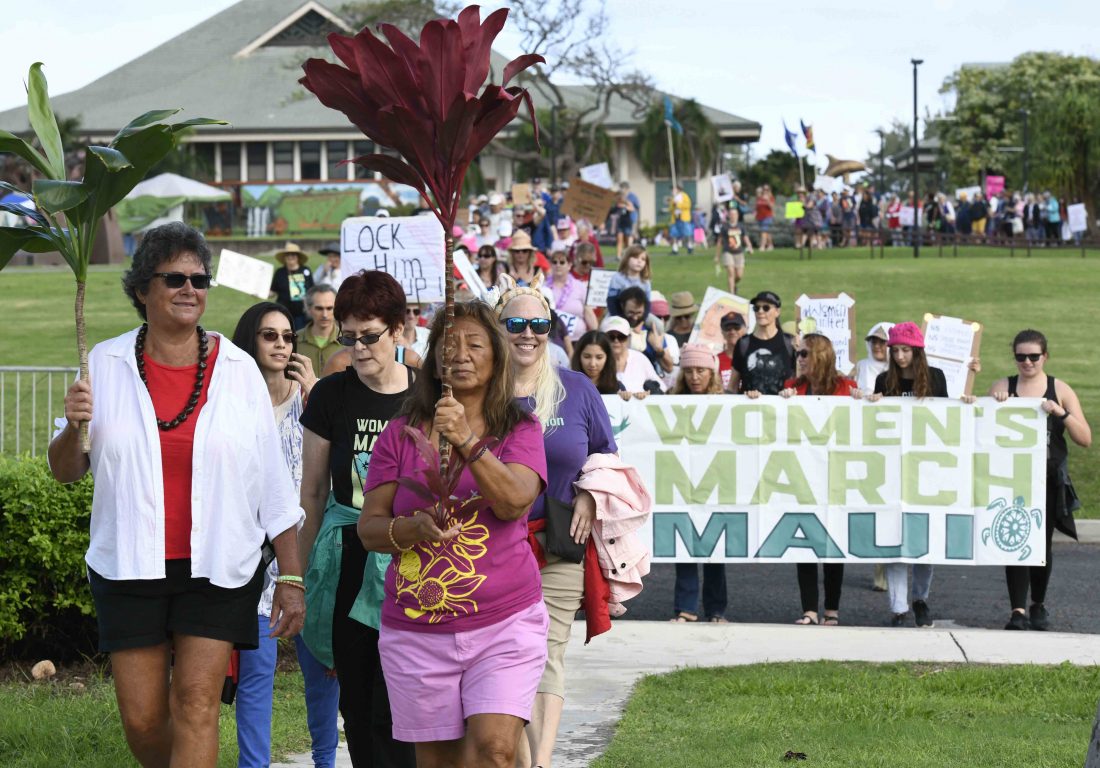 A crowd of more than 1,000, many carrying signs, takes part in Saturday’s Women’s March on Maui. The Maui News / MATTHEW THAYER photo

Haiku resident Wray Ardan also emphasized the need to vote; she said she is marking the 100th year since women were allowed that right.

“None of us would be here being able to vote if they didn’t pass the 19th Amendment 100 years ago,” Ardan said, adding that “the right for women to function more strongly on the planet” motivates her.

The Maui march was noticeably more peaceful than in years past. Counterprotesters, who did not appear this year, typically position outside the college with megahorns and signs, sparking exchanges between the groups.

“It feels so great to not have that tension. And even driving down the street in past years we’ve had a few people maybe shouting or frowning at us, and this year everyone seemed positive,” said lead organizer Marnie Masuda-Cleveland, a Wailuku resident. “I think maybe people know what’s at stake and it’s becoming a reality that we have to do something.”

Maui’s march featured for the first time a festival of food and music; it marks the start of a new year-round effort to advance women’s rights. 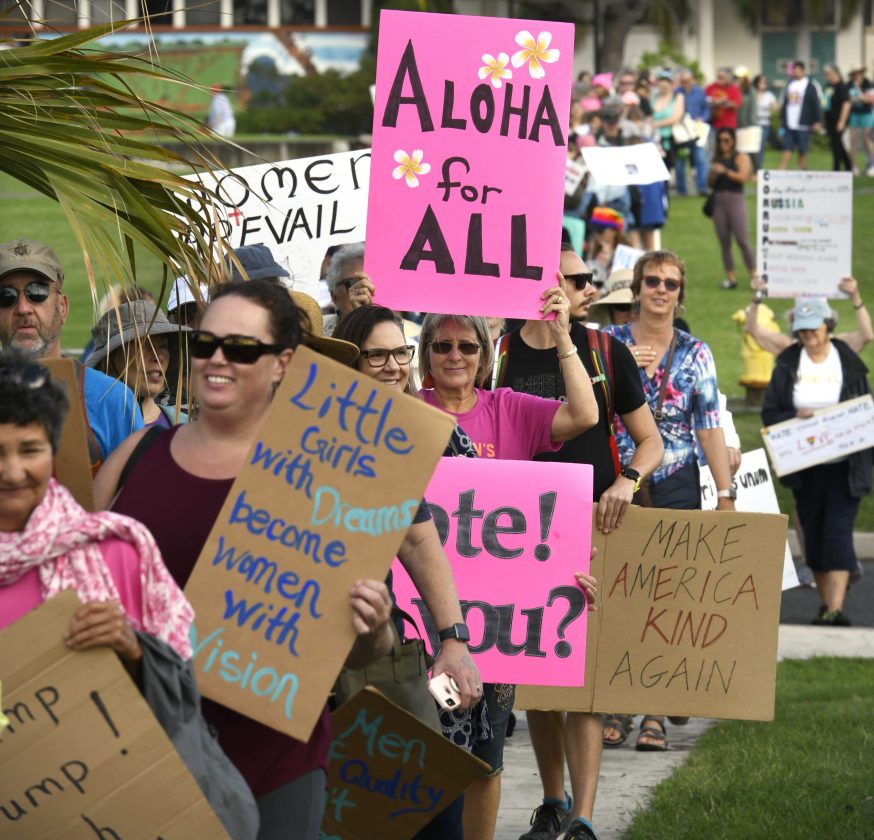 “We just recreated the board — it will be our own organization for Hawaii and we will intersect with sister marches but probably not as much with national. They are doing their own thing,” Shook said.

“All the sister marches are really separate and unique to each space, and we are especially unique, we are separated by miles and by culture,” she said. ” We will do it our way. By being here and taking it back — because now it’s come full circle– we can go out to the world from here and show them aloha.”

Masuda-Cleveland said the scholarship for a high school senior will be based on donation and will encourage young women to engage in activism and social justice.

“One voice, one action, one woman can change the course of history,” Masuda-Cleveland said in a speech. 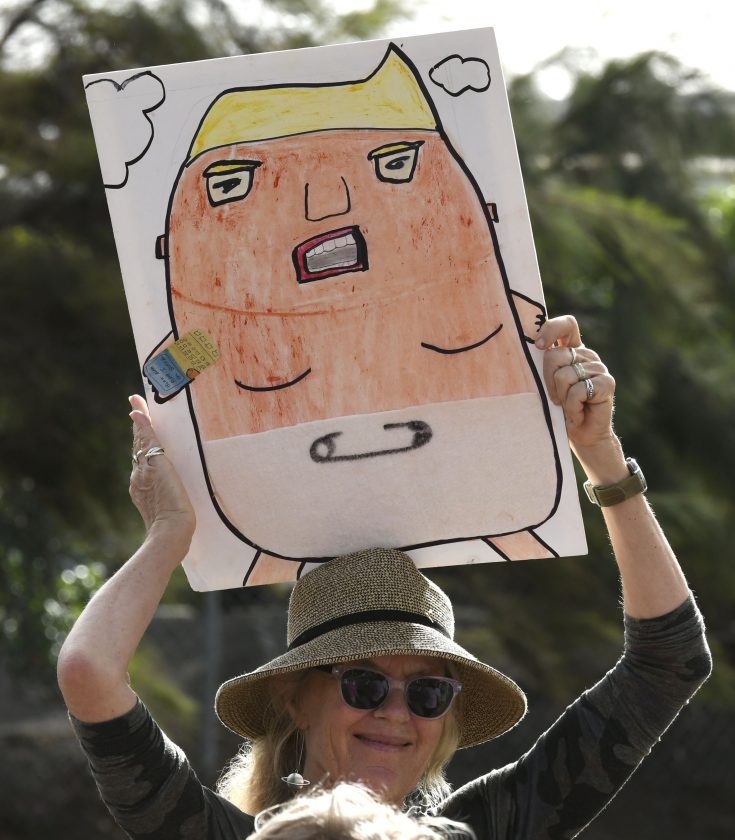 She added that this year’s march is “the beginning” of the coalition and said to call her at 276-2256 to participate.

“There’s going to be a myriad of ways to get involved and to support throughout the year, not just the march,” Masuda-Cleveland said.

The local march coincided with thousands gathering in more than 180 cities across the U.S. as part of the nationwide Women’s March rallies focused on climate change, pay equity, reproductive rights and immigrations. The Associated Press said that crowds were noticeably smaller than in previous years.

“I’m grateful for the women that came before us — we’re not stopping,” said Shre Wilson, a Haiku resident and Maui march participant. “I was hoping for a bigger of a turnout but it is so lovely to have everyone together.”

In response to a 2016 Facebook post by Shook that went viral, the first marches in 2017 drew hundreds of thousands of people to cities across the country on the day after President Donald Trump was inaugurated. That year’s Washington, D.C., march drew close to 1 million people.

Last year, though, rallies were fractured across the country as a rift at the national level over reported anti-Semitic activities by national co-chairs led Shook to step away from the march. Shook said Saturday that the co-chairs have since resigned.

In the past, though, Shook said she had seen “ugly, hateful” rhetoric at a national level and “that is never going to solve things.”

“To me, it’s about unity, it’s about where we do intersect and how we can uplift each other,” she said. “We do this by being kind. If we don’t agree, we don’t have to disparage that person.”

Shook echoed that Hawaii, which holds more ethnic diversity than any other state in the nation, is already a world leader in peaceful but effective protest due to Native Hawaiian kapu aloha practices.

“I’ve lived in Hana for 20 years and I’ve been profoundly affected by the Hawaiian culture,” Shook said after the event. “I think that influenced me in how I saw the march: It was about love and solidarity, standing up for what we believed in — not for what we thought we could be not against, more for what could be.”

*Kehaulani Cerizo can be reached at kcerizo@mauinews.com.