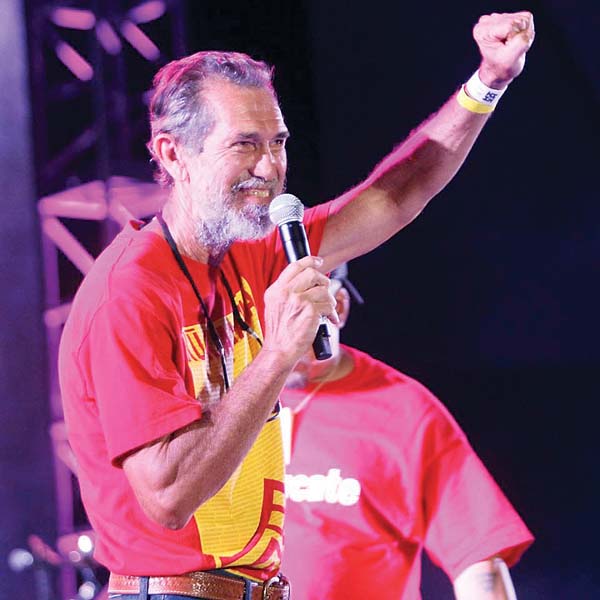 Molokai resident Walter Ritte, a longtime social activist who famously spent more than a month on Kahoolawe to protest its bombing, has announced his candidacy for the state House of Representatives.

“We must give people a reason to vote again, by giving people a candidate who has been building a solid pathway forward, and by returning aloha ‘aina to the center of decision-making,” Ritte said in a news release Wednesday.

Ritte is a community leader in critical issues, including for water rights, responsible land development, food security and the protection of natural and cultural resources. He is currently the executive director of ‘Aina Momona, a nonprofit organization dedicated to the protection of Hawaii’s resources and justice.

A graduate of Kamehameha Schools-Kapalama, Ritte attended the University of Hawaii at Manoa and later returned to Molokai, where he continued his kuleana as a Hawaiian practitioner, educator and community advocate.

He was among the famous “Kahoolawe Nine,” who landed on the shores of the island on Jan. 4, 1976, to protest the U.S. Navy’s use of the island for bombing practice. Ritte and Noa Emmett Aluli spent three days evading authorities before being escorted off in handcuffs. In 1977, Ritte returned with Richard Sawyer and spent 35 days on the island.

Ritte was also a vocal opponent of Molokai Ranch’s plans to build 200 luxury homes at Laau Point on Molokai’s west end in 2008.

Most recently, he was among the many kupuna who were arrested while peacefully protesting the Thirty Meter Telescope atop Mauna Kea.

“My life’s work has involved empowering our community and uplifting their voice,” Ritte said. “It can be a defeating experience when your representatives walk out on a meeting before a critical vote is taken, leaving community members who invested time, money and energy to be at that meeting on Oahu never to see a vote take place.