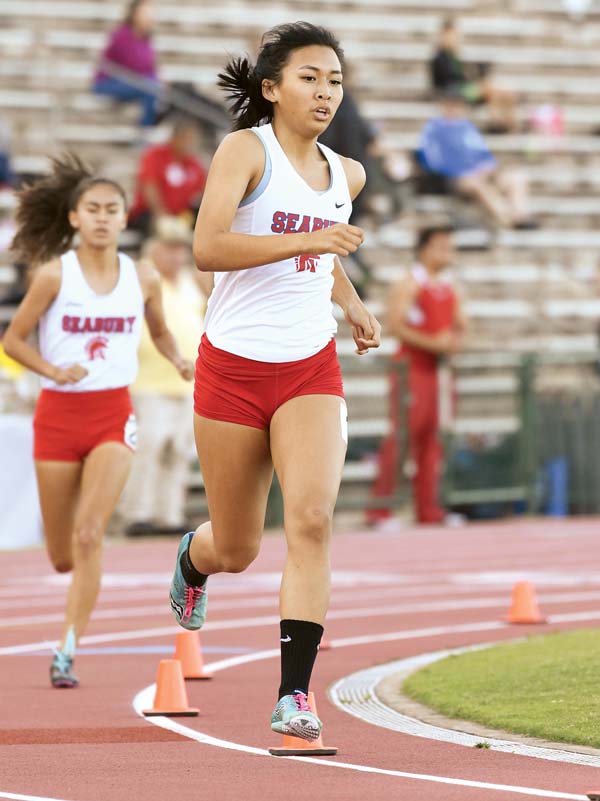 Seabury Hall’s Chloe Gangnath wrapped up her prep career with state golds in the 800 and 1,500 meters earlier this month. The Maui News / MATTHEW THAYER photo

Cadiz didn’t start off in his signature 300- and 110-meter hurdles. In fact, the Bears senior says that his first couple practices as a freshman were with the distance squad.

“I was like, ‘I’m not going to do distance,’ “ Cadiz said with a laugh. “So then they threw me in sprints and they thought I was a good sprinter, and I had pretty long legs so they put me in hurdles, and that’s how it began.”

The switch has led Cadiz on a journey of record-breaking performances and numerous titles, culminating in being named The Maui News’ Maui Interscholastic League Boys Track and Field Athlete of the Year. Gangnath is the Girls Athlete of the Year after dominating the distance races this season.

After following his passion for sprints, Cadiz’s athletic career filled up with regular-season wins in the 110 and 300 hurdles, six individual MIL championship titles and three state crowns between the two events. Last month, he also ran the anchor leg on the Bears’ championship 400 relay team, helping Baldwin claim its 14th straight MIL crown. 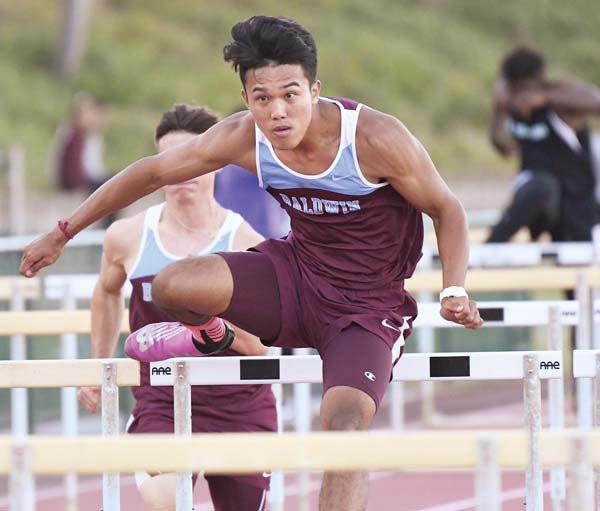 Two weeks ago in the state prelims, Cadiz set a state meet record of 14.19 seconds in the 110 hurdles at Yamamoto Track & Field Facility.

“I felt like (my last season) came to a perfect end even though I didn’t get to win the state title,” Cadiz said. “I got to break records and travel with my team, so I felt like it came out pretty good.”

After nearly qualifying in his specialty event as a freshman, Cadiz broke through in his sophomore year and took home the state crown in the 110 hurdles. He returned the following season and defended his title while also capturing gold in the 300 hurdles.

“After freshman year, I feel like I grew more mentally than physically just because of the all the work I was putting in with the coaches and being with them for awhile,” he said. “They taught me to grow up and take the hard hits and come back stronger.” 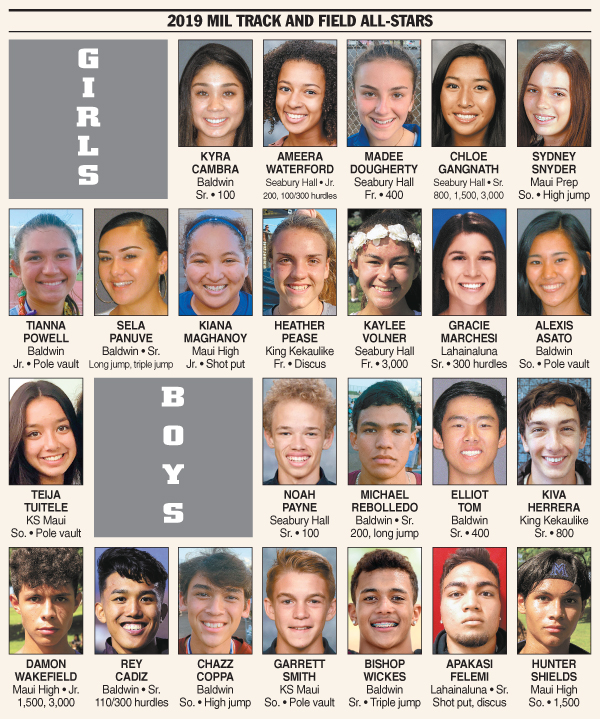 Since day one of high school track and field, Cadiz has been dedicated to the sport and “always did everything we asked of him,” Baldwin coach Gary Sanches said. “He never complains.

“We’re going to miss him, you know, a four-year letterman,” Sanches continued. “He came to practice every day, he was a good leader. … He did everything right for us. So we’re really proud. So hopefully he goes to the next level and runs.”

Cadiz said that he’s been researching colleges to attend, but wants to keep his decision a surprise.

“I definitely complained a lot,” Gangnath said with a laugh. “But coach Bobby (Grossman) noticed that I could be in with the better group and moved me over to work out with them. I’m glad I did that and started things off like that.”

Needless to say, the Spartans distance runner has made tremendous improvements since first joining the team and training with the likes of future state champions Veronica Winham and Ava Shipman.

Gangnath wrapped up her prep career with three individual MIL titles and two state gold medals in the 1,500 and 800 this season.

“I could never have imagined that it would turn out like this,” she said while reflecting on her high school career. “I’m pretty glad that I had so many opportunities to do well. … I feel like everyone who I had as teammates in the past and currently, were very hard working and definitely, like, good motivators to push through practices. So, that helped a lot.”

Anytime she was at practice, Grossman said that he could always count on Gangnath to give an effort and push herself.

“Chloe came in as a competitor,” Grossman said. “She immediately made an impact on the team. Her freshman year, she was one of three people that was already doing a varsity workout, what I would call a varsity workout, and she was always competitive.”

Gangnath did not qualify for a state track and field championship until her junior year, when she finished third in the 1,500 and second in the 800.

For cross country, she always kept herself in the mix but still fell short of the top 10, finishing 12th in the state as freshman, 21st as a sophomore and 13th as a junior.

“I definitely have a lot more focus, I think, while I’m running,” she said. “I don’t dread certain workouts anymore. I go in knowing that I want to get stuff done.”

“To make that effort prior to track, to get strong enough and fast enough, to do all the things you need to do to be the best one in the state, it takes a lot,” he said.

Gangnath heads to Baylor University in the fall to continue her running career and pursue a degree in chemistry.

“I didn’t know the extent of Seabury’s history (prior to high school),” she said. “I definitely take a lot of pride in being on the team and continuing its tradition.”