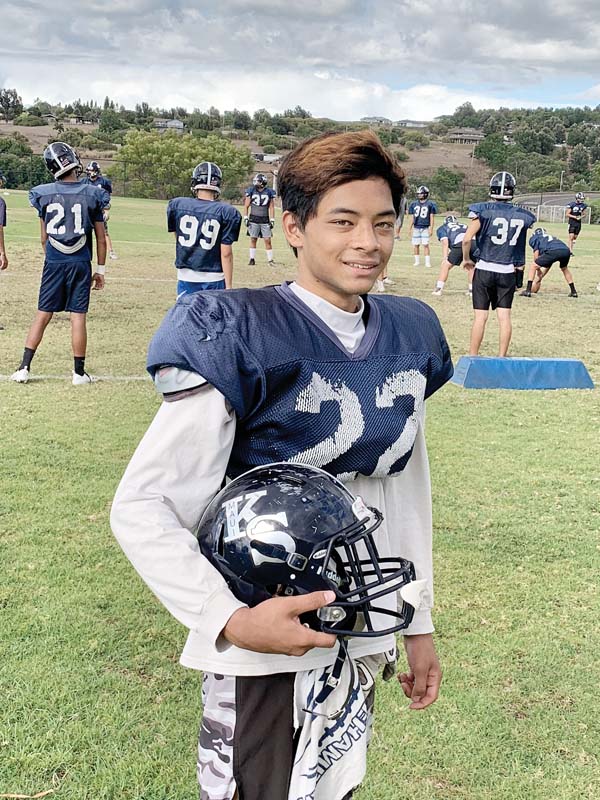 Kamehameha Schools Maui senior Kamahao Kang was diagnosed with high-functioning autism (HFA) during the summer prior to his freshman year, but he isn’t letting that stop him from being a standout student-athlete for the Warriors. The Maui News / ROBERT COLLIAS photos

PUKALANI — Kamahao Kang has carried the football twice this season for 13 yards for the Kamehameha Schools Maui team. The mop-up duty at running back came in the waning minutes of a 39-0 win over Molokai.

Last week in a 34-18 Warriors win over King Kekaulike, Kang entered the game as a defensive back. He is a regular on the kickoff team.

“He’s always been one of us,” standout defensive lineman and team captain Michael Kalalau said of Kang, a 5-foot-8, 155-pound senior.

Kang is a unique high school football player — he was diagnosed with high-functioning autism (HFA) during the summer prior to his freshman year at Kamehameha Maui.

That hasn’t stopped him from being a standout member of the wrestling team, a Maui Interscholastic League silver medalist in judo as a sophomore and a four-year player in the KSM football program. 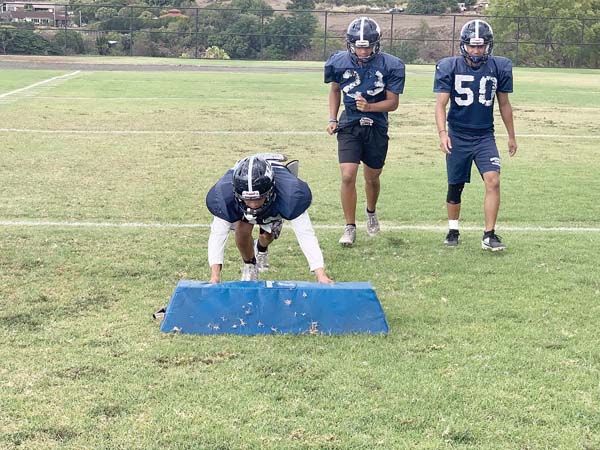 “It’s a really cool environment to be in,” Kang said. “For me this sport has really taught me a lot, especially how to control my condition and use it in a way that can help benefit the team.”

Jiu-jitsu is Kang’s favorite sport “because there’s so much things that you can do in that sport and not only is it just a sport, it’s like real life, too. Self defense.”

He took to combative sports from the beginning as a youngster, tearing up the mats as a youth in the Maui Style Wrestling program.

His father Brandon Kang tells a story of his son’s first wrestling practice, when Kang’s parents sat in the car and expected their 5-year-old son to return to the car within 15 minutes of the start of practice. Instead, the coach came out at the end of practice and asked how long their son had been a wrestler.

“You want to be the best as you can be, so it’s always fun to challenge yourself,” Kamahao Kang said. “Push yourself through obstacles that you didn’t think you would be able to do, but when you overcome those obstacles it’s just like that awesome feeling. Like, ‘Wow, you did it.’ “

Kang doesn’t consider himself exceptional, even though there are barriers he’s conquered that many with his circumstances do not.

“It’s just getting used to my condition, but it’s also fun because I still get to do the sports that I like to do without having other people questioning me about my condition,” Kang said. “There’s just so much freedom.”

After having ups and downs in school through seventh grade, Kang was accepted into Kamehameha Maui as an eighth-grader. His HFA diagnosis came after he spent a year at the school, but the KSM community has fully embraced him, from teachers to classmates to coaches.

“Academic-wise, they are very supportive to me, especially with my condition,” Kang said. “They’re just giving so much help, it’s just a blessing to come to this school and this school has a lot of opportunities and they’re willing to help you get to where you want to be in life. I’m more than just grateful.

“There’s always someone out there who’s, like, ‘Hey, I got your back.’ That’s what I took from being at this school.”

Kalalau just found out Wednesday that his teammate has HFA.

“I actually didn’t really know that,” Kalalau said. “He’s a part of the team, he’s always working hard. He’s always there, every day at practice. … He’s just a hard-working kid.”

“It took me a while, I never knew that he was high-functioning autistic,” Afoa said. “In fact, I always knew about autism, but I didn’t realize the different levels of autism. It’s never been a problem. He knows what he’s got to do. He has to do a few more reps, but that could be said for any player. … That’s what makes him so special, whatever challenges he has he just plays through them and works over them. There’s nothing better than someone who has challenges who feels he’s just like a normal Joe.”

Kang is ready to contribute any way possible to a team he believes in.

“We can be the best in this league, we just have to keep working harder, just keep on pushing,” Kang said. “Don’t give up when times are down.”

Kang spent Tuesday on Lanai for his senior project. His long-term goal is to be a pilot.

“I was doing my senior project on like how drones can be used for first responders such as firefighters, police, ambulance,” Kang said. “So for example, I went to Lanai and they have the fire evacuation at the airport. They took a group of kids from Lanai High School on the bus, along with me. The bus acted like the plane had gotten into a crash.

“I got to be the victim and I got to videotape what the firefighters were doing. It was really interesting, just seeing all the guys go out there and seeing what they were doing, tagging people — who was injured, who was not injured. Then, in the end, they wanted to implement drones where they can’t really see from the ground level. So, they can see if there’s other bodies around the area, rather than spend thousands of dollars on the helicopter.”

The bottom line for Kang is simple: He is proud to be a trailblazer.

“Just don’t give up on what you want to do, it’s always possible if you just work towards it,” he said. “Just go out there and just show them that, ‘Hey, I’m not just some disabled kid.’ You’re like everyone else. You want to be a player — just be a star.”