Expert: Recycling more water could limit use of injection wells 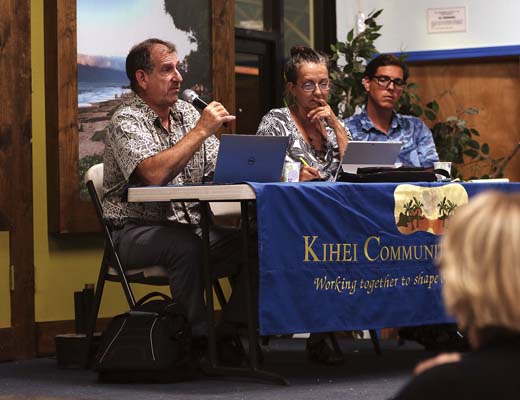 KIHEI — Improving wastewater treatment systems, reducing nitrogen and phosphorous within injection wells and changing the public’s perception of recycled water are key areas the county should consider, according to a former county wastewater operations superintendent.

That’s the wrong way to look at it. We should look at this as a drought-proof supply of water — it doesn’t go away.

“I look at this as a tremendous opportunity to really ensure we have drinking water for drinking instead of throwing drinking water on the ground to irrigate grass,” he said.

Recycling water would lessen the use of injection wells and save taxpayers money in the long run, Parabicoli said. The Kihei Wastewater Reclamation Facility treats about 4 million gallons of wastewater a day with only half of it recycled and the other half injected.

More of that water could be recycled, especially during the summer months when demand for recycled water increases and injection wells are minimized, Parabicoli said. The county also could build more waterlines to areas such as Wailea, where a million gallons of drinking water a day irrigate landscapes, he said.

“During wintertime when irrigation demands drop in this area, we can send water down there and shut these wells off and use this recycled water,” he said. “That would reduce injection wells over here at the Kihei plant to backup use only during rainy days.”

Recycled water systems are “extremely expensive, costing millions” of dollars, including the county Wastewater Division paying for the infrastructure, Parabicoli said. The hefty initial investments are worth it, he said, adding that the county should broaden its funding base because “the Wastewater Division trying to go it alone is not enough.”

Parabicoli was part of a wastewater working group formed about seven years ago under former Mayor Charmaine Tavares, whose goal was to use 100 percent of recycled wastewater within the next decade. The group recommended soliciting money from the hotel industry, creating an environmental fee as part of property taxes or possibly getting the county Department of Water Supply to help pay, considering it “would be saving 600 million gallons a year of drinking water.”

For the final report, visit www.co.maui.hi.us/DocumentCenter/Home/View/12037.

The county is moving forward with more recycled water projects as well as expanding existing ones at South Maui Community Park, the Maui Research and Technology Park and extending a waterline to the future Kihei high school, Parabicoli added.

Aside from improvements to recycle systems, Parabicoli suggested the county add more reactors at wastewater treatment plants to further reduce nitrogen levels. In 2015, a U.S. District Court chief judge ruled that all four injection wells at the Lahaina wastewater facility are “illegal” and in violation of the Clean Water Act.

Maui County has appealed the landmark decision to the 9th Circuit Court of Appeals, which officials believe will have implications for states and counties across the nation. County officials said the ruling means injection wells are subject to the Clean Water Act, even though they are operating in compliance with permits issued under the Safe Drinking Water Act.

“The water is highly treated, and the county is exceeding all the current regulatory requirements,” Parabicoli said. “If that’s not good enough, then maybe we need to appeal to the regulators. This is how the Clean Water Act was founded in the first place. People were not happy about the state of the nation’s waterway and they demonstrated and called the health department, and the EPA was founded back then. Maybe the Health Department needs to hear these concerns.”

Injection wells are not the only source of pollution, Parabicoli said. Nonpoint source pollution remains a “big problem,” and “every time it rains, the water turns brown.”

“Sedimentation has been identified as the number one cause of coral reef decline,” he said. “It’s not just injection wells causing all the world’s problems. They’re contributing, but certainly not the whole thing.”