Part of old Haleakala Highway to close, private plane area will be relocated

A Hawaiian Airlines jet lands at Kahului Airport on Tuesday while aircraft from Alaska and Southwest airlines wait on the tarmac. The state is looking at a $250 million project to reconstruct the main runway at the airport. -- The Maui News / MATTHEW THAYER photo

KAHULUI — A portion of old Haleakala Highway on the southeast end of Kahului Airport will be closed and private and charter planes relocated to the Kanaha Beach side of the runway as part of the closure and reconstruction of the main runway.

The closure of the highway, also known as Kala Road, and relocation of general aviation are needed for a temporary runway on the east apron taxiway while the main runway undergoes much needed reconstruction, said state Department of Transportation spokesman Tim Sakahara during a public scoping workshop Wednesday night at the Maui Arts & Cultural Center.

The state is seeking public comment on the runway reconstruction project as it prepares a draft environmental assessment for the work, set to be released in the spring.

The project, which could take up to three years, is estimated to cost $250 million. The actual runway reconstruction is expected to take nine months but preparations are necessary to deal with the runway closure. No timetable was offered for the start of the project.

Project funds will come from fees the airlines pay the state; some federal funding may be possible, as well, Sakahara said. No state general fund money will be used. 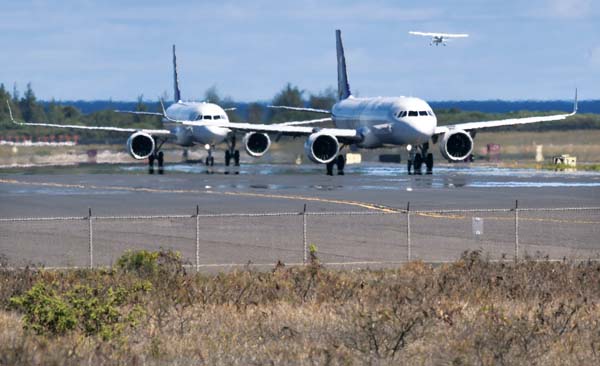 A pair of Hawaiian Airlines jets taxi after landing Tuesday as a small aircraft takes off at Kahului Airport. The state Department of Transportation has begun plans to close the main runway for reconstruction and establishing a temporary runway during the work. -- The Maui News / MATTHEW THAYER photo

Deputy Director Ross Higashi of the state Department of Transportation Airports Division stressed that the work involves reconstruction of Runway 2-20.

“We want to do a one-time permanent fix,” he said in an interview at the meeting. “We are not expanding. We are not extending.”

Higashi’s three main concerns are safety, eliminating the need for periodic partial fixes to the busy runway and maintaining Maui’s economy by continuing to accept flights into the airport during runway reconstruction.

According to informational project boards at Wednesday night’s meeting, the runway’s 18-inch asphalt is failing, and the 6-inch aggregate base layer consists of inferior material that cannot support the weight of aircraft operating at the airport.

The state Transportation Department has said that the current runway pavement can last until 2023. The pavement deterioration creates the potential for foreign objects to strike airplanes. 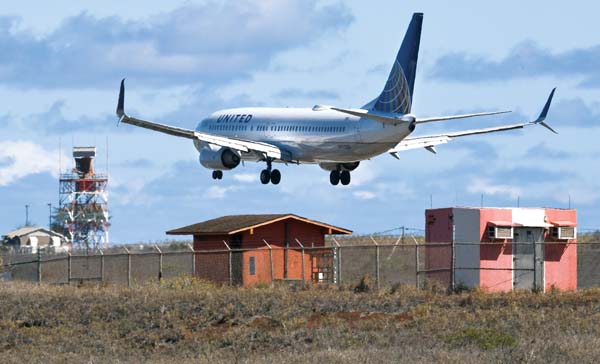 A United Airlines flight makes its final approach into Kahului Airport on Tuesday. A state project to reconstruct the main runway at the airport would involve closing a portion of the old Haleakala Highway and moving private and charter aircraft to the Kanaha Beach side of the runway. -- The Maui News / MATTHEW THAYER photo

Runaway 2-20 was built in 1942 and last underwent repairs in May 2015 at a cost of $5 million, the Transportation Department has said. Higashi said that a full reconstruction of the runway should last 20 years without the need for major repairs.

Kahului Airport is the second busiest in the state after the Daniel K. Inouye International Airport in Honolulu. In fiscal year 2018, Kahului Airport handled 7.3 million passengers.

Although the draft environmental assessment will include several proposals to consider, including doing nothing and shutting down the airport to complete repairs, Sakahara said the more feasible alternative involves creating a temporary runway east of the current runway near the general aviation area.

Mark Conway, a contractor for the Transportation Department, said Wednesday night that the smaller private general aviation aircraft may be able to take off and land on the shorter Runway 5-23 that commuter airlines use. This would eliminate some of the longer taxiing smaller planes will need to make when they are relocated.

Sakahara said general aviation facilities will move back to their original spots when the runway reconstruction is completed.

The temporary runway also means the temporary closure of a portion of old Haleakala Highway, or Kala Road, running near the airport. Sakahara said the closure is necessary because of the close proximity of the temporary runway to the road. He did not have an estimate as to how long the highway would be closed.

The Transportation Department is checking with various government entities to see if there is a possibility for another access way or another road in the area.

Community activists and environmentalists offered mixed views on the project.

Kula resident Dick Mayer, who attended the public open house along with an earlier meeting for government agencies and stakeholders, said he was concerned about the $250 million cost of the project. Even though airline fees will be used, he would like to see the money spent on minimizing visitor impacts rather than on “bigger buildings and fancier facilities.”

Mayer also questioned why there were two meetings held — one for government agencies and stakeholders and another for the general public. There was presentation at the stakeholders meeting; the public meeting only had information boards with officials available to answer questions.

It would have been instructive for the general public to listen in on questions raised by agencies and stakeholders and the answers, he said.

Albert Perez, executive director of Maui Tomorrow, was concerned about the temporary closure of old Haleakala Highway, calling it a “critical alternate access.”

Sakahara explained that the Transportation Department held two meetings, one earlier on Wednesday for government officials and stakeholders, who could more easily attend a meeting during working hours, and the second one for the public, who could attend the meeting at their leisure between 5:30 and 7:30 p.m.

Although the formats differed, Sakahara said the same information was presented in both meetings.