Year after hiker’s rescue, questions remain about it all 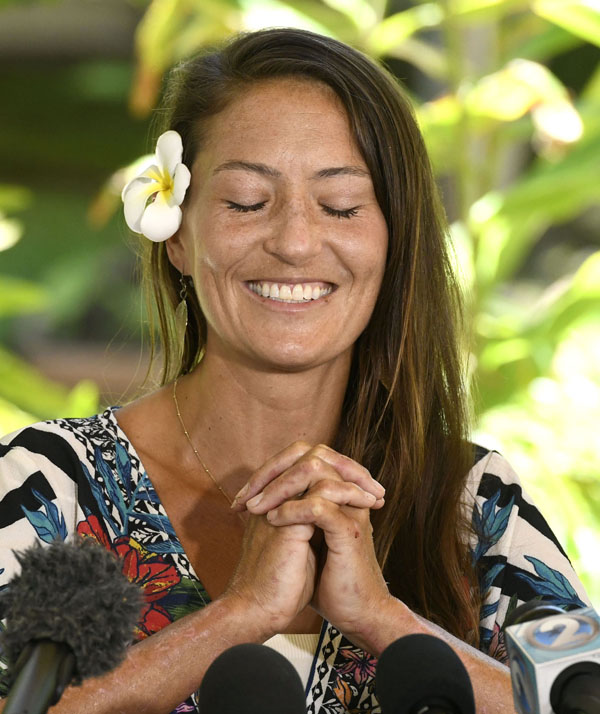 AMANDA ELLER Lost in the woods a year ago

MAKAWAO — A year after Amanda Eller was found, the search for answers continues.

Vorhes is an employee of Windward Aviation. Its Air One helicopter is contracted by the county to assist police and fire crews during search and rescue, body retrieval and firefighting events. Despite countless search and rescues over two decades, Vorhes said he’s never seen a case receive the attention that Eller’s did.

As one of the most publicized events in recent Maui history, the Eller case put quiet, rural Upcountry at the center of a network TV mystery episode. Initially, isle residents wondered if Eller was abducted or if another nefarious incident had occurred in their typically safe backyard. 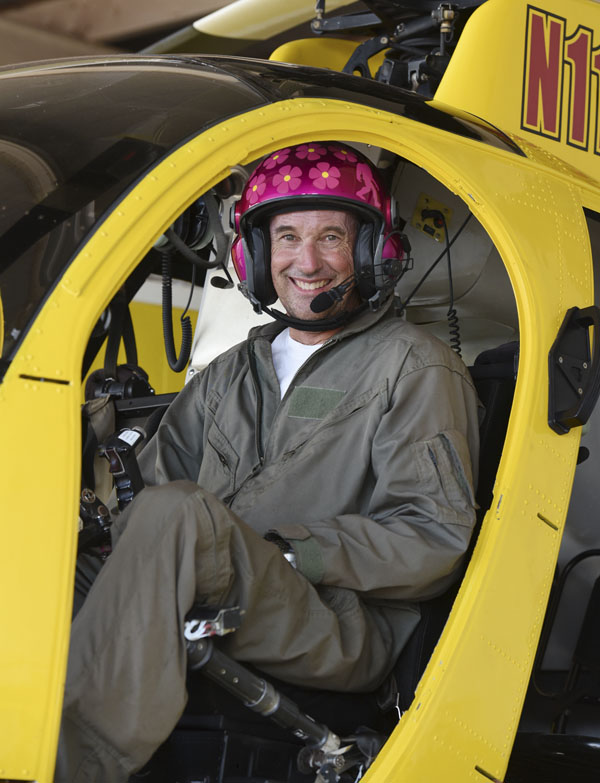 The case also cast a spotlight on differing search-and-rescue approaches, while amassing widespread community involvement. Eller vanishing, leaving behind her car, keys and cell phone at the Makawao Forest Reserve Hunter’s Trail parking lot, gathered the most volunteer searchers to date and more than $70,000 in online donations.

Still, the community wants to know more about what happened to Eller, Vorhes acknowledged, adding that he still receives texts and messages about the case.

“I know the end of the story: She was lost. They hadn’t seen her,” he said. “The beginning of the story, I don’t know.”

A year later, the forest is quiet again. 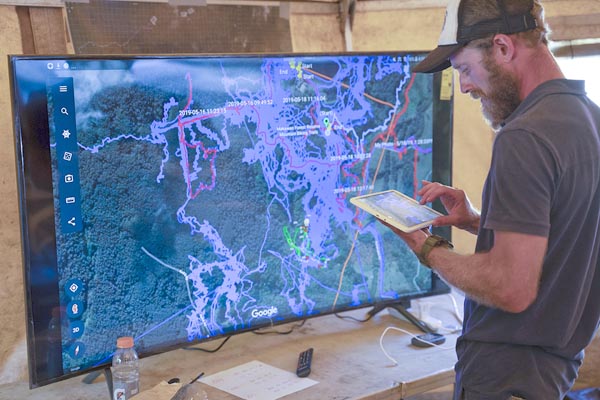 Volunteer Chris Berquist, coordinator for the Amanda Eller search, combs through data coming in from GPS-tracked searches of the Makawao Forest Reserve. This photo was taken May 19, 2019, day 11 of Eller’s disappearance. FRANK DEUTSCH photo

Recharging in nature’s refuge, along with unplugging from technology, is why Eller said last year that she often came to Makawao Forest Reserve in the first place.

Her mother, Julia, said last year that her daughter started out with the intent to do a short jog, meditated, fell asleep “on a log,” then lost her way.

Eller went deeper into the forest, thinking she was heading back to the car. She later recounted to media that she survived off stream water, lost her shoe in a flash flood, ate moths, berries and other forest wildlife and slept in a boar’s den.

During the search for Eller, Vorhes logged about 20 hours and 20 trips in Air One, with some county funding and other money from private donations and others. 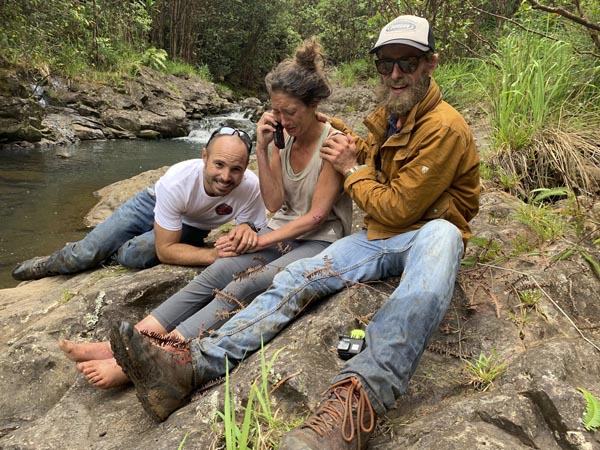 Flanked by rescuers Javier Cantellops (left) and Chris Berquist (right), an emotional Amanda Eller phones her family to let them know she’s been found in East Maui. The amazing story of Eller’s disappearance and rescue one year ago captivated the island and the nation. TROY HELMER photo

On May 24, Vorhes took Berquist, Cantellops and Helmer to Keanae Valley — farther out than the area they had been searching.

On the way back, the pilot was watching his fuel. He went mauka of Kailua reservoir, and seeing a fork in the river, decided to go right. That’s when the group spotted Eller.

“I felt shock. I felt grateful. It was a huge relief. Call Rescue 10, pull Air One out, we found her. It was just like, I can’t believe it. I just can’t believe it,” Vorhes said.

Berquist said the moment they told others about Eller’s discovery, it sparked the “shot that was heard around the world.”

“It’s still the coolest thing I’ve ever done in my life,” said Berquist, who continues to work for Search Tech Advisory Team, a tech-based search-and-rescue nonprofit founded with seed money by Eller’s father, John. Finding Eller was “the best feeling in the world,” he added.

Cantellops said that next to being a father and husband, it was the “highlight of his life.”

When Eller was recovered, she was badly sunburned, had lost weight and suffered leg injuries.

Eller talked in subsequent media events of the “spiritual bootcamp” that she endured over the 17 days. But in the days that followed her discovery, celebration turned to criticism. Even now, people continue to ask whether there is more to the story than originally disclosed.

Did Eller set out to get lost in the forest? Did she take anything that altered her state of mind? On the first day she got lost, how did she fall asleep on a log in the woods? How did she survive on stream water when her electrolytes came back perfect? How did she sleep in a boar’s den as she described? Didn’t she cross roads and other markers? Why did she keep heading the direction she did? Where is she now?

During interviews this week, searchers said that they’ve heard it all. Cantellops said the most outlandish question he’s received is whether Eller was “hiding out at his house” for the 17 days.

Others, though, push back, hailing her as a hero, an inspiring testimony to the human will to live.

Berquist and Cantellops, both of whom still live on Maui, continue to say that her mind was not altered when she embarked on her jog and that she has been unfairly targeted with “hateful” language.

“Regardless of why she was there or how she got there, if your kid was lost, you would want people to search too,” Berquist said.

Cantellops did say that Eller could have said some things differently in speaking to media. Overall, though, he denounced people who question the story and who talk about “aloha” but who don’t live it.

“If you have your own little theories on why she got lost, if you want to think she’s an idiot, that’s one thing, but disrespecting the memory of this, disrespecting what happened, is disrespecting every single volunteer with that search-and-rescue team,” he said.

Some answers can only be provided by Eller, who Berquist said moved to Maryland after a trip to India last fall. She has refrained from interviews since the media firestorm in the weeks after her discovery. Eller did not respond to interview requests this week from The Maui News.

On a May 8 Facebook post filled with gratitude, Eller said, “One year ago today, I went for a hike in the makawao forest reserve. 17 days later, I was found by a helicopter. For me, today is a celebration of life. And I have many people to thank.”

Vorhes said that if a movie or book happens, he will make sure it’s done the right way. He will not allow “world class” search-and-rescue teams in the Maui fire and police departments to be questioned.

Vorhes said he believes Eller was legitimately lost, and that her ground searchers did not know where she was. “Absolutely” their emotions were raw and real when they saw her that day.

Despite all the mysteries that remain, Vorhes said he does have one answer. The pilot found Eller’s missing shoe about 100 feet away from where she was spotted near a river at the top of a waterfall, deep in Kailua, around 5 to 7 miles from where she started.

• MRA. Two hearings are scheduled this week on a proposed six-story, 156-room Hotel Wailuku, near the corner of ...

The Alexander & Baldwin Sugar Museum, which has been closed due to COVID-19 emergency orders, will reopen ...

The lower parking lot and roundabout at Ulua Beach in Wailea will be closed Wednesday for a day to replace and ...

A group of about 200 peaceful protesters gathered at the intersection of Hana and Haleakala Highways on Saturday ...

THE FOLLOWING SENTENCES for driving under the influence of intoxicating liquor occurred on May 27. The listings ...