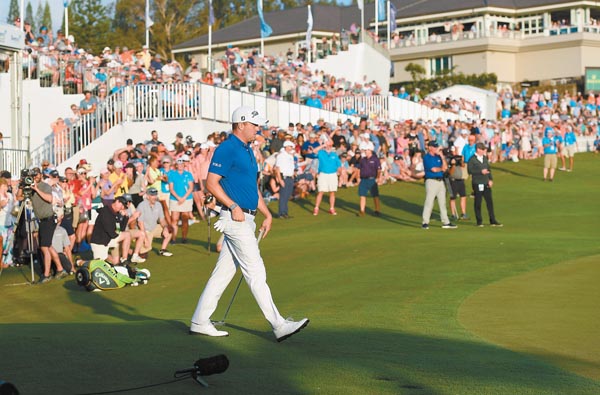 Justin Thomas, the 2020 Sentry Tournament of Champions winner, walks toward his ball during a playoff at the Kapalua Plantation Course in January. Sentry Insurance announced Tuesday that charitable donations from the 2020 event totaled more than $459,000. The Maui News / MATTHEW THAYER photo

When Sentry Insurance took over as title sponsor of the PGA Tour’s Tournament of Champions in 2018, the business insurance company wanted to solidify itself as a presence on Maui.

The company took another step in that direction on Tuesday with the announcement of $459,743 in contributions to charitable organizations around Maui County this year — it is the highest amount the tournament has raised since 2007 and the second-highest in its 22-year history.

The leaps in donations have come with some ingenuity on the part of the event organizers such as 2020’s Aloha Friday, in which the Sentry Foundation made $1,500 donations for each golfer in the field who wore Hawaiian print attire or had Hawaiian print on their golf bags.

A total of 14 players did so in the second round to put $21,000 into the pot. The idea started with a couple players donning aloha shirts in 2019.

“We started just for fun and a couple guys did wear aloha shirts and then we decided: ‘You know what? Charity’s important, Sentry Foundation can provide a little bit of incentive’ and we saw more,” Stephanie Smith, chief marketing and brand officer for Sentry, said in a Zoom conference call. “What (tournament chairman) Alex (Urban) told me is that some of the players who didn’t were quite disappointed that their apparel providers didn’t provide an aloha print.”

Smith added, “I heard a story that more than one of them was on the phone, saying, ‘Hey, when I’m back I need an aloha print.’ So, I think this will catch on and continue to grow.”

“It’s one of those things where the best ideas — from our perspective — are the ones tied in with the fabric of the event,” Urban said. “That (Aloha Friday) was such a natural idea that some players were already doing it on their own. To create a special way to generate more dollars, it just presented itself. It was super successful in year one and we’re just going to see it grow.”

“One of the most memorable things from the tournament was two years ago when we came for the first time, when we came for this charity announcement,” Smith said. “Our CEO Pete McPartland and I sat down and we talked to each one of the charitable beneficiaries and learned more about what they do.

“It was really moving to hear about the needs and the commitment of all of these charities to serving the people of Maui.”

The main sponsors provide much of the volunteer force that is needed to run the event.

“One of the things that is so special about this tournament is that we are supporting one another,” Smith said. “They provide critical manpower to the tournament and we are just honored to be able to give back to them.”

In May, the Sentry Insurance Foundation donated $200,000 to Maui United Way. At the 2020 event, Sentry announced a rare 10-year extension to be the title sponsor of the Tournament of Champions through 2030.

“Just like Sentry’s hometown of Stevens Point, Wisconsin, Maui, too, is a small town in many respects,” Smith said in a press release.“Maui is home to hard-working people who look to community organizations to lift them up — especially during these uncertain times. We think of Maui as our home away from home and are grateful for the year-round opportunity to help support the people of Maui and the local charities that do such incredible work to serve their needs.”

Last year, Sentry Insurance implemented a scholarship program for Maui public high school students to attend the University of Hawaii and its affiliated Hawaii Community Colleges. Designed to promote local workforce development, when the program is fully implemented, 12 students will receive a Sentry scholarship each year.

As a thank you to part-time Maui resident Chris Berman for his assistance in promoting the Sentry Tournament of Champions, donations were also made to the Literacy Volunteers of Greater Waterbury, Conn., a favorite charity of the ESPN anchor’s late wife.

The tournament also made a donation to Friends of the Pu’u Kukui Watershed Preserve, to help support their environmental work. Other local non-profits to benefit from the tournament included Maui Arts League, which was instrumental in the Lahaina Kickoff Event, The First Tee of Maui, Whale Trust, Hui O Wa’a Kaula, and the Maui Hotel and Lodge Association’s Charity Walk on behalf of the Westin Kaanapali.

Justin Thomas, the 2020 Sentry Tournament of Champions winner, walks toward his ball during a playoff at the Kapalua Plantation Course in January. Sentry Insurance announced Tuesday that charitable donations from the 2020 event totaled more than $459,000. The Maui News / MATTHEW THAYER photo