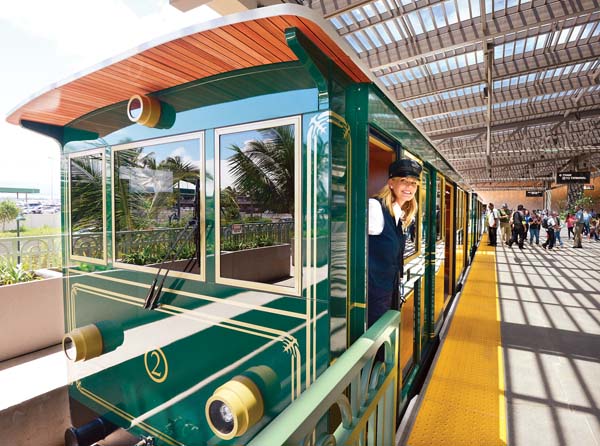 Kahului Airport tram driver Melanie Burgess makes sure her riders are all aboard before leaving the new Kahului Airport Consolidated Rent-A-Car (CONRAC) Facility for the short ride to the Departures and Arrivals Stations Tuesday morning. The $340 million facility was officially dedicated Tuesday and opens to the public today. The Maui News / MATTHEW THAYER photos

KAHULUI — Hailed as the largest single public works project on Maui and the first of its kind in the state, the Kahului Airport Consolidated Rent-A-Car facility was celebrated by state leaders Tuesday ahead of its public opening today.

The new $340 million, multilevel CONRAC houses all major rental car companies in one spot and connects passengers with the airport via electric tram. A massive, environmentally friendly project that took three years to build and created hundreds of local jobs, Maui’s CONRAC is on schedule and on budget, lawmakers said.

“The best part is this is funded with no taxpayer dollars involved,” Gov. David Ige said at the event. “The $340 million dollars comes from car rental customers from around the world who visit Maui County.”

He added that the same funds are being used for a CONRAC at the Daniel K. Inouye International Airport in Honolulu, which is slated for completion in 2021. CONRAC funding comes from a state Customer Facility Charge, a daily $4.50 applied to customers who rent a car.

Kahului’s airport is the second busiest in the state when it comes to passenger volume, but its rental car industry generates the most funds in all of Hawaii, according to the state Department of Transportation. 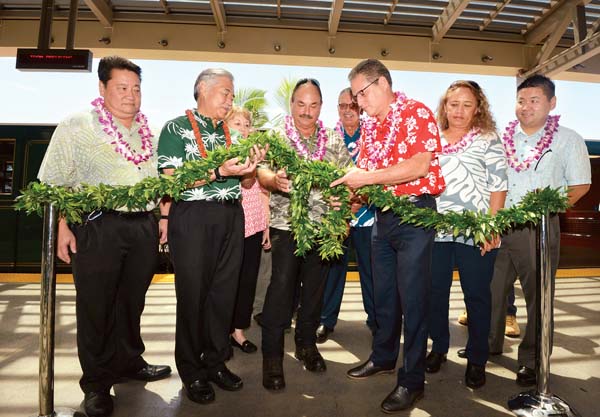 “It’s been a long time coming,” said Maui District Airports Manager Marvin Moniz, who was praised by event officials for overseeing the project. “It’s good for the morale of the rental car companies.”

“The public will no longer be directed to scattered facilities around the airport,” Hunsinger said.

Many who spoke praised the aesthetics of the new facility and surrounding upgrades, which feature plantation-style trains, an entrance water feature, open-air facility layout and a lobby train clock. 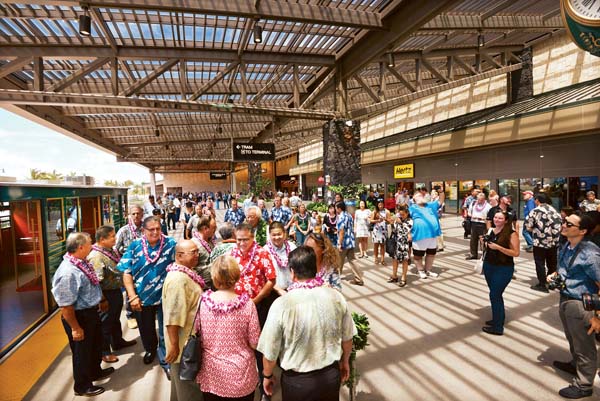 Beyond its appearance, though, the CONRAC works to reduce waste and help the environment, state lawmakers said. Deemed green by Leadership in Energy and Environmental Design, a recognized green building certification program, the project will help save energy costs, reduce waste and increase indoor air quality, among other benefits, according to state DOT.

Kahului Airport’s new free tram will relieve congestion by eliminating 25 shuttle buses that transport customers to various locations, an average of 85 trips per hour. Now, up to two trams, with two cars each, will take 38 people per car with luggage along a three-stop (two at airport and one at CONRAC), half-mile route. A roundtrip will take approximately six minutes. Trams begin at 6 a.m. and will close between 11 p.m. and 5 a.m., depending on flight times.

“The visitors as well as the locals can benefit from having a reduction of traffic at this terminal,” Moniz said. “This is a blessing for us.”

Also, the water feature fronting the airport has functional purposes. Its waterfall and pools draw used airport water to get aerated and then pumped back out for irrigation, English said. The irrigation reservoir holds nearly 140,000 gallons of non-potable water, which means more potable water available for the community, the DOT said. The $2.9 million water feature was installed in 2016 when the DOT opened the new Airport Access Road.

“We decided to put in a feature like this because it serves a function,” English said. “It also has a sense of place and a sense of welcome.”

Maui’s CONRAC, which uses solar power, offsets 22 percent of total annual energy cost through renewable energy production. It sourced 10 percent of the overall construction materials with recycled content and 15 percent with locally regional materials, and the project limited the use of finish that produces off-gas toxins to help indoor air quality, according to the DOT.

The 1.3-million-square-foot CONRAC, contracted by Hawaiian Dredging Construction Co. and designed by Demattei Wong Architects, started construction on April 15, 2016. The project employed more than 200 people onsite and created 500 additional jobs in the industry.

In 2010, English (Hana, East and Upcountry Maui, Molokai, Lanai and Kahoolawe), then-chairman of the Senate Committee on Transportation, International and Intergovernmental Affairs, introduced a bill along with co-sponsor Baker (South and West Maui) that would provide funding for rental car improvements statewide. It paved the way for the rental car charge, which supported Maui’s CONRAC, along with a nearly complete $330 million CONRAC project on Oahu.

“The longer you’re in the Legislature, you actually get to see something from its infancy, become this,” Yamashita said, motioning to the new facility. “I’m just so happy that Maui is the beneficiary of the first one, and it will probably be one of the best ones.”

Economic Development and Budget Committee Chairwoman Keani Rawlins-Fernandez guides budget deliberations on April 29. The council’s $823.6 million budget is up for first reading on Friday and is close to $43 million, or 5.5 percent, higher than Mayor Michael Victorino’s proposal. The Maui News / COLLEEN UECHI photos

Council Member Riki Hokama speaks out against the council’s budget proposal on April 29.

Haylee Boverman surfs on her way to a win in the U14 girls division and a third-place finish in open women. Tomi Tsuda photo

Baldwin High School’s Jacsen Donohue had 32 goals in 14 matches this year, including eight in three state matches as she helped the Bears finish in sixth place. The Maui News / ROBERT COLLIAS photo

Kahului Airport tram driver Melanie Burgess makes sure her riders are all aboard before leaving the new Kahului Airport Consolidated Rent-A-Car (CONRAC) Facility for the short ride to the Departures and Arrivals Stations Tuesday morning. The $340 million facility was officially dedicated Tuesday and opens to the public today. The Maui News / MATTHEW THAYER photos