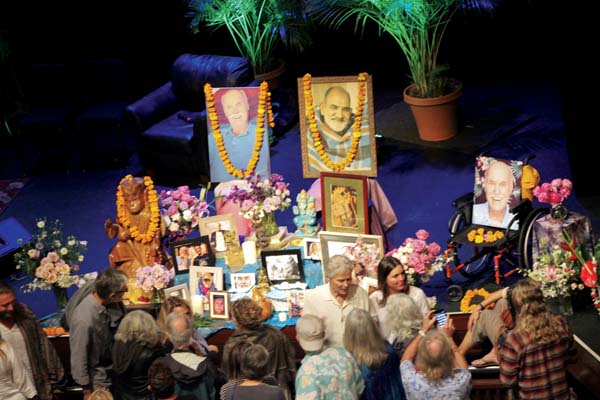 More than a dozen photos of the late counterculture icon Ram Dass are surrounded by flowers on the stage at the Castle Theater at the Maui Arts & Cultural Center. A “Celebration of Love” was held Monday to remember Dass, who died Dec. 22. The Maui News / MELISSA TANJI photos

KAHULUI — Counterculture icon and spiritual leader Ram Dass, whose teachings are familiar to millions around the world, was remembered Monday afternoon at a “Celebration of Love” at the Maui Arts & Cultural Center’s Castle Theater.

Dass is known for his iconic book “Be Here Now,” published in 1971, which focused on spirituality, yoga and meditation. It sold more than 2 million copies.

People from New Orleans, New Jersey and Molokai journeyed to the celebration. Some guests brought flowers and wore flower lei to take part in the ceremony filled with prayer, music and speeches on a stage adorned with flowers and more than a dozen photos of Dass.

There were chants of oms and recitations of “namaste,” or “I bow to you,” a respectful greeting in India, from the stage. 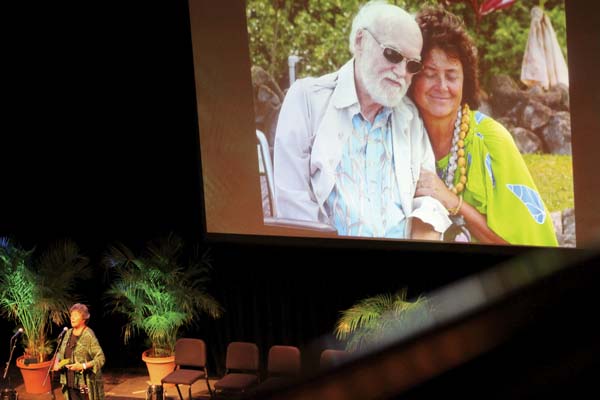 A photo of Ram Dass with Hawaiian spiritual leader and educator Lei‘ohu Ryder is visible on a large screen at the Castle Theater of the Maui Arts & Cultural Center as Ryder sings at his memorial service.

A trip to India in 1967 introduced Alpert to yoga, meditation and spiritualism. He received the name Ram Dass from a guru there; it means “Servant of God.” He then crisscrossed America, lecturing and bringing the teachings to the West.

Wailuku resident Rebecca Lowell felt it was important to be at the celebration; Dass’ teachings have been with her since reading “Be Here Now” in 1971.

“I loved it,” she said of the book and even reordered it on Amazon after his death.

Lowell, who waited outside the theater to get a seat along with hundreds of others, also attended Dass’ events and listened to his speeches live. She read Dass’ book while pregnant with her first child in Northern California and passed down Dass’ teachings to her two children, who are now grown.

A slideshow of Dass’ life played at the beginning of the ceremony with images showing him as a youngster, gaining tenure at Harvard University, playing golf, into his older years as he spread his teachings and later his swims off Maui’s shores.

Back in the 1960s, Dass conducted LSD experiments as a young psychology professor with colleague Timothy Leary. They were both kicked out of Harvard for their activities.

But Albert and Leary were able to influence a generation to “turn on, tune in and drop out” with psychedelics providing “inner fuel” during a turbulent era of social change, sexual liberation and political unrest, according to his Love, Serve, Remember Foundation.

In 1997, he suffered a hemorrhagic stroke that left him with paralysis and expressive aphasia — a partial loss of the ability to produce language. He recovered to the point where he was able to continue to teach.

Raghu Markus, the executive director of Dass’ foundation, recalled pushing him in a wheelchair after a talk in Los Angeles, before Dass made his move to Maui.

Dass was tired so Markus pushed the chair as fast as he could through the crowd of people. But then Dass jammed on the brake.

“He looked at me, ‘are you out of your mind,’ “ Markus recalled Dass saying.

“He just hung out with those people, no matter what and gave whatever he had. That’s who Ram Dass is,” Markus said at Monday’s celebration.

Markus also remembered Dass always saying: “It was OK to be human,” and “it’s OK.”

He recalled the time the two of them were living in the Himalayas and participating in a meditation course with others. Dass sat with each person, one by one, and told them to tell him whatever they thought they couldn’t say out loud. The walls were thin, so everyone could hear the responses.

“In the end, we all found we were not alone. Many of the same dark thoughts was going out of each person,” Markus said. “His honestly and his level of being able to share his foils made it OK for us.”

In 2004, Dass had a medical emergency on Maui which put him in the hospital for a month. After than, he made Maui his home, regularly going for swims at Maui beaches with his followers.

He befriended Hawaiian spiritual leader and educator Lei’ohu Ryder, who spoke and sang at Monday’s celebration.

She recalled an encounter where he cried, “just like the rains” falling Monday at the celebration. Dass was so touched by Maui that he shed tears in front of her.

“This is why I came to Maui,” she remembered Dass telling her.

The raindrops at the celebration were “tears from heaven” that are “blessing and cleansing us,” she said.

Kamehameha Schools Maui goalkeeper Gabriel Arcas slides to make a save and rob Mililani’s Jvon Cunningham of a goal in the first half of a state tournament first-round match Monday at Kanaiaupuni Stadium. Also on the play are the Warriors’ Trenton Kiesel and Trojans’ Max Scott. The Maui News / MATTHEW THAYER photos

The Warriors’ Ikua Kamaka dribbles away from the Trojans’ Brandon Flores in the second half Monday.

Murder suspect Heather Glennon’s boyfriend, Jason Gallegos, talks with his attorney, Damir Kouliev, during a preliminary hearing Monday in Wailuku District Court. One charge of first-degree terroristic threatening was upheld against Gallegos, while four other felony counts were dismissed.

Murder suspect Heather Glennon appears in Wailuku District Court for a preliminary hearing Monday. Witnesses testified she struck a 51-year-old man in the head the night of Feb. 2 in the McDonald’s parking lot on Wainee Street in Lahaina. She is helped being seated by her attorney, David Wiltsie. The Maui News / LILA FUJIMOTO photos

More than a dozen photos of the late counterculture icon Ram Dass are surrounded by flowers on the stage at the Castle Theater at the Maui Arts & Cultural Center. A “Celebration of Love” was held Monday to remember Dass, who died Dec. 22. The Maui News / MELISSA TANJI photos

A photo of Ram Dass with Hawaiian spiritual leader and educator Lei‘ohu Ryder is visible on a large screen at the Castle Theater of the Maui Arts & Cultural Center as Ryder sings at his memorial service.